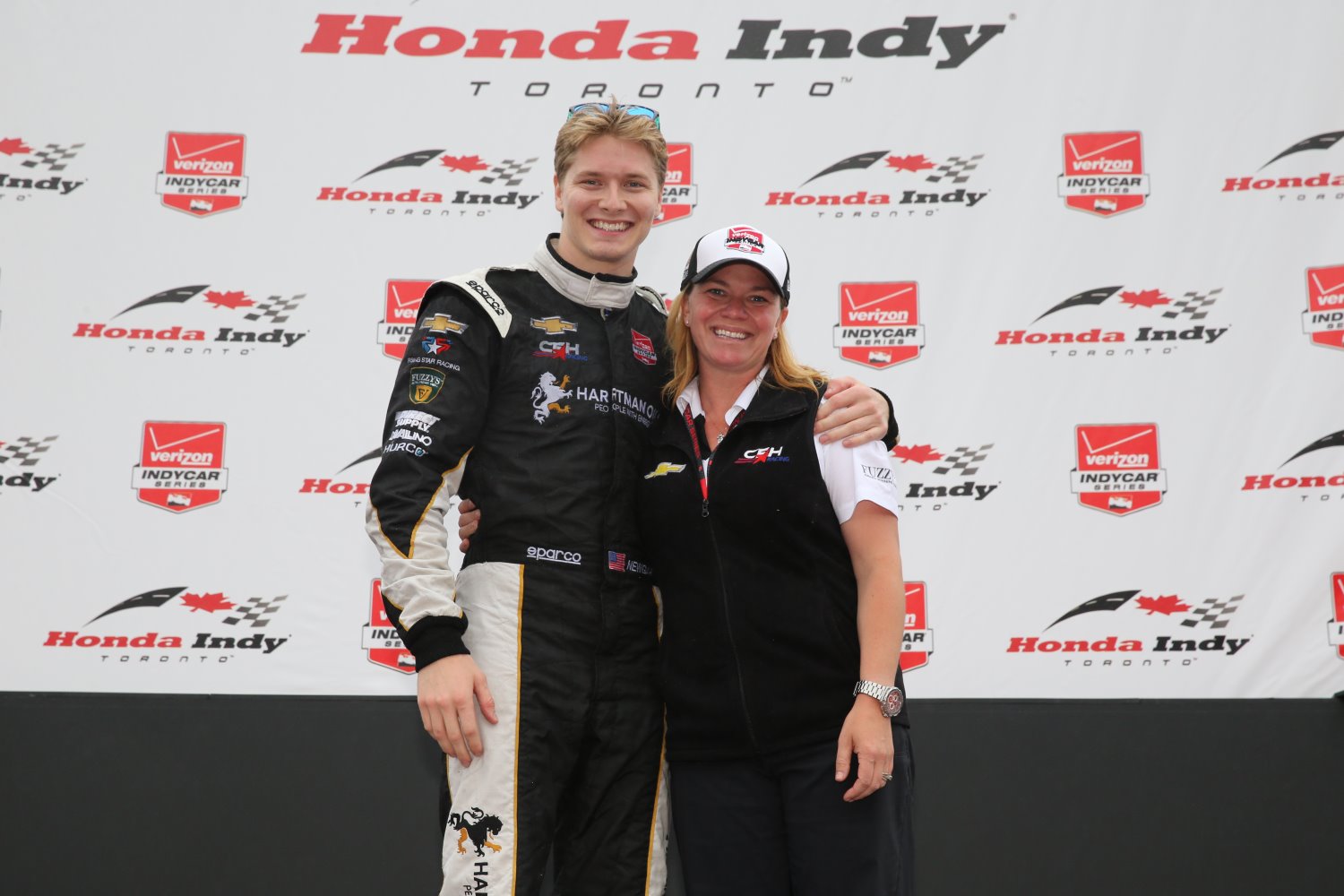 We saw one fine motor race Sunday afternoon at Exhibition Place in Toronto. Variable weather conditions, mostly-clean yet still aggressive driving in said conditions, and a popular young American scoring an impressive second career victory are but a few of the topics we'll get to from this weekend's Honda Indy Toronto. But we begin with a less-than-uplifting subject for about half the Verizon IndyCar Series teams.

If you're someone who appreciates competition between different makes, well, you weren't going to find that at the front of the field Sunday. Sure, Rodolfo Gonzalez parlayed clever pit strategy to find himself in the lead briefly, and Carlos Munoz was running second prior to an engine failure.

But when the highlight of the weekend is the pre-race warm-up, then it probably wasn't a great weekend. Ultimately, Chevrolet would capture the top-8 finishing positions.

Of course, much has been made of the proud marque's 2015 struggles. Most seem to believe the problems stem from an uncompetitive body kit, and have directed the blame squarely at designer Wirth Engineering. Whether that is true or untrue, Honda is clearly behind Chevrolet, and the situation has shown signs of deteriorating in recent weeks with Honda teams and drivers grumbling about the current state of affairs.

Well, that state of affairs didn't improve this weekend. Prior to Toronto, Honda had managed at least one car in the top-5 in qualifying or the race at each event. Granted they were saved sometimes by say the fabulous drive of Graham Rahal at the GP of Indy, when the fastest Honda qualifier was Jack Hawksworth – 11th.

[adinserter name="GOOGLE AD"]But there was no such shining light this weekend. Honda had a best qualifying effort of 8th (Takuma Sato) and best race finish of 9th (Rahal). For the record that was the 5th time in ten races, Rahal has been the top-Honda finisher. While that's great for Rahal, it's pretty sobering news for Honda.

My question now is where does this go with six races remaining? With teams and drivers already grumbling about the poor performance and media reports leaking about dissatisfaction between in the Honda camp with IndyCar, where does this go? Because as Toronto would indicate, this situation looks like it may continue to get worse before it gets better.

Of course, another oft-cited reason for Honda's struggles is the quality of Chevrolet drivers. Josef Newgarden, a Honda man prior to 2015, switched to the Bowtie camp with the CFH Racing merger in 2015.

Running 10th on lap 30, the 24-year-old Tennessee native came into the pits seconds before a James Jakes spin resulted in a caution. The stop allowed Newgarden to shuffle to second-place behind Helio Castroneves. When Castroneves pit, Newgarden found himself in the lead. Other than a hair raising moment with teammate Luca Filippi and frustration running behind Gonzalez, Newgarden would control the second-half of the race and score his second career win.

Now, Newgarden displayed a certain maturity in losing his patience with Gonzalez and not being overly-combative with Filippi. However, the question with young Josef is whether Barber and Toronto are signs of more wins to come? Are they signs that young Josef has what it takes to become a regular winner, contend for championships and become the face of a sport that so desperately needs his wholesome all-American charm?

While 2015 has been the breakout many have long anticipated, I'd argue Young Josef is still not ready to take the fight to the likes of Will Power, Scott Dixon, Juan Pablo Montoya, etc. on a week-to-week basis. While there are a few things I can cite, one clear one is Newgarden's qualifying, in which he has a mere one top-5 finish (Barber).

Power, for example, has led 7 of 10 races in 2015, Newgarden only 2. Also, Power has started first or second in 9 of 10 2015 races. While the 2014 champion's qualifying record matches that of anyone who has ever raced Indy cars, it is indicative of an area in which Newgarden still needs to improve to take that next step.

I get that there was some disappointment over the single-file start for Sunday's race. Personally, I'd offer that standing starts are the way to go for any road or street course, but that's a different subject. Clearly, starting a motor race single-file is less than ideal, and this particular start was relatively ragged.

However, given the wet, the very tight turn 1 at Exhibition Place, and the fact the Toronto race historically has been something of a demolition derby, I agreed with the decision by Race Control to employ the single-file start. Simply put, the single-file start GOT THE RACE GOING, and got it going without incident. And ultimately, that decision probably helped produce the quality show we saw.

As for quality wet-weather driving

Sunday's Indy Lights Presented by Cooper Tires Race 2 was run in very wet conditions. There were numerous spins and instances of over-exuberance, as you might expect from a development series in such weather. Ultimately, all but two drivers managed to run the race without incident.

As their competitors regularly spun, ran into each other, and generally made a mess of things Spencer Pigot, who won both Lights races and championship leader Jack Harvey, who finished second both days, never put one wheel wrong. The two ran fast in the parts of the track they could find speed and tip-toed through the slippery parts. Ultimately, Pigot and Harvey both finished more than a minute ahead of third-place Ed Jones, making it very clear who the best drivers on the track were.

Formula E championship leader Nelson Piquet Jr. was running every bit as well as Pigot and Harvey Sunday, when he was taken out of the race for a second straight day. The Brazilian of course started from pole Saturday and was taken out of the lead as R.C. Enerson made contact, resulting in a spectacular crash. With some better fortune, it very easily could have been a double-podium weekend for Piquet.

At the very least, I applaud Piquet for jumping at the opportunity to fill in for Carlin regular Max Chilton, who was at the 24 Hours of Le Mans. Whereas others might have “big-timed" the notion of driving in a junior series, and I doubt he was paid a king's ransom to drive Indy Lights, Piquet once again showed himself to be one of the more diverse drivers of this era.

And when you think that Piquet was on the podium two weeks ago in the Fort Lauderdale Red Bull Global Rallycross race, won the Moscow ePrix a week later, won the Lights' pole Saturday having never driven the car prior to Friday, and could win the Formula E championship next weekend in London, I have to ask: is anyone currently driving race cars better than Piquet?

RACER's Robin Miller wrote a very compelling article Monday about the toll the current condensed schedule takes on people on IndyCar teams. Did anyone also notice, there was an article discussing the subject on IndyCar.com Wednesday. Interesting!

And none of the above takes into account time at the shop in between or travel to-and-from. Throw in more repairs on cars in 2015 due to the aero kits, and suffice to say, that's a grueling stretch.

As I wrote late last year, I vehemently disagree with Hulman & Co. CEO Mark Miles' shortened calendar. Like seemingly everyone else, I believe a better approach would be to take the current number of races and spread them out over six-and-a-half to seven months, specifically targeting an earlier start to the season.

Secondarily, Miles's heavy-handed, heels-firmly-dug-in approach to this BCG Leviathan he has forced upon everyone, has fostered apathy and undermined whatever good his tenure may have wrought.

That said, I will offer the following:

If Miles is insistent on continuing this five-month atrocity, he would be wise to consolidate to say 12 races. And while I would hate to see so few events, I think anyone who follows the series regularly could name 4-5 races hanging by a thread.

Why not take the 10-11 or so events that seem to be on firm footing, add in Boston and go racing? If you insist on having a shorter calendar, it would probably be wise to have fewer events. The quality of the events would improve, as would certain commercial aspects. For example, if ABC is covering 5 races in an 11-12 race season, your ratings would be better than if they're covering 5 of 16 events and your television numbers diluted. Further, the presentation of the series would be better as the best events would be showcased.

I've been a harsh critic of INDYCAR Race Control throughout 2015. While they were given an assist this week by some very clean driving, there is no Race Control report this week. That and what I said earlier about the start means Race Control had their best weekend of 2015.

I haven't gotten much sympathy for this position in the past and I doubt I will now. However, I do not understand INDYCAR allowing the teams to make decisions about running a given practice session when there are PAID CUSTOMERS in attendance. This happened earlier this season on Friday at NOLA and again Friday in the second practice session, in which the green flag was shown for a wet track. With no rain in the forecast Sunday (that obviously changed), none of the teams decided to turn competitive laps. About halfway through the scheduled session, INDYCAR threw the checkered-flag.

[adinserter name="GOOGLE AD"]Now, if the series decides it's not safe to go green, fair enough. But if the series throws the green and the series is paying these teams to show up and run, then the teams should well, run. Yes, there are extenuating circumstances when a given team can't run. However, INDYCAR leaving the decision to run or not run, again with PAID CUSTOMERS in the stands, up to the teams is silly.

While I suppose you can't force a team to run or not run, you can have minimum standards by which a team receives it's Leaders' Circle money in a given weekend, or what portion of that money a team receives. Although I harbor strong objections to the philosophy of the Leaders' Circle program, that money is there to insure there are entries on a given weekend and those entries run; not to just be pocketed.