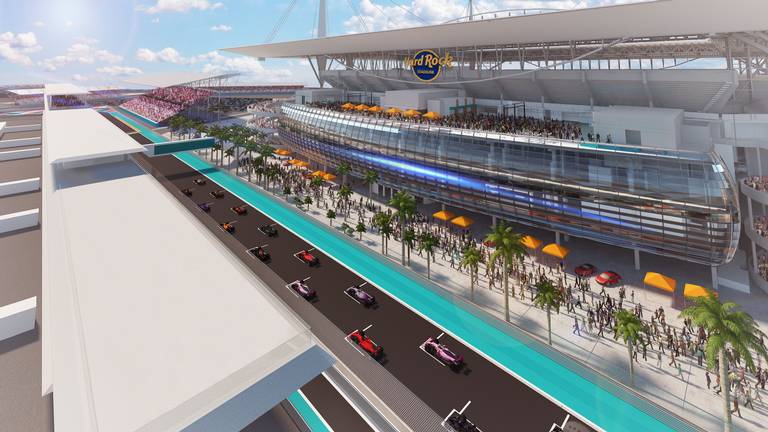 UPDATE Dolphins Vice Chair, President & CEO Tom Garfinkel "hopes to clear the final hurdle" toward bringing an F1 race to Miami Gardens in May '21, as all that remains is receiving "approval from Miami-Dade County Commissioners," according to Hal Habib of the PALM BEACH POST.

South Florida has never held an F1 race, and Garfinkel said, "Formula One is globally one of the most popular sports in the world and bringing a Formula One race would be one of the biggest events you can bring" PALM BEACH POST,

In Ft. Lauderdale, Safid Deen notes the Miami-Dade County Commission "could table the idea later this month during its next commission meeting set for Oct. 29."

The agreement "could rectify" F1's "previous attempt to host a race in Downtown Miami, which would have been held in the Biscayne Bay and Bayfront Park areas." But the proposal was "met with strong opposition by local residents and businesses in the area because of the obligations needed to construct and upkeep a potential race track in the area."

The Hard Rock Stadium campus "would house" the majority of the F1 race track, and be funded by Dolphins Owner Stephen Ross. Protesters opposing the race included former Miami-Dade Commissioner Betty T. Ferguson, who said that it "could affect surrounding residents and be 'environmentally devastating' to the community" South Florida SUN SENTINEL

Earlier this year, it became clear that Liberty Media's plans for a race in downtown Miami were now dead. The Miami Herald reported that disruption in the city in Florida "would be too great".

However, it then emerged that F1 was looking at an alternative Miami venue – Hard Rock Stadium, located north of Miami in Miami Gardens.

"We are thrilled to announce that Formula 1 and Hard Rock Stadium have reached an agreement in principle to host the first-ever Miami grand prix," Tom Garfinkel, CEO of the Hard Rock Stadium and the Miami Dolphins, announced.

Like F1's first Miami project, there are hurdles. The Miami Herald said even district commissioner Barbara Jordan and Miami Gardens mayor Olivier Gilbert are opposed to the plan.

Bratches, though, is confident. The circuit would be funded by Hard Rock Stadium owner Stephen Ross, with the race held mostly on stadium grounds.

"Hosting the race at the stadium site limits the work that has to be done to public streets, which means very little disruption to surrounding residents and businesses as we prepare for the race," said Bratches.

All that’s left? For Miami-Dade County to drop the green flag.

A race months in the making is one step closer to reality. Formula One has finalized an agreement in principle with Hard Rock Stadium to bring annual F-1 racing to South Florida beginning in May 2021, the Miami Herald reports.

“We are thrilled to announce that Formula One and Hard Rock Stadium have reached an agreement in principle to host the first-ever Formula One Miami Grand Prix at Hard Rock Stadium," Dolphins CEO Tom Garfinkel and Sean Bratches, F-1’s managing director of commercial operations, said in a joint statement. “With an estimated annual impact of more than $400 million and 35,000 room nights, the Formula One Miami Grand Prix will be an economic juggernaut for South Florida each and every year.

“We are deeply grateful to our fans, elected officials and the local tourism industry for their patience and support throughout this process," Garfinkel added. “We look forward to bringing the greatest racing spectacle on the planet for the first time to one of the world’s most iconic and glamorous regions."

There has been pushback from Miami Gardens residents, Commissioner Barbara Jordan, whose district includes Hard Rock Stadium, and the mayor running to replace her, Oliver Gilbert. Both Jordan and Gilbert have come out publicly against holding the event.

Jordan proposed legislation to require a commission vote before Formula One could win county approval for temporary closure of Northwest 119th Street during race weekend. A decision on the legislation could come later this month.

A once-fraught relationship between the Dolphins and the surrounding community has improved significantly in the past three decades, but the team and a group of neighbors, led by community activist Betty T. Ferguson, disagree on whether the event should be held at Hard Rock Stadium. Ferguson led a protest against the race Sunday at the intersection of Northwest 27th Avenue and 199th Street.

Residents fret about traffic, noise and pollution. They have an advocate in Jordan, who has otherwise been a longtime ally of the Dolphins and voted in favor of bringing F-1 to Miami-Dade last year.

Organizers argue the race is mostly self-contained on stadium property, not in close proximity to local residences, and short-lived, with races lasting only two to three hours one weekend per year, while showcasing Miami Gardens and the South Florida region to the world.

And then there’s the economic benefit, which planners say will be on the scale of a Super Bowl.

Leaders of the region’s hospitality and tourism industry, which typically sees a slowdown following the peak winter months, are thrilled about the prospect of joining an elite list of F-1 host cities, which include Monaco, Singapore, and Barcelona, among others.

Kallergis spoke on favor of F-1 coming to Miami on behalf of the hotel industry at a recent county commission meeting.