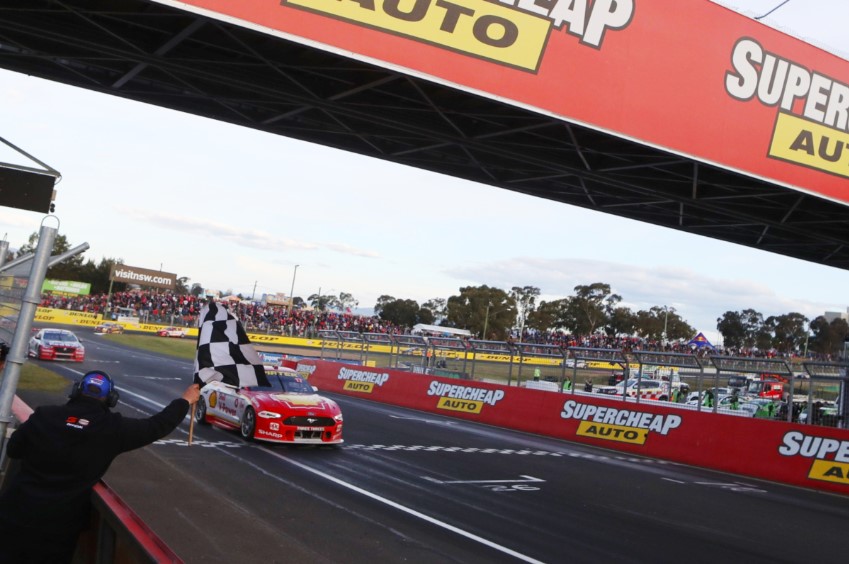 Scott McLaughlin and Alexandre Premat have the Supercheap Auto Bathurst 1000 after holding off Shane van Gisbergen on a final lap restart.

What started as a relatively straightforward race became completely unpredictable in the final 40 laps, with Safety Car after Safety Car allowing the IndyCar drivers to finish 19th instead of next to last.

When Andre Heimgartner crunched his Nissan into the wall at Forrest’s Elbow with the leaders on their 158th lap, the Safety Car was called for an eighth time.

It crawled around Mount Panorama such that there was time for one more green flag lap, at which point McLaughlin led van Gisbergen, James Courtney, and Jamie Whincup.

The #17 Shell V-Power Mustang led the #97 Red Bull HRT ZB Commodore across the control line by 0.31s to start the 161st and final lap.

McLaughlin kicked up the dust at McPhillamy Park but had an advantage of 0.61s at the second sector, located at the exit of Forrest’s Elbow, and eventually got home by 0.68s.

The victory is his and Premat’s first in the Supercheap Auto Bathurst 1000, and the first for DJR Team Penske in its current guise, after Dick Johnson Racing last won in 1994.

“So proud of everyone at Shell V-Power Racing; we made a bloody good car.

“I’ve dreamt about this; dreamt about standing on that roof and this guy (Premat) was unbelievable today with those main drivers. I was a little bit stressed.

Premat added, “That was so stressful. That was insane. Everything was gambling, gambling. That was crazy.

“I’m so happy for Shell V-Power to win this race for sure with DJR Team Penske. It’s been 25 years that they didn’t with Bathurst. It’s magic. Magic."

Van Gisbergen and Garth Tander were classified second, Courtney was just over a second back in the #22 Mobil 1 ZB Commodore which he shared with Jack Perkins despite bumping the wall at one stage, and the Red Bull HRT pairing of Whincup and Craig Lowndes were fourth in the #888 ZB Commodore.

Premat became the first Frenchman to win Bathurst and one of the few internationals to stand on the top step.

“Everything was gambling, gambling, that was crazy," Premat said. “It’s magic, magic."

It was the first victory for Dick Johnson Racing, now known as DJR Team Penske, and US magnate Roger Penske who bought into the team four years ago.

The last time Johnson won at Mount Panorama was in 1994 when the Australian icon beat Craig Lowndes and Brad Jones home with co-driver John Bowe.

“It’s one off the bucket list now, what a great Champion," Penske said. “I just can’t believe what is going on here, it is just so exciting."

When American wildcard Alexander Rossi sparked a safety car on lap 135 it threw the race into a battle of fuel as most of the front-runners, aside from Van Gisbergen, were a few laps short of having enough to get them home.

Van Gisbergen’s team-mate Jamie Whincup was one of those.

He led the race at that point after McLaughlin stalled in the pits.
But he had to return late in the race to top up, no doubt with memories of the last time he ran out of fuel when leading Bathurst.

That left McLaughlin and Van Gisbergen to battle to the end.

The hard luck story of the day was with team-mates Chaz Mostert and Cam Waters who crashed into each other on lap 102 just when both were pushing McLaughlin and Whincup.

The pair were running third and fourth, with both looking at a podium or even more depending on what happened in the closing stages.

“We were trucking along for a podium, we were fuel saving and Chazzy was obviously trying to race me to pass me. I don’t know what to say, the car was fast, we should have been on the podium."

It appeared to work in Whincup’s favour at the time with the safety car allowing him to save valuable fuel and maintain the lead he took in the pits under the previous safety car.

A second safety car straight after the resumption, when Penrite Racing’s Anton De Pasquale slammed into a wall when his throttle jammed, helped with more fuel conservation.

That was before the Rossi safety car under which they all pitted but appeared to be a lap or two short on the fuel needed to finish. One of those was Whincup.

The rest ended in McLaughlin and Premat’s extraordinary victory.

The IndyCar drivers Alexander Rossi and James Hinchcliffe finished over 2 laps (over 7-miles), behind as they return to the USA with their tails between their legs, soundly humiliated.

McLaughlin also extends his lead in the Virgin Australia Supercars Championship beyond two events’ worth with three to go, the next being the Vodafone Gold Coast 600 on October 25-27.