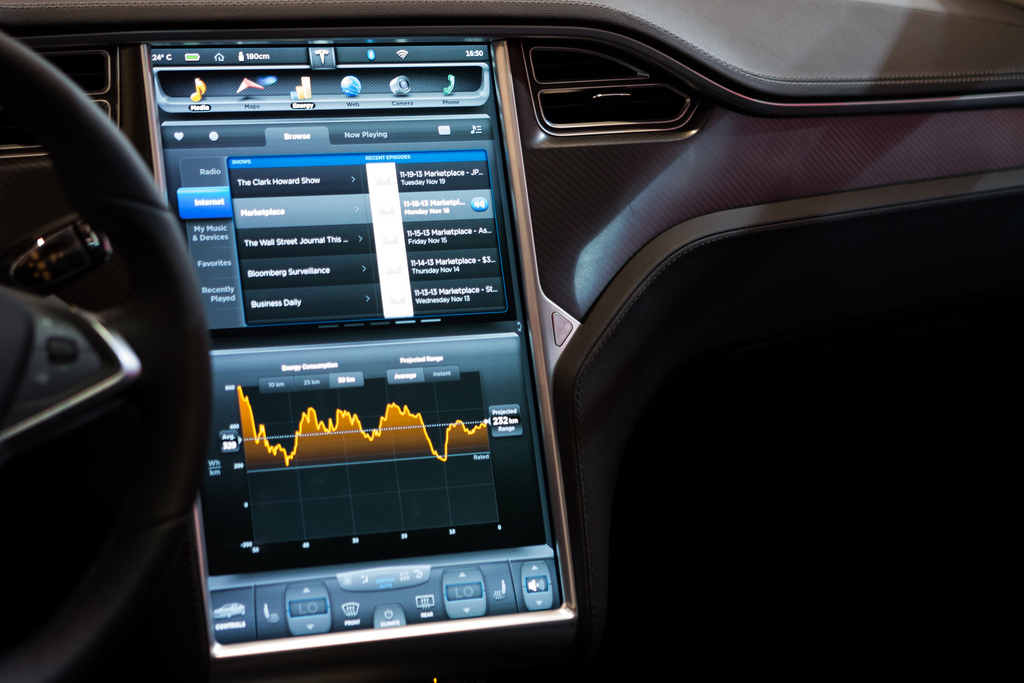 This rumor is upgraded to 'strong' today. Apple Inc. is accelerating efforts to build an electric car, designating it internally as a "committed project" and setting a target ship date for 2019, according to people familiar with the matter, reports Daisuke Wakabayashi of the Wall Street Journal.

The go-ahead came after the company spent more than a year investigating the feasibility of an Apple-branded car, including meetings with two groups of government officials in California. Leaders of the project, code-named Titan, have been given permission to triple the 600-person team, the people familiar with the matter said.

Apple's commitment is a sign that the company sees an opportunity to become a player in the automotive industry by applying expertise that it has honed in developing iPhones-in areas such as batteries, sensors and hardware-software integration-to the next generation of cars.

Details are scant on whether Apple will rely on manufacturing partners the way it does for the iPhone and various other products. Reuters reported this summer Apple execs toured BMW's German i3 manufacturing plant last year, but left without striking a deal.

Automobiles are arguably one of the few untapped markets big enough to significantly move the needle for Apple, whose FY15 (ends in September) revenue consensus stands at $233.1B.

Tesla needs cash and Apple has a lot of it. If not for Elon Musk's ego getting in the way, Apple buying Tesla and combining the might and technology of the two companies is a match made in heaven. Doing their own car from scratch, rather than taking what Tesla has started and building up from there (including the great technology we noted below) is ambitious. AR1 Staff report

The report of the fuel cell powered iPhone 6 contained important clues about the technology. The fuel cell was built by Intelligent Energy (IE), a British startup with reported close ties to Apple. The ultra compact hydrogen fuel cell they built fit into the space allotted for the battery of the current iPhone and could power the phone for a full week.

The report also indicated that the hydrogen was stored at low pressure in some form of powdered medium. The fuel cell could be refilled through an gas inlet port converted from the headphone jack.

Intelligent Energy's iPhone fuel cell demonstrates impressive energy density, able to store about 4 KWh/liter. If the technology scales approximately as the current device, which is likely, then a gallon sized container would hold about 15 KWh. Just 6 of these gallon containers would store as much energy as the Tesla Model S 85 KWh battery pack.

Although Intelligent Energy made the iPhone fuel cell refillable, it considers the best option for the future to be sealed cells that would be user replaceable. IE already markets a USB recharging system based on similar technology, called Upp, in the U.K. The Upp system uses metal hydride powder as the hydrogen storage medium.

I mentioned the gallon size battery pack because that's a reasonable size for something that could be swapped into an EV by a user. Each cell is a self-contained battery pack, so there's no messing with filling the vehicle with high pressure hydrogen gas. Because the cells are completely sealed low pressure devices, they could probably be sold anywhere. The Upp system and fuel cell cartridges are sold at Apple stores in the U.K.

Also very impressive is the weight of the cells relative to the Tesla battery pack. The 85 KWh Model S battery pack is estimated to weigh about 1200 lbs. For a similar 85KWh of storage (6 gallon modules using the iPhone cell technology), the weight would be about 1/10th of that.

The concept of lightweight, sealed fuel cells that are user replaceable completely disrupts the current paradigm of vehicle refueling. The IE fuel cell technology eliminates the need for special stations that provide fossil fuel, or even hydrogen or high speed battery charging. The cells could be made available through any retailer willing to participate in a cell exchange program with the maker of the cells.

Not only does this solve the problem of infrastructure availability, but it provides owners with a convenient way to eliminate range anxiety. Planning a long trip? Throw a few extra cells in the trunk.

The IE technology also appears to be safer than the fossil fuel alternatives and high pressure hydrogen fuel cell vehicles. Probably, the safety of the IE fuel cells is on the order of Tesla's demonstrated and enviable safety record.

Closer Than We Thought

When rumors first appeared about the Apple car, I wrote in Apple's Electric Vehicle Opportunity that an Apple car was about 5 years away. Lately, there have been indications that this timeline might be shorter. Reports of Apple's discussions with BMW and Daimler suggest that Apple's route to an EV will be very different, and potentially much faster than Tesla's.

It's been clear that Apple would not try to build its own manufacturing capability from scratch, as Tesla has done. Apple would need a manufacturing partner for an EV just as it does now for its other products. Even with a manufacturing partner, development of an all new vehicle from scratch, all the design and engineering, would have been a daunting task for a company inexperienced with building automobiles. Assuming that this could be done in 5 years was probably generous.

Instead, Apple appears to be searching for a preexisting platform on which to base an EV. The lifts a lot of the design and engineering burden from Apple's shoulders. It also means that much of the production capacity would already be in place at the manufacturer's facility.

Apple needs an automobile manufacturer as a partner for another very important reason: distribution. Apple really can't sell the Apple car through its stores. As the Tesla experience has shown, people expect to be able to take their cars to the dealership for servicing. Apple stores couldn't provide that.

So Apple needs a manufacturing partner with a dealership network that can stock a reasonable selection of vehicles for customers and provide service for the customers. Apple wouldn't try to do that from scratch. Selling an Apple branded car through the partner manufacturer's dealership network is a much better option.

Wanting to partner with the likes of BMW or Daimler only makes sense. These are well known premium brands that also maintain substantial global networks of dealerships, especially in the U.S. So far, discussions appear not to have come to fruition.

I expect that they will eventually, if Apple really has gotten exclusive rights to IE's fuel cell technology. IE's technology promises to be the Holy Grail of EV: an electric vehicle technology that provides long range, easy refueling, and which doesn't require an enormous investment in refueling infrastructure. Mark Hibben/Seeking Alpha