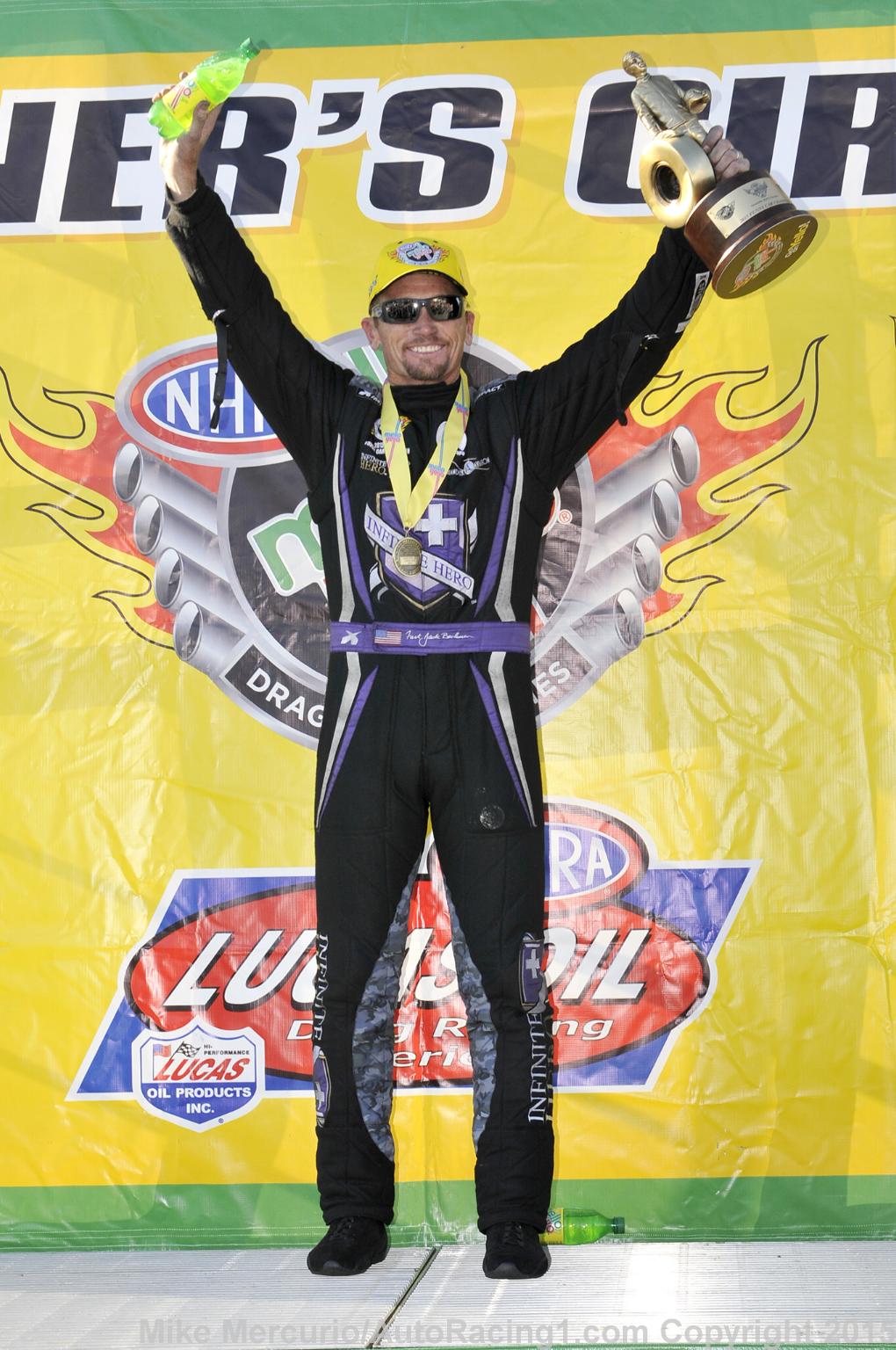 Sunday’s finals took advantage of zMax Dragway’s status as the only four-wide dragstrip on the NHRA circuit, with each elimination round featuring four "quads" of four drivers roaring down the quarter-mile with as much as 10,000 horsepower apiece.

Beckman beat out Del Worsham, Chad Head and his DSR teammate Tommy Johnson, Jr. in the Top Fuel final to collect his 16th-career NHRA Funny Car victory, posting a time of 3.983 at 308.78 mph for his second Four-Wide Nationals victory.

[adinserter name="GOOGLE AD"]Beckman was the last car off the line but quickly made up ground to take the lead at the 60 foot mark and led the rest of the way, finishing half a car-length ahead of Worsham, who ran 4.012, 314.24 in the loss while Head and Johnson went up in smoke just past the tree.

Beckman’s victory was his first since St. Louis in September of 2012, and was the 100th Funny Car victory for team owner Don Schumacher.

"It’s little bit surreal," said Beckman of his first win in over two years. "I was just saying that once you start rack up wins with some regularity and you expect to win, it’s not a big shock when you go out there and win. I’ve had some great crew chiefs the last three years, and we just haven’t got it done. You never know when your last win is your last win. You’d like to keep thinking that this snowball is going to roll on forever, and then you go two and a half years (without a win) and you start to wonder. Well now, I’m done wondering.

"I can't guarantee we'll win another race this season. I think we will, but I can't say for 100 percent. But, I know for sure we'll be better than we were today. Jimmy [Prock, crew chief] and the team will be even better the rest of the year because they're getting better every race. All the little things are coming together and now the car is doing what they hope it will."

Veteran Pro Stock driver Larry Morgan picked up his first victory in over five years with a win over Greg Anderson, Jonathan Gray and Vincent Nobile in one of the closest races of the day with all four cars finishing within a car length of each other.

The victory was the 10th of Morgan’s career and his first since Las Vegas in November of 2009, a drought of 120 races.

"I knew I was still good enough to let the clutch out," said Morgan. "I knew I could still drive. I just needed to get the right financial backing and hook up with Johnny Gray to get some horsepower. Jerry Haas built me a new car in 30 days, and a lot of other great people helped me get to the winner's circle today. I've surrounded myself with good people, and that's how you win. It wasn't just one guy who won today, it was a team effort."

[adinserter name="GOOGLE AD"]Former Pro Stock World Champion Jason Line set a new National Record ET of 6.455 in the opening round but was eliminated in the semi-finals.

Antron Brown went to the Winner’s Circle for the second straight year with a victory over Steve Torrence, Richie Crampton and Clay Millican to score his first win of the season and 48th of his career.

"It's been an incredible run at this race," Brown said. "You have to dig deep to win races like this. We've had a long road with a new combination. We've had some gremlins, but in the final we laid down the gauntlet to bring the win home. It was also huge for the bossman [Don Schumacher] to double up. I hope we can keep that streak going for him."