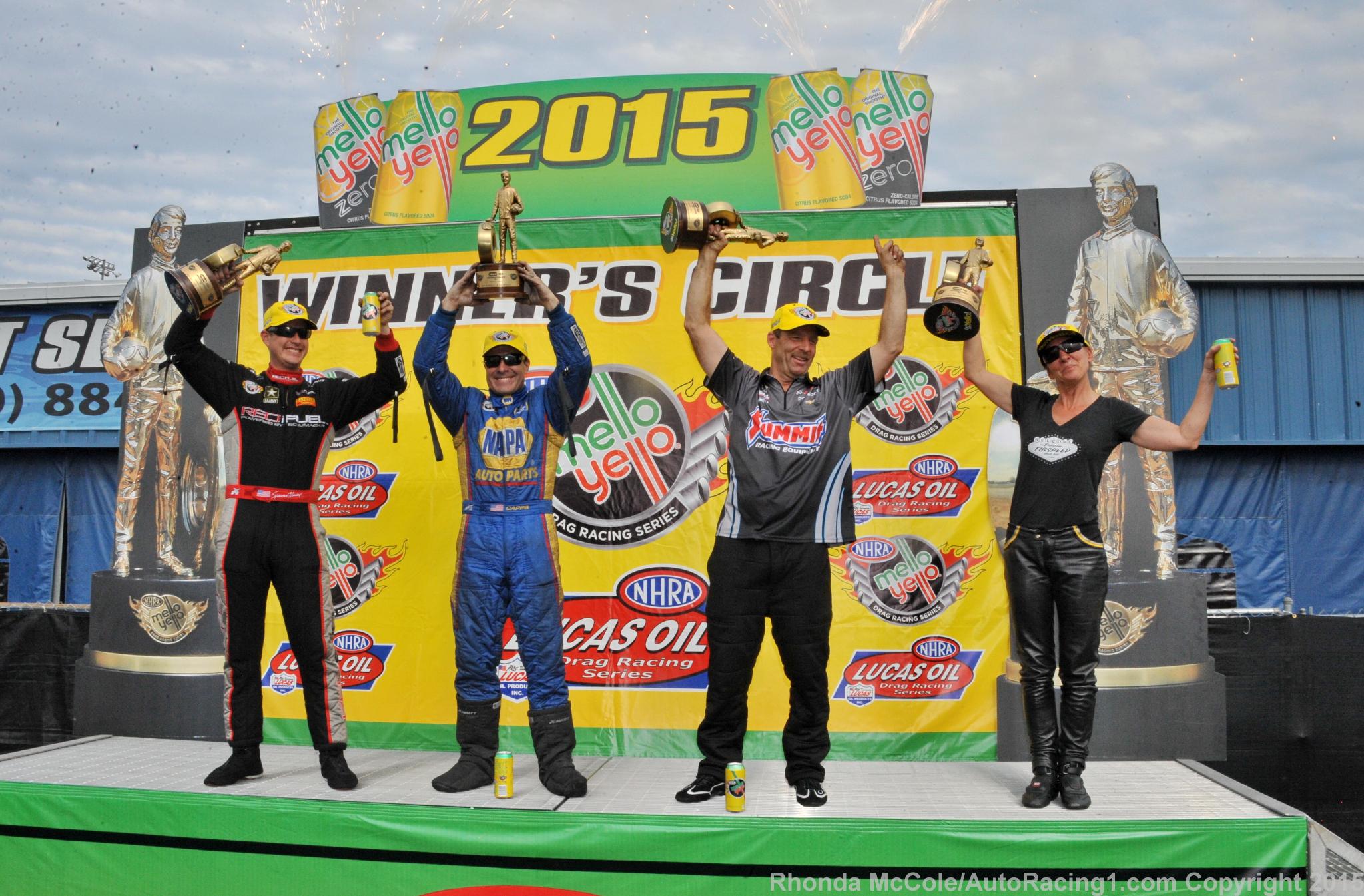 Karen Stoffer made a triumphant return to the NHRA Mello Yellow Drag Racing Series on Sunday, scoring her first win in four years with a victory in the Pro Stock Motorcycle finals in the 46th Annual Amalie Motor Oil Gatornationals at Auto-Plus Raceway in Gainesville, Fla.

Without a sponsor and with only enough funding for the first two races of the season, Stoffer took down three-time World Champion and three-time Gatornationals winner Eddie Krawiec in her first start since the 2012 season finale at Pomona.

Stoffer, who qualified eighth for the event, made it past Steve Johnson, Angie Smith and Shawn Gann before advancing to her first final round since 2012.

In a rematch of the 2011 event, Stoffer and Krawiec met in money round for their three-career final round faceoff.

At the start, Krawiec jumped out to an early lead, but then suddenly pulled up at the halfway mark, allowing Stoffer to flash by for her seventh-career National Event victory , posting a 6.900 at 195.11 mph over Krawiec's 7.884, 122.23.

"We had a lot of heart and a lot of passion," said Stoffer, who last won at Denver in 2011. "We don't have a big budget but we certainly have a big heart. We certainly tried to get some high performance out of it and we were able to do it. The boys worked hard, worked till about midnight each night and gave us a good bike on Sunday."

Anderson – who was forced to sit out last year’s event along with the first five races of the 2014 season following off-season heart surgery – hadn't been to the winner's circle in two years and had yet to advance past the opening round in the first two races of the year.

On Sunday, Anderson looked like the wily veteran again as he bested Larry Morgan, Shane Gray and No. 1 qualifier Chris McGaha to reach his first final round since Seattle in August of last year.

Facing his long-time rival Line in their 23rd final round against each other, Anderson jumped to the lead right at the start of the final and barely beat Line by less than half a car-length at the stripe, clocking in at 6.538 seconds at 213.43 mph over Line, who went 6.554,212.96.

Sunday's win was the third Gainesville victory for Anderson and his first since Englishtown in June of 2012.

"It's a special day and weekend," said Anderson. "It was my birthday yesterday so it's pretty darn cool. A year ago I couldn't even come to this race [due to the surgery]. It was a great day for Greg Anderson, KB Racing and everyone involved with us."

Spencer Massey locked up his first "Wally" of the season with a hole-shot victory over his teammate and four-time Gatornationals winner Tony Schumacher in the Top Fuel final for his eighth-career NHRA victory.

Massey had luck on his side as he beat out Chris Karamesines, Brittany Force and his DSR teammate Antron Brown, all of whom ran into problems during their runs.

[adinserter name="GOOGLE AD"]Facing "The Sarge" in the finals for the third time in his career, Massey was first off the line with a .020 light, and that was all the lead he needed as he powered to the finish with a 3.882 at 320.74 mph

"Tony (Schumacher) has been running really strong," said Massey. "I know that he can step his game up and be deadly when he needs to on the starting line. I had to do whatever I had to do. It worked out. It's just crazy. Just to be able to race against legends and do this, I never want it to end."

In Funny Car, Ron Capps picked up his first win of the year with a win over newcomer John Hale for his first Gainesville victory since 2007.

After defeating Courtney Force on a hole shot in the opening round, Capps eliminated top qualifier Cruz Pedregon and then beat out Tim Wilkerson by just one ten-thousandths of a second to advance to his 87th-career final round.

Running in just his fifth-career Funny Car event, Hale gave Capps a run for his money, leaving the line with a slight advantage and holding his ground until the halfway mark before Capps edged ahead to win by two car lengths, with Capps turning in a 4.115, 311.05 over Hale, who went 4.208, 289.32 in the loss.

"When you've got a race car like today, you almost wait for something to go wrong," said Capps. "I've driven for almost 18 years and I feel like I find myself driving the car as if I am driving something that's just so far behind the other cars. I think that really helped me this weekend."