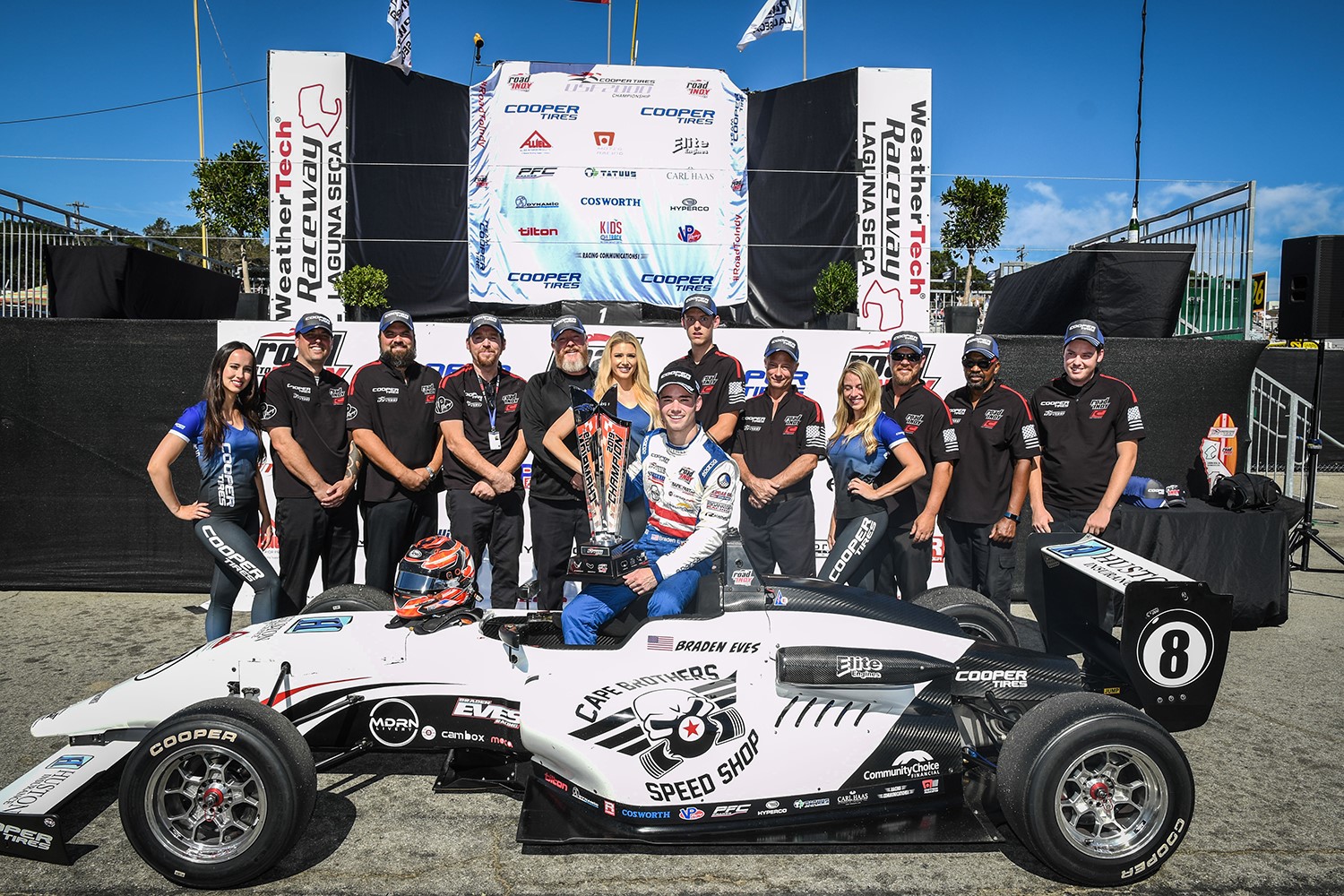 When Cape Motorsports packed up the trailer at WeatherTech Raceway Laguna Seca following the Road to Indy Presented by Cooper Tires finale to put a cap on the 2019 Cooper Tires USF2000 Championship, they did so as nine-time series champions. Following a hard-fought battle throughout the season, American Braden Eves put his Cape Motorsports USF-17 in victory lane on Sunday for the sixth time this season, topping Kiwi Hunter McIlrea for the crown and the Road to Indy scholarship for 2020. Eves finished fourth on Saturday to set up his bid for the title, and then went out and fought tooth-and-nail for the race win to grab hold of the lucrative championship. The win and the title make it nine straight championships for the St. Petersburg, Florida based team, which is the winningest in USF2000 history. Eves joins elite company in Cape’s championship alumni, including Matthew Brabham, Petri Suvanto, Scott Hargrove, Florian LaTorre, Nico Jamin, Anthony Martin, Oliver Askew, and Kyle Kirkwood.

“It seems like a long time ago when we were sitting there at St. Pete waiting for the first session, and there have been a lot of ups and downs throughout the season as always," commented Dominic and Nicholas Cape, the owners of Cape Motorsports. “All of our drivers – Braden, Darren, Jak and Reece – worked extremely hard at every race to improve their craft, and we are very proud of their body of work. As for the team, you’re only as good as the guys around you, and we can’t say enough about their dedication, hard work and constant strive for perfection; we’d like to thank Reg, Colin, Kyle, Scott, Jeremy, Alan, Larry, Mathew, Neil and Wil. It was another hard-fought season is in the books, and we’d like to offer our congratulations to everyone who competed in the 2019 championship and were looking forward to an exciting 2020 season."

The team fielded cars for a quartet of drivers in Monterey, as Eves was joined under the tent by Darren Keane, Reece Gold and Jak Crawford.

Eves’ weekend went as well as possible, as the Ohio driver took the pole for Race 1 as the team leveraged a fresh set of Cooper tires to make sure their young driver would start up front to begin his hunt for the title. Eves ran a strong opening race to gain valuable points, finishing fourth. On Sunday, he started third and attacked for the lead on the opening lap, making an aggressive championship move to the lead. Braden held off all challengers to score the win he needed to take the title.

“What can you say, against all odds, we were talking to someone before the weekend at Laguna started and they asked me what we thought the chances were and we replied, “the cream always rises to the top," offered the Cape brothers, in regards to Braden’s shot at the title. “We have to say with it all on the line at the final race, on used tires against new tires which are a huge disadvantage at Laguna, Braden did what all champions do. He made it happen. We’re all very proud of what Braden has accomplished this year."

Keane capped off a strong season with a pair of top-seven finishes at Laguna Seca to end the season fifth in the championship standings, adding a race win to the Cape’s record books with a tremendous victory in Toronto in July.

“Darren improved immensely on his previous season, and was always in the hunt every weekend, collected his first pole position and his first win," added the team owners. “We’re all really proud of what he has achieved this year and look for Darren to keep improving and fighting for wins."

The team also fielded cars for a pair of 14-year-old rookies in 2019 and they each came away with vastly developed skills and the key experience needed to contend for the championship in 2020. Jak Crawford joined the team at the Mid-Ohio round and has picked up his pace ever since. At Laguna Seca, the Texas qualified sixth and fourth, respectively, and then finished fifth in the Race 1. An opening lap incident in turn 3 sent him to the tail of the field and he finished 15th in the final tally. Despite missing the opening race weekend waiting to become legal age for the series, Crawford finished seventh overall in the championship.

“Jak was on the team for the final three races," commented Dominic Cape. “We talked to his dad in the middle of last year, but nothing really materialized, then we crossed lines before IMS and Jak ended up on another team. It’s always hard to come into a team for the final three races. It takes time to learn the way the team works, communicates, and how a team navigates through a race weekend. Jak did an extremely good job for us."

Reece Gold came to Cape Motorsports after winning the Lucas Oil Formula Car Race Series, and he displayed speed and consistency all year with his focus on developing his skills and experience level ahead of 2020. Reece qualified in the top-10 for both races of the doubleheader in Monterey and he raced extremely well, coming away with an eighth-place finish in the final race of the season. Gold finished 10th in the championship, ensuring that all four Cape drivers were in the top-10 in the standings.

“Reece has come a long way since the first test with us at Palm Beach last November, and he’s improved every weekend and has never stopped learning," Cape enthused. “He met his goals set at the beginning of the season to finish in the top-10 in points, and we’re looking to have another good off-season of improvement before St Pete in 2020."

With their ninth title in the books, the Capes have immediately turned their attention to the 2020 season, which begins now. The Chris Griffis Memorial Test at the Indianapolis Motor Speedway on October 19-20 in the next date on the Cape calendar and those interested in testing with the team should contact the team directly.