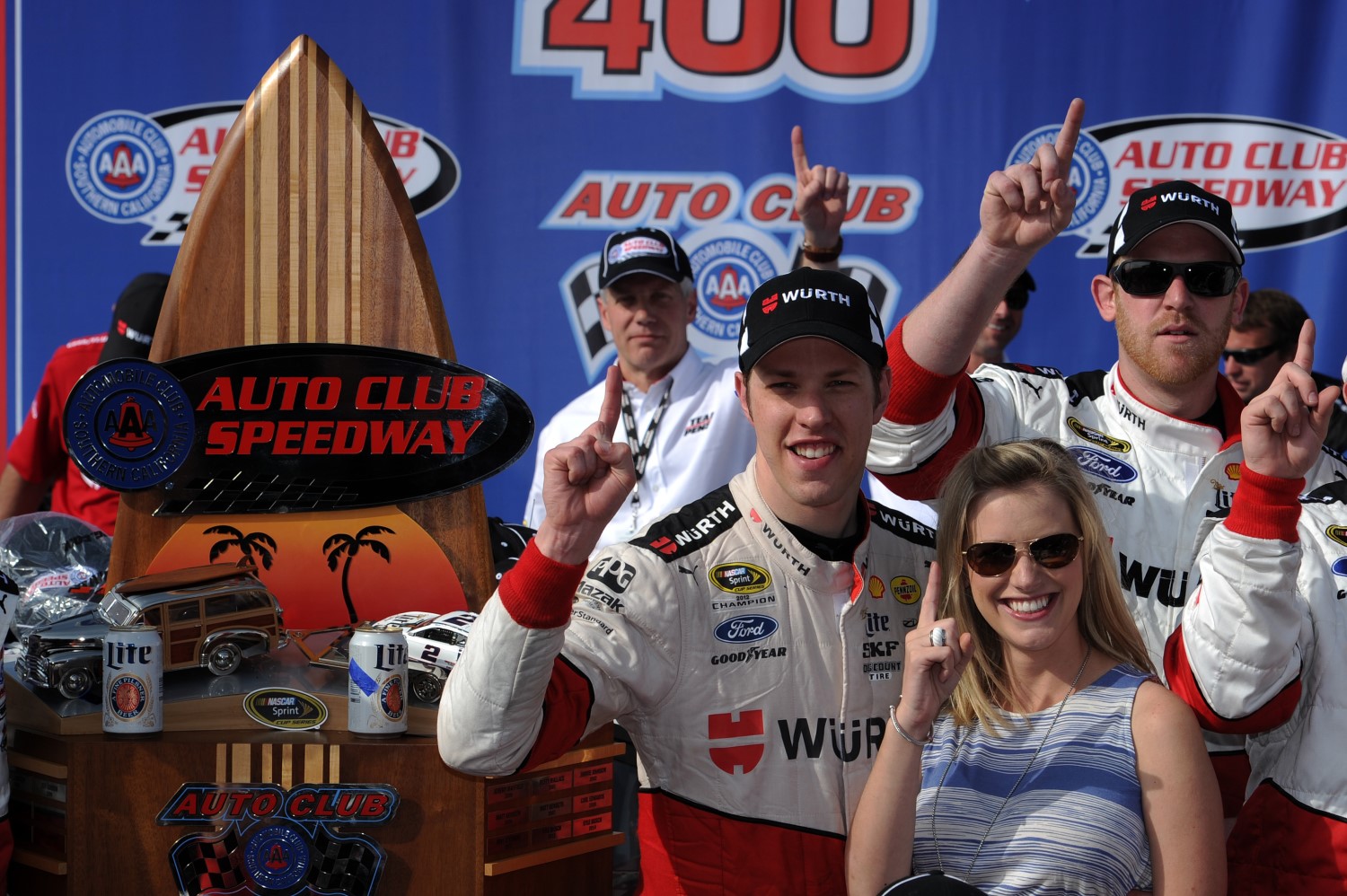 Keselowski began the final restart after the second green-white-checker in sixth position. He was able to charge past Jeff Gordon and Menard into the first turn before moving past Harvick for second coming to the white flag before getting past Busch in turn 2. Busch would make a opportunistic dive to the low side of turn 4 and got into the wall allowing Harvick to move past for second.

This was Keselowski’s first victory at this track. In fact, Auto Club has been just about Keselowski’s worst track on the Sprint Cup circuit. He had taken four tires on his last pit stop while most others took two.

[adinserter name="GOOGLE AD"]"Honestly when I crossed the finish line I just thought, ‘I won at one of Roger’s tracks!’ Thsat’s cool," Keselowski said, referring to his team owner, Roger Penske. Penske built the facilty in Fontana now knonwn as Auto Club.

AFTER WINNING THE LAST TWO RACES IT’S GOOD TO BE DISAPPOINTED FOR SECOND. DESCRIBE THE AFTERNOON FOR YOU GUYS:
“I’m not disappointed at all. I’m just glad to be a part of such a good race there. I’m really happy that all the fans got to come out and see a great finish to a great day. I’m just really proud of everybody on our Jimmy John’s/Budweiser team. You could have flipped a coin as to what the right strategy there was at the end with tires. Just proud of Rodney Childers (crew chief) and the pit crew and everybody for just having a solid day."

ON HIS RACE:
“What a race, just really happy for the fans and everybody who was here at the race track and watching on TV to see a race like that. You just never know how the strategy is going to work out. You are kind of on both sides of the fence there as to what you should or shouldn’t do. If the second restart doesn’t come about then two tires is the right call. But you just never know, just really proud of Rodney (Childers, crew chief) and everybody on our Jimmy John’s/Budweiser team for everything that they do."

WHO MAKE THE DECISION FOR TWO OR FOUR TIRE?
“Well Rodney (Childers, crew chief) he has a lot of information up there and there were so many cars on the lead lap that you just didn’t want to get buried in there. Because if you get buried in the middle of the field and you don’t get a good restart you are just going to have a tough time making up ground. We won the championship because of a pit call and didn’t win a race today. I don’t think it was because of a pit call, just dumb luck and how many time we had to restart. All-in-all just really proud of everybody."

TELL US ABOUT THAT LAST RESTART:
“It was a fantastic day. The Haas Automation Chevy was fast. Thanks to Monster Energy, Mobil 1, State Water Heaters, all our great sponsors. It was a solid day. I don’t know what we could have done different. We just got pinned in by the yellows and the sequence at the end on which tires we needed to have to optimize how many laps were left. We had two tires; (Brad) Keselowski had four. We didn’t need that extra yellow at the end and I just got out muscled by Keselowski."

WHERE DID THE RACE GET AWAY FROM YOU?
“We had a great Haas Automation Chevy all day. It was fantastic to drive and the way that everybody chipped in on building the car, the pit sequence we just got hung out on the yellows at the end. When do you pit to put four tires on, when do you pit to put two tires on? That last restart I just didn’t get the job done. Brad (Keselowski) out muscled us with four tires."

“Oh, it was fun. I really like this track. It’s all worn out and has a lot of grip and then it falls off in a hurry. It was a lot of fun."

HOW IMPORTANT WAS THE OUTSIDE LANE ON RESTARTS?
“I was lucky I started on the outside I think every time except like two. We qualified 11th, which is pretty good for us, but we weren’t very happy with it after final practice. So, all the guys put their heads together last night and made a lot of changes overnight and got it definitely better. I had actually a good restart on the bottom the one time I did start down there, but the outside was definitely the place to be."

DESCRIBE THE ADJUSTMENTS YOU HAD TO MAKE THROUGHOUT THE RACE:
“We changed it every time. Every time we came down pit road we tried to get it a little bit better. Ninety percent of the adjustments were for the better and a couple of them were not. You live and learn, but overall a team effort. Really proud of my guys, they busted their tails this weekend and got a good finish to show for it."

ON HIS RACE:
“It’s a fun track. It is worn out obviously, slipping and sliding, but it’s got a lot of grip on new tires and then it goes away. Justin (Alexander, crew chief) and James (Small, engineer) and all the guys made some good adjustments last night and then again today throughout the race to try and chase that. The car changes so much from the beginning of a run to the end. We were actually pretty decent on restarts and then it would kind of go away and then come back towards the end of a run. An overall good day for the FVP/Menards Chevy."

ON A TOP-FIVE FINISH:

“Yeah, we’re learning. We haven’t had any bad runs, but we haven’t been running the way we wanted to, but this goes a long ways toward to building to be better throughout the year. It was a team effort. We did a lot of thinking and a lot of adjusting last night and this morning and definitely made some good gains. We made quite a few adjustments during the race. Most of them were for the better. Some weren’t. But, we learned some stuff, that’s for sure."

ON HIS RACE:
“Luke (Lambert, crew chief) did an awesome job and everybody, the guys especially in the pits. A hard fought day today, we did not have the Caterpillar Chevrolet that we need to and thought we were going to have. But good strategy there at the end, got a couple of breaks with a couple of restarts there. Just didn’t get a good restart on the second one to go. (Brad) Keselowski started on the outside of me and he got the line that moved and I didn’t. We were fifth and he was first. Good day for us overall."

THIS TEAM HITTING ON ALL CYLINDERS RIGHT NOW:
“Yeah, we struggled for most of the day, don’t get me wrong, but Luke (Lambert) did a good job with the strategy call for four tires there at the end. We got a couple of breaks there obviously with the caution but the guys in the pits did an amazing job. ECR did a good job, just a good day for us to rebound. When your best running position is the last lap I guess you can’t be too upset."

“Greg (Ives, crew chief) did a great job on adjustments. I had a blast racing out there. Those green-white-checkered restarts at the end were cautions really at then, hurt us. We had a third place finish lined up there. Damned debris falling out there on the track; I don’t know where it come from. All these things show up when I don’t want them to."

WHAT WERE THE RESTARTS LIKE WHEN YOU WERE TRYING TO GET YOUR POSITION ON THE TRACK AT THE END?

"We were way off after Saturday's final practice but came out today and did what we needed to do. I am proud of the guys for going to work last night and not being afraid to take a big swing at the setup. To go out there and run with a completely different setup than we had Friday and Saturday and come away with an eighth-place finish really says something about this team. We never give up and believe in each other. As mad as I was with the pit crew today I still feel they are good and we'll get it right. On that last restart I wasn't in the best spot and lost some ground (fifth to eighth). On the previous restart I was able to make a good gain in track position (ninth to fifth). It's been a great start for our Furniture Row team with five straight top 10s. We just need to keep it going and try to improve each week."

“We had a good Lowes ProServices Chevy today. Had some handling issues and worked on it all day. We got buried in the end with pit strategy so it wasn't the outcome we were looking for. Looking forward to Martinsville."

ON TAKING TWO TIRES:
“Well, we just had to do the opposite of what everybody else did. It wasn’t the best case scenario for us, but we had to recover from that, so we had to take a chance."

IT SOUNDED LIKE HE PULLED ACROSS YOUR CAR AND MADE A HOLE IN YOUR NOSE?
“Yeah, there is a big hole underneath all of that. It just so happens that the right rear of his car is all tore to hell. He had a problem with the No. 43 car and when he got done drafting with him he drive across the race track into us. It’s just stupid."

BEST FINISH OF THE YEAR FOR YOU:
“Yeah I mean I’m happy, we are gaining on it. We were getting to where we were sniffing the edge of the top 10 anyway all day. We are gaining on it a little chunk at a time. We didn’t need to get it all today, but this is a big gain for us."

THE NO. 41 AND NO. 4 STRONG ALL DAY IN THE FRONT:
“That was good to see. I’m disappointed they couldn’t finish it off, but I’m glad to see them run up there all day."

YOU ARE FINE WITH HIM RIGHT?
“Yeah, I don’t have a problem with it I just didn’t want my car tore up. He had a problem with somebody else and I’m the one who paid the price for it. I got a hole knocked in it and it takes us out of contention to have a top 10 finish. Like I said I wasn’t delusional that we were going to win the race or anything, but if he has a problem with somebody else and he has his hand out the window changing three lanes. Then drives back across and punches a hole in my nose, he is like ‘well you could have lifted’. We are in the middle of the backstretch, why is it my responsibility to lift because he is arguing with somebody else? It’s just stupid. Same stuff we always deal with kids."