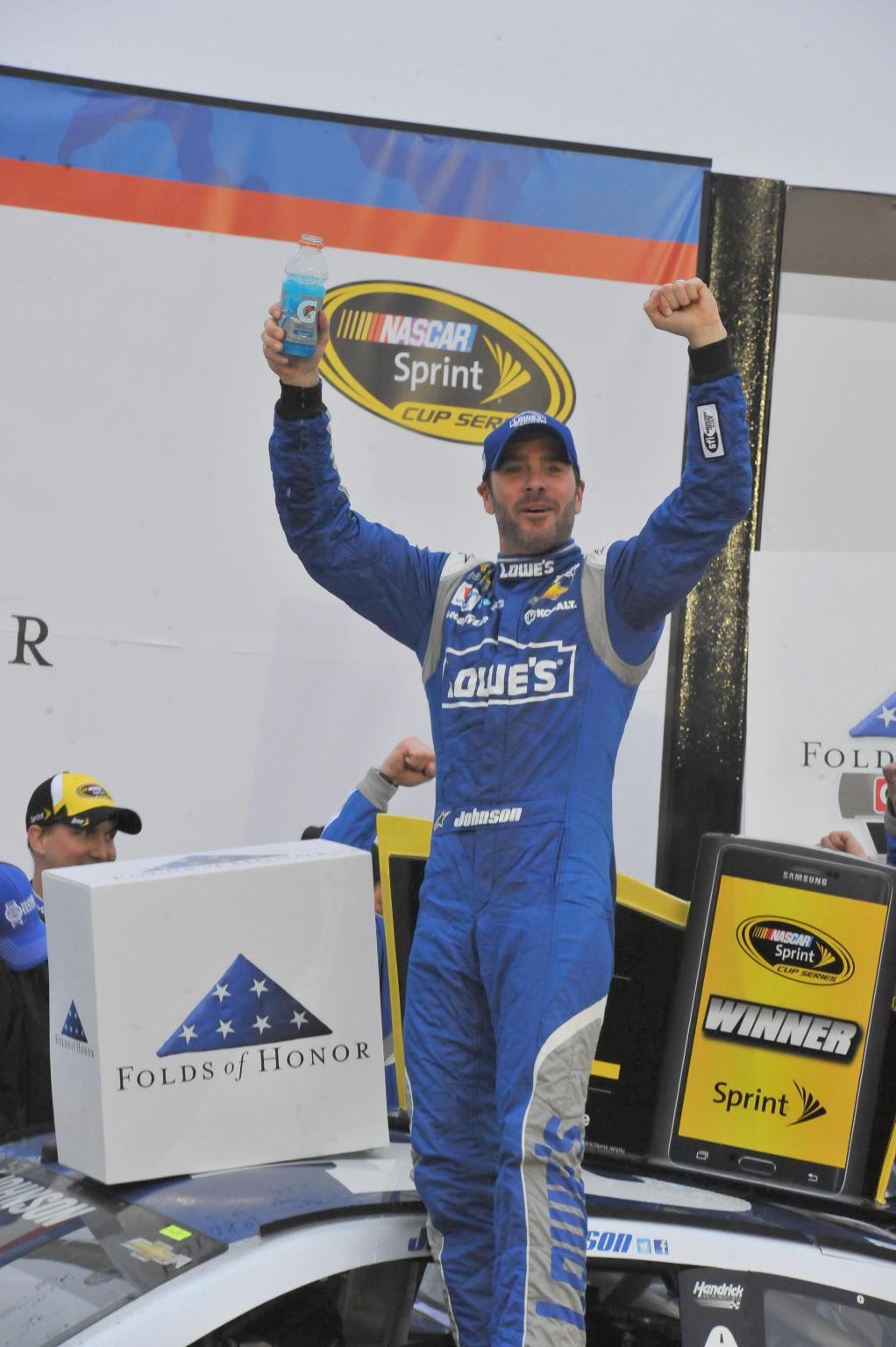 Johnson held off his Hendrick Motorsports teammate Dale Earnhardt, Jr. on a final restart with 14 laps to go and then bested Kevin Harvick by nearly two seconds to collect his 71st-career NASCAR Sprint Cup victory

Johnson's victory his fourth Sprint Cup win at Atlanta and his first here since 2007.

"This thing was just bad fast," said Johnson. "I had a blast racing with the No. 4 (Kevin Harvick). He was awfully strong today. I think track position there at the end just kind of set things in place. We had the restart we needed to and cleared the No. 88 (Dale Earnhardt Jr.) and off we went."

Johnson was among nine drivers who did not get to qualify on Friday after failing pre-qualifying inspection, putting them in the rear of the field for Sunday's race.

"I knew within about two sets of corners when the race started we were going to have an awesome day. The car was just incredible," said Johnson. "I think where the race really opened up for us was once I was able to get in front of the 19 car (Edwards). I felt like if I got clean air, I was going to be in good shape.

Starting under wet and cold conditions that delayed the start by nearly an hour, polesitter Joey Logano led 83 of the opening 86 laps.

Harvick, who qualified on the outside pole, was forced to start in the rear after losing an engine in the final practice session, also raced his way back into the top 10 by lap 40 and managed to overtake Logano on lap 87 to complete the run from worst to first.

Johnson flexed his muscle and led for the first time after passing Harvick for the lead on lap 198.

The first major incident of the day broke out on lap 258, when Denny Hamlin broke loose and collected Ryan Newman and Jamie McMurray, who then came up the track and clipped Jeff Gordon, who slid down to the inside of turn three and hit a part of the wall not covered by a SAFER barrier.

In his final start at the track he began his career at back in 1992, Gordon's day ended much like his day in last week's season-opening Daytona 500 – with a wrecked race car.

Gordon emerged unhurt, but in disbelief about the lack of a SAFER barriers at the track.

"I am very frustrated with the fact there are no SAFER barriers down there," said Gordon. "I knew it was a hard hit. Then I got out and I looked and I saw ‘oh wow big surprise I found the one wall here on the back straightaway that doesn't have a SAFER barrier.'

"Everybody knows we have to do something and it should have been done a long time ago. All we can do now is hope they do it as fast as they possibly can."

Another late caution flag with 25 laps to go brought Johnson and the rest of the leaders to pit road but Kenseth elected to stay out along with Clint Bowyer and Brett Moffitt.

Back under green, Johnson quickly motored to the front behind Kenseth and dived underneath the no. 20 Toyota in turn two to re-take the lead.

On the restart, Johnson pulled up into the middle groove while Earnhardt, Jr. looked to the outside with Harvick, Kenseth and Truex stacked up behind them.

Earnhardt, Jr. briefly pulled past his teammate by Johnson powered past and back into the lead, opening up a full-second advantage.

Harvick slipped past Earnhardt for second with six laps to go, but had no chance of catching Johnson who had already opened up a half-straight lead.

Harvick, who led a race-high 116 laps at the track where he collected his first-career Sprint Cup victory back in 2001, earned his second-straight top two finish after finishing runner-up in the season opening Daytona 500.

"I had one bad restart on the outside where I spun the tires, fell back to fifth or sixth, never quite recovered that, then got stuck behind the 55 when they stayed out on tires. Just never made those spots up," said Harvick. "All in all, still a solid day."