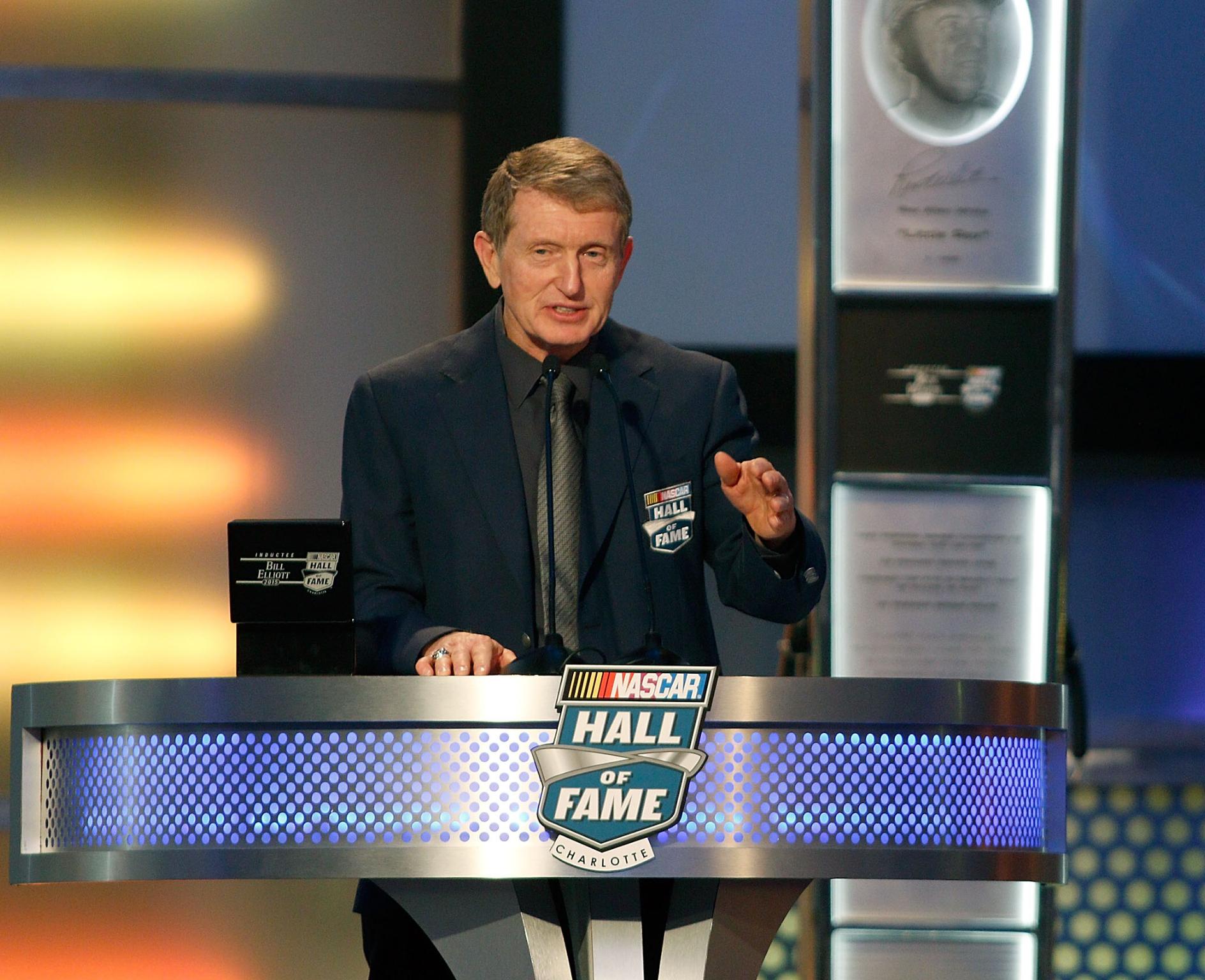 The NASCAR Hall Of Fame inducted their newest class of legendary drivers as the Class of 2015 were honored during a ceremony on Friday night at the Charlotte Convention Center.

Among the inductees were NASCAR champions Bill Elliott, Rex White and the late Joe Weatherly, and drivers Fred Lorenzen and the late Wendell Scott.

A 16-time winner of NASCAR'S "Most Popular Driver Award", 1988 Sprint Cup Champion Bill Elliott was elected into the Hall of Fame in his first year as the finalist.

Known as "Awesome Bill from Dawsonville", Elliott would go on to collect 44 wins over a 37-year career including two Daytona 500's and three Southern 500's. In 1985, Elliott became the first driver to win the coveted "Winston Million" for winning three of out of four of the sport's most hallowed races during the 1985 season.

Elliott would later go on to start his own race team and later helped spearhead Dodge's return to NASCAR in 2000. He retired from full-time competition in 2003 and was replaced by then-rookie Kasey Kahne, who inducted Elliott Friday night.

"One thing I look at out here today is one common bond with all these racers, it's the hard work and the dedication all these guys had," Elliott said. "It's just an honor to be here. I mean, if you look on the walls here at the people that are already inducted into this great Hall of Fame, it's just incredible."

Former driver Fred Lorenzen was one of the sports earliest superstars, and one of the few who didn't have Southern roots.

A native of Elmhurst, Illinois, Lorenzen started out as a mechanic for the Holman-Moody race team in 1960 as was driving for the team a year later. Although he never competed in a full season, Lorenzen still managed to rack up 26 wins in 158 starts and finished as high as third in the standings in 1963 before retiring in 1967.

"Dad always said the sky is the limit, and don't let anyone tell you otherwise," said Lorenzen's son, Chris. "That has been Dad's most important saying in life, and he's certainly lived by it. Thank you, Dad, for all that you have given to NASCAR. Thank you for the memories, joy and inspiration you've given to so many people."

A Danville, Va. Native who started turning wrenches as a mechanic in World War II, Scott began racing in 1947 and started his first NASCAR race in 1961. In 1963, Scott would score his only career victory in a 100-mile feature race at Speedway Park in Jacksonville, Fla., beating out luminary drivers Buck Baker, Richard Petty and Ned Jarrett.

Although he never won another race, Scott helped inspire thousands of young drivers with his perseverance and determination.

"The legacy of Wendell Scott depicts him as one the great vanguards of the sport of NASCAR racing," said Scott's son, Franklin. "Daddy was a man of great honor. He didn't let his circumstances define who he was.

"In spite of the many obstacles, struggles and many hardships he faced, he persevered, and what seemed to be insurmountable odds to others, Daddy considered an opportunity. His intestinal fortitude has placed him among the greatest to ever compete in the sport he loved, racing."

Two –time champion Joe Weatherly was known as mush for his personality as for his accomplishments on the track, a reputation that earned him the nickname "The Clown Prince of Stock Car Racing."

Weatherly competed in all manners of auto racing, including motorcycles, modifieds and even in NASCAR's short-lived Convertible division, where he won 12 races.

In 1962 Weatherly won the first of his two back-to-back championships. Tragically, Weatherly would lose his life in a crash at Riverside (Calif.) Int'l Raceway on January 19, 1964 at the age of 41.

Weatherly was accepted into the Hall of Fame by his niece, Joy Barbee.

"Uncle Joe died doing what he loved," said Barbee. "He always had a big smile on his face, and he was just such a character to be around, and definitely lived up to the title given to him as the Clown Prince of Racing.

1960 Sprint Cup champion Rex White was a short-track specialist from Spartanburg, SC who built his reputation as a hard and consistent racer on the track. In 233 starts in his nine-year career, he finished in the top five 110 times, collecting 28 victories – all but two of those coming on tracks less than a mile in length.

"Words can't express how honored I am to be inducted into the NASCAR Hall of Fame along with the other Hall of Fame members, especially the 2015 fellow inductees," said White. "No driver wins a championship by himself. Nobody enters the Hall of Fame alone. I am a symbol of a team effort, my first race in 1953 until now. This effort spans 62 years.

"I beat some good drivers in my career. In order to eat and pay your bills, you've got to take in money, and if you're short in a race car with your funds and doing the work yourself, you don't race until the end of the race when you get the money. That's the checkered flag. To finish first, first you must finish."