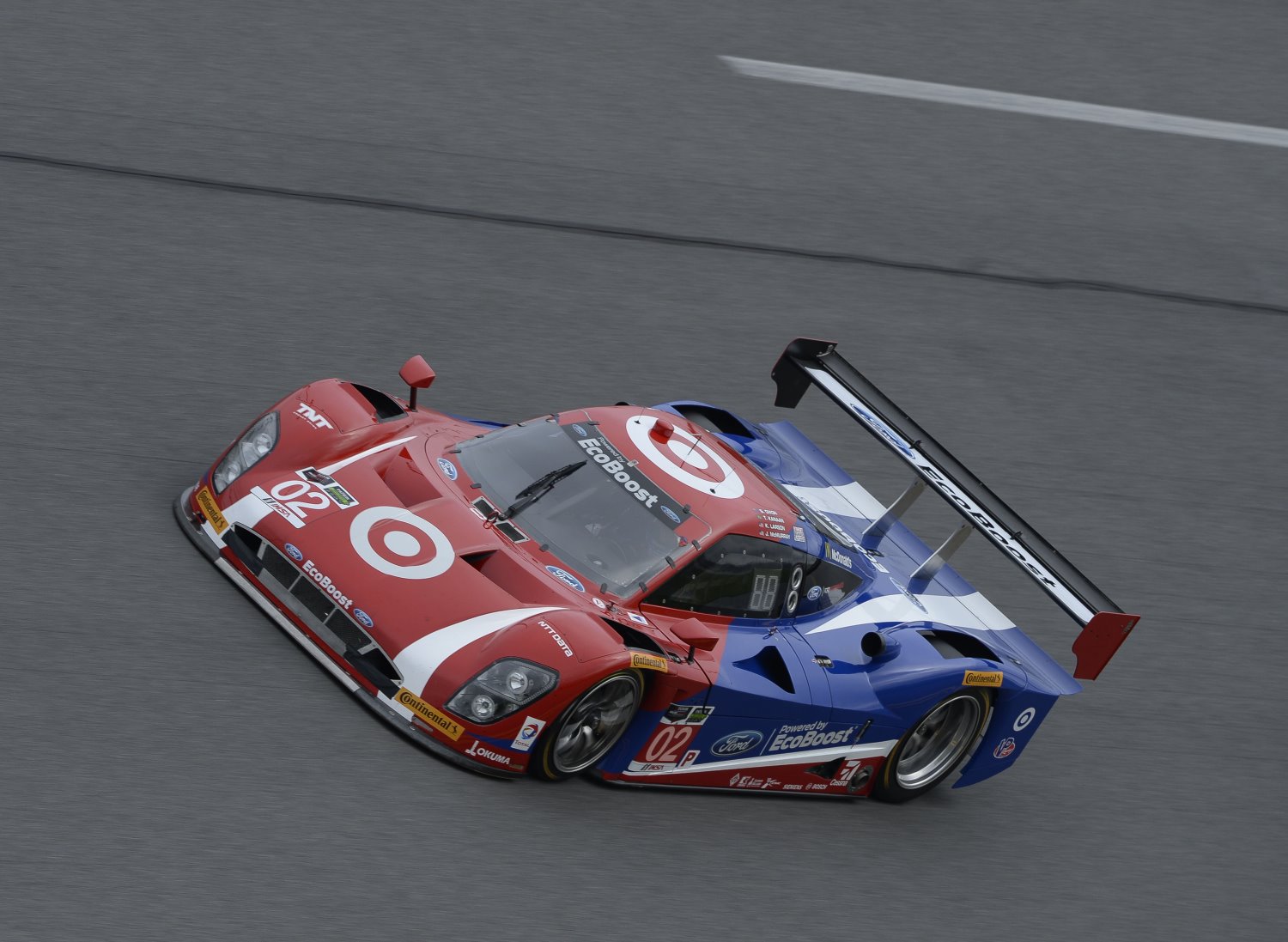 The annual kick off to the international motorsports calendar, the Rolex 24 At Daytona is one of the premier racing events in the world. With 53 cars from 10 different automotive manufacturers, and lineups comprised of star drivers from NASCAR, IndyCar and Formula One joining the best of the best from international sports car competition, this year's 53rd running of the Rolex 24 on Jan. 24-25 is a can't-miss event. In fact, the Daytona International Speedway infield is expected to be bursting at the seams as fans gather to watch the season-opening event for the TUDOR United SportsCar Championship and the Tequila Patron North American Endurance Cup.

In addition to exciting on-track action, the Rolex 24 offers a wide variety of experiences from autograph sessions to carnival rides and live entertainment. Tickets are still available for both the infield and grandstands, including 40,000 new seats as part of the DAYTONA Rising project. Those seats located on the west end of the frontstretch will be open for the first time to fans on three different concourse levels.

"You see the pit entry and exit, you see the action, you see the first corner," said Rolex 24 Grand Marshal Jochen Mass. "It's quite spectacular. You can see the cars coming back onto the track banking. I would definitely sit up here."

FOX Network To Lead More Than 15 Hours Of Live Coverage

The FOX network will be a part of the television coverage for the third consecutive TUDOR United SportsCar Championship event, leading more than 15 hours of live coverage of the Rolex 24 At Daytona on Jan. 24-25.

The FOX telecast begins at 2 p.m. ET on Saturday, Jan. 24, moments before the green flag waves for the first round of the 2015 TUDOR Championship and the Tequila Patron North American Endurance Cup. It is the second consecutive year that the Rolex 24 telecast has opened on the broadcast channel, which is widely distributed in approximately 115 million homes in the United States.

The inaugural season of the TUDOR Championship in 2014 closed with back-to-back FOX telecasts of events at Circuit of The Americas and Road Atlanta around the network's NFL programming. Each telecast averaged more than one million viewers, with peak audiences in excess of two million, which were notable high points in viewership.

The Tequila Patron North American Endurance Cup is a 52-hour endurance competition that encompasses the four marquee endurance races on the TUDOR United SportsCar Championship schedule: the Rolex 24 At Daytona, Mobil 1 Twelve Hours of Sebring Fueled by Fresh From Florida, Sahlen's Six Hours of The Glen and the Petit Le Mans powered by Mazda.

With points awarded at specific intervals throughout each race, the Rolex 24 takes on added importance as the race with the most segments. The leader at the end of each segment scores five points, four points are awarded for second, three points for third and fourth-place on back receives two points. Points will be scored in the Rolex 24 at the six, 12 and 18 hour marks, and the finish.

The No. 912 Porsche North America team won the Patron Endurance Cup in GTLM after finishing ninth in the Rolex 24, while it was the team's No. 911 Porsche 911 RSR that won the Rolex 24.

While all four Patron Endurance Cup races stand together as the most iconic endurance races in North America, to win the four-race competition it almost certainly will require a fast start and solid finish in maybe the biggest of them all – the Rolex 24.

Considered by many as the best GT racing in the world, the TUDOR United SportsCar Championship's GTLM and GTD classes likely will need the entire 24 hours of the Rolex 24 At Daytona to decide the respective class winners.

Last year's Rolex 24 – the inaugural event for the TUDOR Championship – came down to the wire in both classes. The No. 911 Porsche North America Porsche 911 RSR beat the No. 55 BMW Z4 GTE of BMW Team RLL by a mere 2.838 seconds in GTLM, while a last-lap battle in GTD between the No. 555 AIM Autosport Ferrari 458 and No. 45 Flying Lizard Audi R8 was decided by 1.293 seconds. Both battles were set up by a late-race yellow flag and 10-minute sprint to the checkered flag.

While it may be tough to follow-up two of the closest class finishes in Rolex 24 history, last week's Roar Before the Rolex 24 test session provided a glimpse at just how close both classes are again in 2015.

Goossens, who started from the pole in GTLM at the Rolex 24 in 2014 expects another tight battle in 2015, this time in the GTD class.

"There are a lot of good drivers out there and a lot of people working hard right now to come back here and get the pole," he said. "Hopefully we have something for them, but most importantly we need to be there at the end of the race and try to get that watch."

Ten GTLM cars and 19 GTD cars are entered in the Rolex 24. Among those is the defending GTD champion No. 97 Turner Motorsport BMW Z4 which announced its return to the TUDOR Championship two weeks ago and arrived in Daytona in time for the final day of Roar Before the Rolex 24 testing.

Buoyed by the success of its STEM program in 2014, Mazda will expand its "Racing Accelerates Creative Education (R.A.C.E.) program in 2015.

For the season-opening Rolex 24 At Daytona, Mazda drivers and engineers will visit two high schools in the Daytona Beach area with STEM (science, technology, engineering and math) programs. Due to the high demand, there will be two programs at each location to reach the greatest number of students.

Mazda will visit Mainland High School in Daytona Beach – within walking distance of the Speedway – on Tuesday and will then return to DeLand High School on Wednesday, the site of the first STEM program in 2014.

"I love doing this, and I'm looking forward to doing this before each race this season," said Mazda driver Joel Miller, who received his engineering degree from the University of California, Riverside. "I specifically talk on the technology and engineering part, on how it references our Mazda Prototype race car. It's a great way to give back something to the community."

"This STEM program has been one of the most rewarding things we've done at Mazda Motorsports," enthused John Doonan, Director, Mazda Motorsports and driving force behind Mazda's R.A.C.E. STEM initiative. "We're happy to report that our future is in good hands as the students that we've been fortunate enough to interact with are demonstrating the drive, initiative and curiosity that it takes to convert STEM education into global innovation."

The Mazda SKYACTIV-D Diesel Prototype show car will be on hand both demonstrations, similar to the Mazda/Castrol Edge/ModSpace Prototype that Miller will co-drive in Saturday's Rolex 24. Both of the SpeedSource team cars will carry decals for each of the two high schools on the rear wing, a practice the team will continue throughout the season.

Jordan Taylor Quickest In Roar Before The Rolex 24 Testing

Jordan Taylor ran the fastest lap during the recent Roar Before the Rolex 24, going 1:39.181 (129.218 mph) in Wayne Taylor Racing's No. 10 Konica Minolta Corvette DP shared by his brother Ricky Taylor and Max Angelelli to lead the Prototype (P) class.

Ã‚Â· Two Prototypes that sustained damage during incidents at the Roar are expected to be back in action for the Rolex 24. Memo Rojas was involved in an accident in the No. 0 Claro / TracFone DeltaWing DWC13, while Byron DeFoor flipped in the No. 50 Fifty Plus Racing Endures for a Cure Dinan/Riley. Both drivers escaped injury.

A number of leading Continental Tire SportsCar Challenge Grand Sport (GS) teams have shuffled their lineups in preparation for Friday's BMW Performance 200 at Daytona International Speedway, the opening round of the 2015 campaign.

Defending GS champion Trent Hindman will have a new co-driver in the No. 46 Fall-Line Motorsports BMW M3, defending Daytona winner Ashley Freiberg, who will join him for the full season.

Freiberg ran in five races in 2014, becoming the first woman to win overall in the series when she co-drove with Shelby Blackstock in the Daytona victory. The 23-year-old native of Homer Glen, Illinois became the first woman to win overall in North American Porsche GT3 Cup Challenge competition in 2013. Indianapolis Street Tuner (ST) winner Corey Lewis will join Al Carter in the team's No. 48 BMW M3.

Multimatic Motorsports shuffled its lineup, with Billy Johnson moving to the No. 15 Ford Mustang Boss 302R to join Scott Maxwell, giving the team a pair of two-time Daytona winners. Johnson set an unofficial GS record in recent Roar Before the Rolex 24 testing, running 1:55.794 (110.679 mph). That eclipsed the mark set by Multimatic driver Jade Buford, who moves to join Ian James and newcomer Austin Cindric in the team's No. 158 Mustang. Buford became the first repeat pole winner in the series last year.

Justin Piscitell will be called on to step up to co-drive the championship-winning No. 56 Murillo Racing/Mosing Motorcars Porsche Cayman in the season opening BMW Performance 200 alongside defending Street Tuner (ST) champion Eric Foss. Jeff Mosing, who scored both his first TOTAL Pole Award and ST victory at Daytona in 2014, is expected to miss the event as his wife Nina is due to give birth at that time. Last year, Mosing missed sharing the ST title when he suffered painful back spasms on the eve of the race at Mazda Raceway Laguna Seca. In addition to winning Daytona, he and Foss also won at VIRginia International Raceway, among six podium finishes.

Greg Liefooghe has been close several times, but has yet to reach the top step of the podium at Daytona. The San Francisco resident finished on the podium the past four years, placing third in 2011 and 2012 and then second in 2013 and 2014. Liefooghe switches uniforms for 2015, moving from BimmerWorld to the No. 83 Next Level European Porsche Cayman he shares with Eric Zimmermann. Only the car and colors have changed, though, as Next Level European shares paddock space with BimmerWorld, its sister team.

Prior to winning a pair of Rolex Series GT championships, Jeff Segal was a regular in the Continental Tire Challenge, winning the 2007 GS title with Jep Thornton for Automatic Racing. The Philadelphia native returns to the series in 2015, joining Wayne Nonnamaker in the No. 42 Team Sahlen Porsche Cayman. He finished fifth in GS for Rum Bum Racing in 2012 in his most recent appearance.