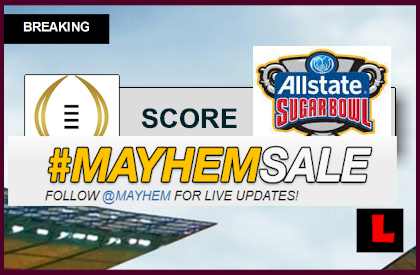 It happened last week. Alabama vs. Ohio State in the Allstate Sugar Bowl. In my mind, this game will go down as one of the epics, one of the transformational games of the past several years. And I'm not talking about the Ohio State upset.

Many may not have noticed, and those that did, may not have understood the significance of what transpired during the game. But if we're looking for creative ways to benefit from a commercial sponsorship, look no further. For those keeping score, my impression is on this example, college football smoked motor racing in the victory. As the traditional leader in the sport marketing industry, motor racing must not find itself competing with an aging and tired roster of marketing benefits.

First, a description of what the promotion was about. For those of you who didn't watch the game, Allstate is the title sponsor of the Sugar Bowl, so the game's relationship with the sponsor is crucial to both parties. In addition to a number of other promotional elements that were part of their involvement, Allstate developed what they called the "Mayhem sale" with a number of commercials broadcast during the game.

The "Mayhem Sale" apparently re-introduced the "Mayhem" character to Allstate advertising. For this advertising campaign, "Mr. Mayhem" informed the TV audience that a young couple had used social media to announce that they were leaving for the weekend to attend the Sugar Bowl game in New Orleans, something that they were excited to let their social media friends know about.

Mayhem showed a photo lifted from their social media page of the unfortunate couple smiling happily from the stands of the Sugar Bowl. Unfortunately for them, Mr. Mayhem was also using social media to discover that this young couple was otherwise engaged at the bowl game, and took this opportunity to go to their house and "steal" their fictional stuff.

With that scenario, Mr. Mayhem went on to announce that he was going to sell their stuff on line, and that the viewer could purchase these goods at ridiculously low prices at a special website established just for the occasion. www.mayhemsale.com was flashed on the screen to encourage viewers to visit the website and purchase these "stolen" home goods. That is the fictional background that the Allstate promotion was built upon.

Turns out, there really was a www.mayhemsale.com and it went live during the bowl game. And Allstate really did sell some merchandise at ridiculously low prices, including the couple's fictional (what appears to be) Chevy Volt for $200.00. And a flat screen TV for $26.00.

And a refrigerator, tool box, lamps, furniture, lawn mower, odds and ends and a plethora of items you might expect from a garage sale. The sale was on. For those viewers who picked up on the promotion and checked out the website, they were informed that this was indeed a legitimate sale and these items were available to the first bidder to complete the sale process.

This promotion checked all the right boxes in advancing the modern strategies of consumer engagement and enhanced interaction between sponsor, the event and the audience.

1. Relevancy. Allstate is in the insurance business. The topic of use of social media as announcements to publicize what and where individuals are going and doing is common place. The idea that this information might become available to people with criminal intentions is obviously a topic that directly relates to the insurance business.
2. Context. Allstate as a sponsor was presented to the viewers in context with its core business. It's not an unrelated "exposure" of Allstate or an attempt to create a link between football and insurance. In other words, the subject of the promotion helps to further the objectives of the sponsor company.
3. Fun. A fun engagement helps to make this more memorable. The entire promotion was presented in an inspired way which made responding to it a welcome choice for many viewers. The chance of getting some nice items for a deal price never hurts either.
4. Allstate subsequently announced that the Mayhem sale was part of an overall corporate focus entitled "Project Share Aware." According to Allstate, Project Share Aware educates people about sharing safely on social media and the Mayhem Sale was used to illustrate it.

[adinserter name="GOOGLE AD"]This particular promotion is not without its critics who say that Allstate was creating a fear based campaign to help sell their services. In addition, some people who tried to purchase merchandise apparently found frustration with their ability to actually succeed in purchasing them.

However, I'm not here to judge Allstate's underlying marketing philosophy or Allstate's execution of select elements of it as it is irrelevant to the point of this article. What I am here to say is that the strategy itself, the skilful combination and cohesive approach of this campaign, combining sponsorship, social media, relevant messaging and engaging participation was nothing short of genius.

One final note – the Mayhem Sale apparently crashed the website twice from an overload of traffic and achieved a reported 20 million Facebook impressions in less than one day. It's stark evidence that the Mayhem Sale is of real marketing significance.

I would argue there should be much less talk about how many people are watching a motor race as a principal means of justifying motorsport sponsorship, and much more focus on the number of people who are engaged in it via a sponsor relevant, fan friendly promotion. Seize that initiative as my and our collective goal and motor racing as an event marketing showcase will set in motion a mayhem all its own.