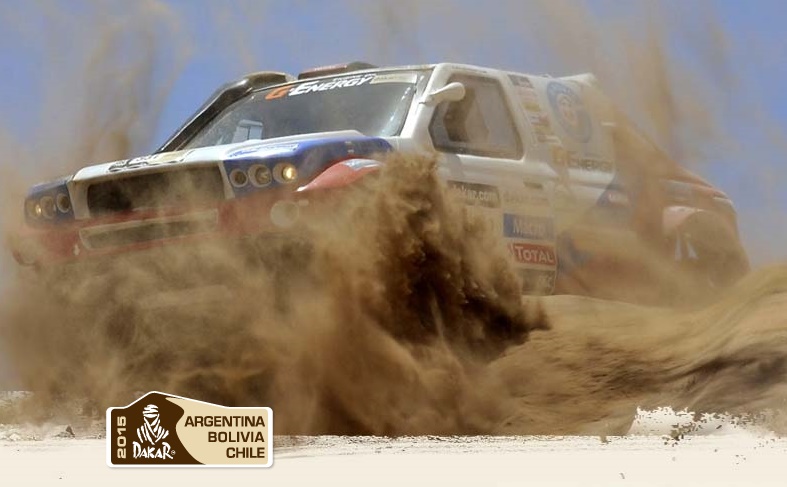 Administrative and technical scrutineering were completed in Tecnopolis this afternoon. A total of 406 vehicles (161 motorcycles, 45 quads, 137 cars and 63 trucks) have been cleared to start the 37th edition of the Dakar Rally. A fearsome battle for the four titles at stake looms, especially in the two queen categories, cars and motorcycles, in which the favorites have largely kept their powder dry.

All of them, without a shadow of a doubt, gentlemen. Throughout two days and a morning of administrative and technical checks under the sun or the sometimes heavy rains falling on the Tecnopolis centre in Buenos Aires, the big constructors, their retinue of staff and, of course, their star riders and drivers sought to play down the huge event which starts tomorrow and will take them on a 9,300 km quest on the tracks, sand and rocks of Argentina, Chile and Bolivia.

Peugeot, which is fielding three DKRs 2008 driven by Stephane Peterhansel, Carlos Sainz and Cyril Despres, a five-time motorcycle champion making his debut in the car category, bared its teeth, but only a little. "Mister Dakar" Peterhansel hailed a new era, whereas "El Matador" Sainz, a dyed-in-the-wool perfectionist, talked of a test edition.

Mini is also flying under the radar with its eleven-strong formation, including a buggy driven by comeback kid Chicherit. While leader Nani Roma quietly pointed out that "The year just flew by! It feels like Valparaiso was yesterday… ", it was his humility that really shone through.

"We're starting from scratch", he explained this morning, as teammate Nasser Al-Attiyah got ready to wipe the slate clean. However, there is much more to the car category than the clash of these two titans. Behind their eagerly awaited duel, the prudent, talented Giniel De Villers hopes to make good on the promise he showed in his Toyota last year, while Gache's three buggies will be worth keeping an eye on.

The car category looks increasingly like a gallery of evolution. Buggies are increasing their presence, as shown by the return of the prodigal son Guerlain Chicherit, invited by Sven Quandt himself. "My mission's to go further than the Peugeots", he explained. The buggies' battle for dominance is on. And it will be fearsome.

Marc Coma and his retinue are also making the most of the calm before the storm. The four-time winner in the motorcycle category is the visible face of a well-oiled machine. Although he has taken a leaf out of the other favorites' book in adopting a humble stance, he is obviously the man to beat. He will be shadowed by the consistent Viladoms and the promising Sunderland. KTM's three-pronged assault seems unbeatable on paper and, probably, on the track.

"We've trained well. I also trained at altitude back home in Spain", was the Catalan's curt explanation. In the same line, Joan Barreda and his HRC teammates (Rodrigues, Goncalves, Israel and Sanz) appeared unfazed during the scrutineering:

"We came early to Buenos Aires to acclimatize to the country. We're ready", said the most prolific stage winner of the last edition (five stages, only good enough for seventh overall). In this phony war, the pressure lies squarely on Honda's shoulders. For them, it seems to be now or never.

This happy crowd will get to play gentlemen for one last sunny afternoon in front of the Casa Rosada, the executive mansion of the President of Argentina. The start podium and the sparkling parade will put on a great show for fans in Buenos Aires. Competitors will size up one another one last time. The crowds will go wild. But a new chapter starts tomorrow.

"The world cup of adventure", as Etienne Lavigne called it in reference to the 54 nationalities represented during the general briefing earlier this afternoon. The masks are about to fall.