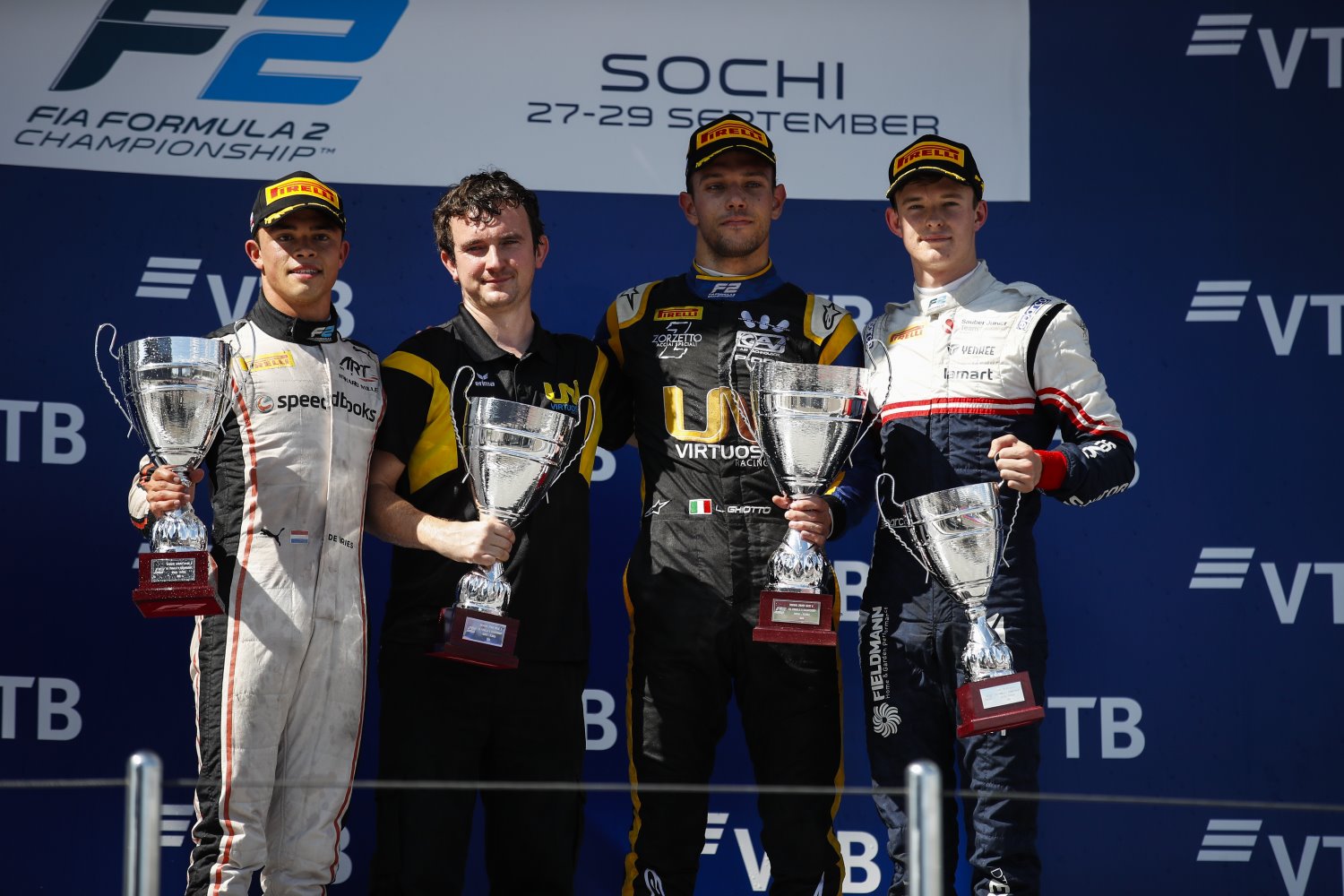 Luca Ghiotto claimed a third victory of 2019, with a defiant defensive display in the Sprint Race, fending off an unrelenting attack from champion Nyck de Vries, who secured a 12th podium of an incredible campaign. The ART Grand Prix ace finished second ahead of Sauber Junior Team by Charouz’s Callum Ilott.

The race was interrupted by a collision between Nikita Mazepin and Nobuharu Matsushita. It has since been confirmed that both drivers are fine.

Mazepin had started on reverse grid pole and got off the line smoothly, much to the delight of his home crowd in Sochi. The Russian had brushed off an initial attack from Jack Aitken, before the duo were forced off track and onto the tarmac.

The Brit from Campos attempted to return to the track safely, around the signposts, but was cut up by Mazepin, who subsequently clipped Aitken’s tires. This flung the Russian into the path of Matsushita and the duo collided, slamming into the wall. The collision brought out a red flag and the race was subsequently shortened to 15 laps due to time constraints.

When action got back underway, it was Ghiotto out in front, ahead of Ilott and De Vries. The Italian raced away unopposed, but the Briton wasn’t as lucky, as he was unable to defend from the power of De Vries’ ART machine, who darted down the left of him on the pit straight. Ilott attempted to put up a fight, keeping pace with the Champion until the end of the third corner, when De Vries finally made the move stick.

Taking advantage of their battle, Ghiotto stretched his lead to 2.6s, before easing off on his degrading Pirelli rubber. De Vries quickly cut into this and got back to within DRS range, forcing the Italian on to the defensive.

Little changed in the order behind them. Guanyu Zhou managed to nab fifth from Sergio Sette Samara, while Giuliano Alesi squeezed himself into the points, at the expense of Artem Markelov.

De Vries was dogged in his pursuit of Ghiotto out in the front, but the Italian continued to fend him off, despite the DRS advantage. The Italian eventually forced himself past the checkered flag in first, ahead of De Vries and Ilott. Latifi and Zhou completed the top five, followed by Sette Samara, Sean Gelael and Alesi.

De Vries ends his Championship winning weekend with 266 points, ahead of Latifi on 194. Thanks to his third win of the season, Ghiotto has sliced the gap between them down to just 10 points, ahead of Sette Samara on 165. Aitken completes the top five on 159 points.

The fight for the Teams’ Championship continues, as DAMS remain top on 359 points, ahead of UNI-Virtuosi on 206. ART Grand Prix are third with 276, Carlin fourth on 200 and Campos Racing fifth with 189.

The fight for second will recommence in Yas Marina at the end of November, while DAMS will look to secure the Teams’ Championship.