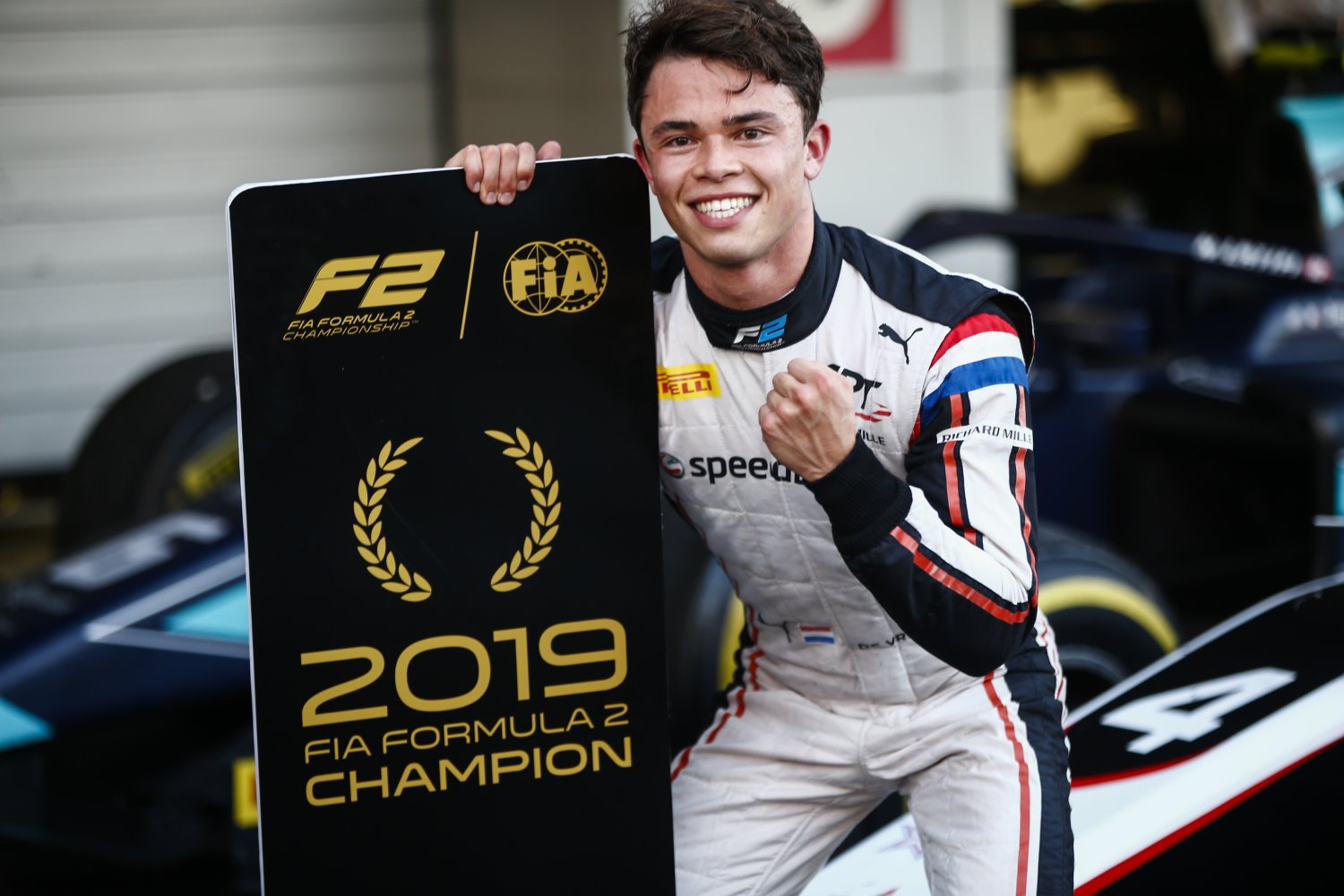 Four wins, 11 Podiums, 254 Points, one Championship title and a season of utter domination. Nyck de Vries sealed the 2019 FIA Formula 2 title in style, with victory in the Sochi Feature Race, ahead of his main challenger, Nicholas Latifi. The Canadian had to settle for second on the day, and now faces a fight for the same spot in the drivers’ standings.

The morning’s rain had dried up by the time De Vries lined up on pole at 4.45pm local time and he got off the line smoothly, surging into the distance ahead of Latifi and Callum Ilott. The duo both held on off the line, but couldn’t match the sheer pace, and determination, of the Champion-to-be. Further back, the front 10 remained largely unaltered, apart from the dazzling red PREMA of Mick Schumacher, who had risen up to seventh thanks to a storming start. The German’s overtaking spree was momentarily halted as Artem Markelov pulled off the track and into retirement, bringing out a virtual safety car.

When racing resumed, Ilott went into free fall. The Briton slowed and plummeted down the order, from third to 12th. This handed Schumacher sixth, which he then turned into fifth with a move on Guanyu Zhou, who was later slapped with a five-second time penalty for leaving the track and gaining an advantage. Out in front, Latifi knew that he would need to pass De Vries to prevent the Dutchman from claiming the title, but his hopes were dashed when Ghiotto lunged down his left hand side for second. The Italian didn’t stop there and daringly sent it down the side of De Vries at the first corner, to complete his charge from fourth to first.

Unlike Ghiotto, De Vries and Latifi had both started on the supersofts and would pit later that lap, returning in 10th and 11th. This sparked into motion the Italian’s alternate strategy, as he set about maintaining the 27s gap that would be required when he eventually pitted. Behind the Italian, Schumacher, Nikita Mazepin and Nobuharu Matsushita had opted for the same strategy.

Schumacher’s attempts at making this work were dealt a blow as the Russian passed him, prompting a momentous roar from his home crowd. The rear of his PREMA was then in the eye-line of Matsushita, who overtook the German when he locked up at Turn 13. De Vries and Latifi had already set about closing what was initially a 32s gap to Ghiotto, as they dashed by Marino Sato, and shortly after, Ralph Boschung. At this point, Schumacher was forced out of the race when his PREMA went up in smoke. The Ferrari F1 junior made it back to the pits, but was forced to retire.

Five laps remained and the gap between De Vries and Ghiotto was now just 26s, but still, the Italian refused to pit. He would devilishly remain out for two further laps, as he looked to make the switch when the front field’s rubber would be at its weakest.

When the UNI-Virtuosi racer eventually swapped his mediums for supersofts, he returned behind both of the Championship’s top two and Dilator. Albeit, with fresher, faster tires. He made light work of the Carlin and began to chase down Latifi. He got within touching distance, but slipped slightly wide and cost himself valuable time. This allowed De Vries to cross the line unopposed and fittingly seal his Championship title with a fourth victory of the year, while Latifi held on for second. Behind them, Dilator managed to sneak back past Ghiotto on the final turn, as the Italian appeared to lock-up. Sergio Sette Camara completed the top five, ahead of Matsushita, Jack Aitken, Mazepin, Ilott and Zhou.

De Vries secured the F2 Championship with an advantage of 70 points over Latifi in second. Ghiotto is third with 169, ahead of Sette Camara on 161 and Aitken on 159. In the Teams’ Championship, DAMS remain in first with 345 points, ahead of UNI-Virtuosi on 285 and ART Grand Prix on 264. Carlin are fourth with 200 and Campos Racing fifth with 189.

De Vries may have been named champion, but there remains everything to play for behind him, with second place still very much up for grabs. Action continues tomorrow at 11.20am local time.