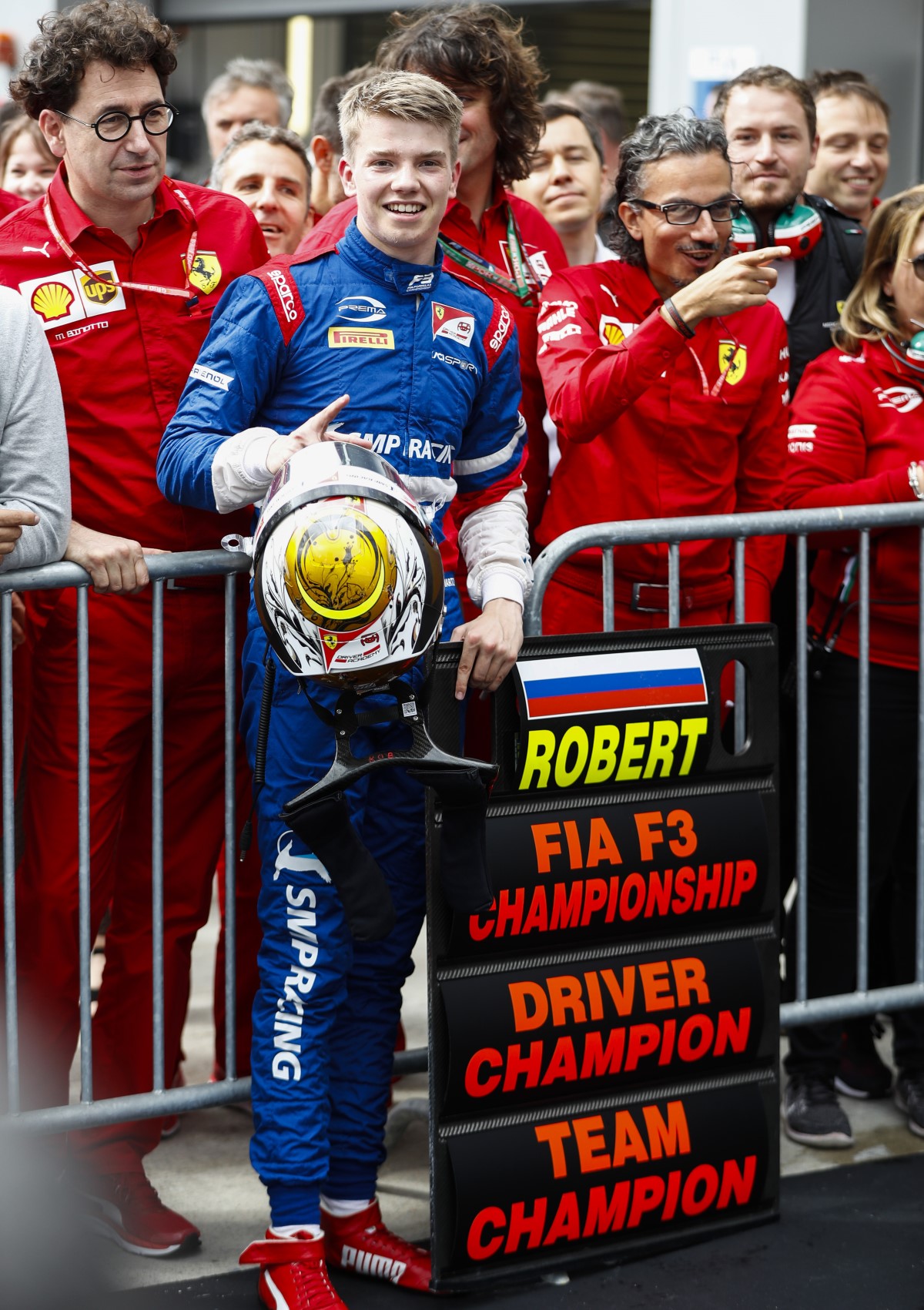 Robert Shwartzman clinched the maiden FIA Formula 3 Championship title in one of the most intense races of the season, but it was his teammate Marcus Armstrong who won, as the Russian settled for second, refusing to risk his crown.

When Marcus Armstrong told reporters that it would be one of the battles of the season, he wasn’t wrong, as three different drivers exchanged P1 in a race-long battle for first, which was only settled on the final lap.

Niko Kari was deeply immersed into that fight, but would ultimately finish the season as he started it in third place, with his first podium since Round 1 in Barcelona. For all of the plaudits that Shwartzman will deservedly receive in the aftermath, Armstrong sealed his third victory of the campaign and matched the champion’s tally.

However, Shwartzman has led the title charge for the majority of the year and knew that finishing ahead of rival Jehan Daruvala would be enough, and the Indian slumped to fifth, after a sluggish start. With his PREMA teammate struggling, this left the Russian needing to drive a conservative race, and he done so like a champion, with minimal risk, and maximum gain.

Dark clouds lingered above the Sochi Autodrom, as rain threatened to spice up a contest that ultimately wouldn’t need it. While Shwartzman got off the line cleanly, Daruvala struggled, slipping as far as sixth by the end of the first turn. This allowed Armstrong a shot at his fellow Ferrari F1 junior and he made light work of the Russian, nipping by after the first corner.

Having taken the lead, Armstrong was the first to discover drops of rain in the latter parts of the track and warned his PREMA team. Further back, Bent Viscaal spun off at Turn 4, which brought out a virtual safety car. With this, Devlin DeFrancesco and Trident made the risk of switching to the wets, but the rain dried up and they were forced to swiftly revert back.

Shortly after going green again, Leong Hon Chio spun off track at the same corner and plunged into the barriers, this time bringing out a safety car. When the SC returned, JÃ¼ri Vips caught the back of Christian Lundgaard. The Dane was able to recover and continue, but Vips was slapped with a 10 second penalty for causing the collision.

Armstrong held on to the lead at the restart, but Kari attacked the back of Shwartzman and eventually dived ahead of the Russian. Having passed one PREMA, the Finn knew his Trident had the pace and began to hurry Armstrong, which set in motion a lap-long tussle.

The Trident racer dived down the inside of Armstrong at Turn 2 and took the inside line on the third corner, narrowly edging ahead off the Kiwi at full throttle as the track began to straighten out again. The Kiwi was pushed back and opted to attack the Finn on the next tour of the circuit, at the first corner. Armstrong sent it down the side of Kari, but missed the turn, which allowed Shwartzman and Leonardo Pulcini to take advantage and steal second and third.

Having dropped to third, Shwartzman was now in contention for the race win once again and forced himself ahead of Kari, lunging past him in a DRS enthused move. With five laps to go, Kari was once again at the mercy of Armstrong, who had already regained third from Pulcini. The Kwi made no mistake with his overtake this time, making it stick on the second turn.

The two PREMAs headed into the final lap in first and second, on course for their third one-two of the campaign. Shwartzman looked set to cap off an incredible season with a fourth victory, but his teammate had other ideas and showed no mercy.

With nothing to lose, Armstrong made a daring lunge at Turn 2 and hauled himself back into the race lead, giving Shwartzman no chance of a reply. Both were euphoric when they crossed the line, as Shwartzman hailed his team, thanking them for an incredible, but tough, season.

Kari completed the podium, with Pulcini and Daruvala completing the top five, ahead of Pedro Piquet, Jake Hughes and Vips. Raoul Hyman secured his first points of the season with ninth place, ahead of Richard Verschoor.

The champion now leads the Drivers’ Championship with 202 points, ahead of Daruvala on 157 and Armstrong on 144, who cannot be caught. Vips is fourth on 126 and Piquet is fifth on 98 points. In the Teams’ Championship, PREMA Racing are first with 503, Hitech Grand Prix are second with 204 and ART Grand Prix third on 174. Trident are fourth with 128 and HWA RACELAB fifth with 92.

Vips will start on pole positon in Race 2 tomorrow, which begins at 9.55am (local time).