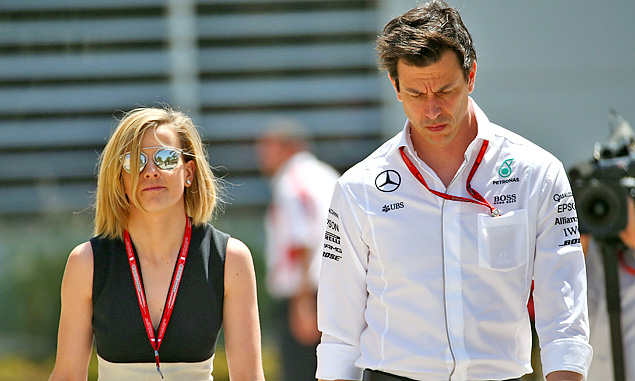 (GMM) Mercedes is struggling at the scene of the Russian GP at Sochi.

The Finnish broadcaster C More says Toto Wolff cancelled a scheduled interview after Friday practice in order to sit in on a crisis meeting about the team's performance.

"We saw that we were behind in practice, but there are always meetings," Valtteri Bottas told the broadcaster.

What is alarming Mercedes is that, after three defeats to Ferrari on the trot, it was Red Bull as well as the Italian team clearly faster on Friday.

"At the moment it's a big question mark," said championship leader Lewis Hamilton.

"The balance of the car is fine."

Boss Wolff agrees: "We are too slow and we do not know why. If we are honest, we are only the third team here in Sochi.

"It looks like we have maybe not pushed the development forward as much as the others."

He admitted that, in the short term, he is hoping forecasts of abysmal weather including heavy rain showers prove accurate.

"Anything that can turn the current order upside down is good for us," said Wolff.

The faces at Red Bull are much brighter, after Dr Helmut Marko blamed a simulator error prior to Singapore for a weak performance.

The only issue is that if Max Verstappen continues to dominate and puts his Red Bull on pole, he will line up just sixth after taking a new Honda engine.

"We have the penalty but I'm not too worried," Dutchman Verstappen said.

"If I had known how difficult Singapore would be, I would have preferred to have it there. But it's only five places and you can overtake here."

Horner agrees: "Our Honda engine now has the power of Mercedes and Renault. Only Ferrari stands out."

Also happy in Russia is Ferrari boss Mattia Binotto, who said practice indicated that the team's three-race winning form is no flash in the pan.

"We have now shown on a second track that our upgrade works," he said. "(It works) on a lap and in the race, even if in general we are a bit stronger in qualifying."