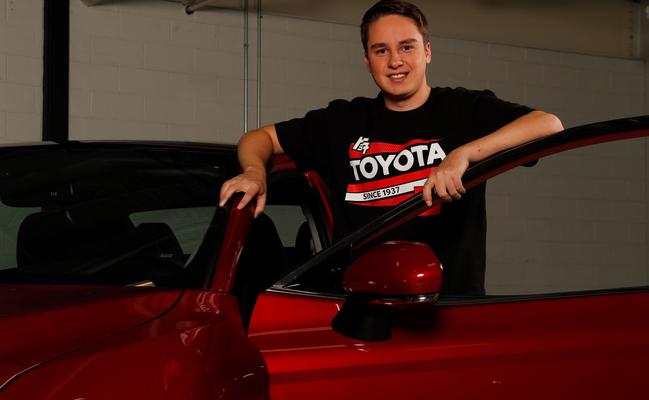 Leavine Family Racing (LFR) announced that Christopher Bell will drive for them in the 2020 Monster Energy NASCAR Cup Series (MENCS) season as the driver of the No. 95 Toyota Camry with sponsorship from Rheem and Procore.

In addition to Bell in the driver's seat, the technical alliance between LFR, Joe Gibbs Racing (JGR) and TRD, U.S.A. (Toyota Racing Development) will also be enhanced for the 2020 season. TRD will continue to build the team's engines and provide technology, data and technical assistance. Enhancements to the technical alliance between JGR and LFR, which began with the 2019 MENCS season, will continue to build into the 2020 season.

Bell's NASCAR Xfinity Series (NXS) crew chief, Jason Ratcliff, will join him in the transition to LFR and the Cup Series. Ratcliff is no stranger to NASCAR's premier series as he spent six full seasons serving as a Cup crew chief at JGR with drivers Joey Logano and Matt Kenseth. Mike Wheeler will remain with LFR and transition to the role of Competition Director, working alongside Ratcliff. Wheeler was instrumental in LFR's growth during the 2019 season serving as crew chief of the No. 95 as the organization ran Toyota Camrys for their first year in an alliance with the manufacturer and JGR. With Wheeler's promotion to Competition Director, Michael Leavine who is LFR's current Competition Director will now become the Vice President of Racing Operations for the organization. Leavine will play an active role in guiding LFR through the upcoming competition changes within NASCAR.

"I've said from the start, I want this team to be competitive," said Bob Leavine, LFR team founding owner. "Christopher is one of the most talented drivers we've seen come up through NASCAR's ranks and together, with JGR and Toyota's support, I'm confident our team will continue to grow, just as it has this past year. We're certainly happy to continue to progress our relationship with both JGR and TRD as the technical partnership takes the next step forward."

Bell is currently competing in his second full-time NASCAR Xfinity Series (NXS) season for JGR, where he's amassed 15 career-series victories and in 2018, set the record for most wins (seven) by a rookie in the series. With seven wins in his Toyota Supra already in 2019, Bell is set for another championship run as he currently ranks first in the driver point standings.

"Since I was young, I wanted to make a career out of racing," said Bell. "To take this next step and race in the NASCAR Cup Series with the support of LFR, JGR and Toyota is just a dream come true. It also means a lot to me to have Rheem make the move to Cup racing with me. I wouldn't be in the position I am today without their support and I'm also excited to have the opportunity to represent Procore now.

"Having been under the JGR banner these past seasons in the Xfinity Series and with TRD for as long as I can remember, having their continued support as I transition to LFR is extremely comforting and will be a tremendous benefit to me. I can't wait to close out this season in the Xfinity Series with a strong run, and I'm looking forward to the challenge that awaits in 2020."

A native of Norman, Oklahoma, Bell began his career racing on local dirt tracks around the Midwest. He then moved on to compete in USAC Racing's National Midget Series where he joined TRD's driver development program and won the 2013 title.

"TRD and Toyota have worked with Bell since his early dirt track career and we've been proud to see him work his way to NASCAR's highest level," said David Wilson, president of TRD. "Christopher is a special talent and we're happy to have him winning races and championships in a Toyota. We look forward to seeing his continued growth and success at Leavine Family Racing in 2020. We're also pleased with how the relationship between JGR and LFR has progressed during their first season working together. We're confident this enhanced alliance for 2020 will continue to make them a threat for race wins week in and week out."

Founding LFR team owners Bob and Sharon Leavine began their foray into the Monster Energy NASCAR Cup Series in 2011. A single-car team, LFR has focused on growing competitively on the race track each year, improving its average finishing position since racing full-time in the series starting with the 2016 season.

Bell will make his Cup Series rookie debut when the 2020 season begins with the Daytona 500 at Daytona International Speedway on Sunday, February 16, 2020.