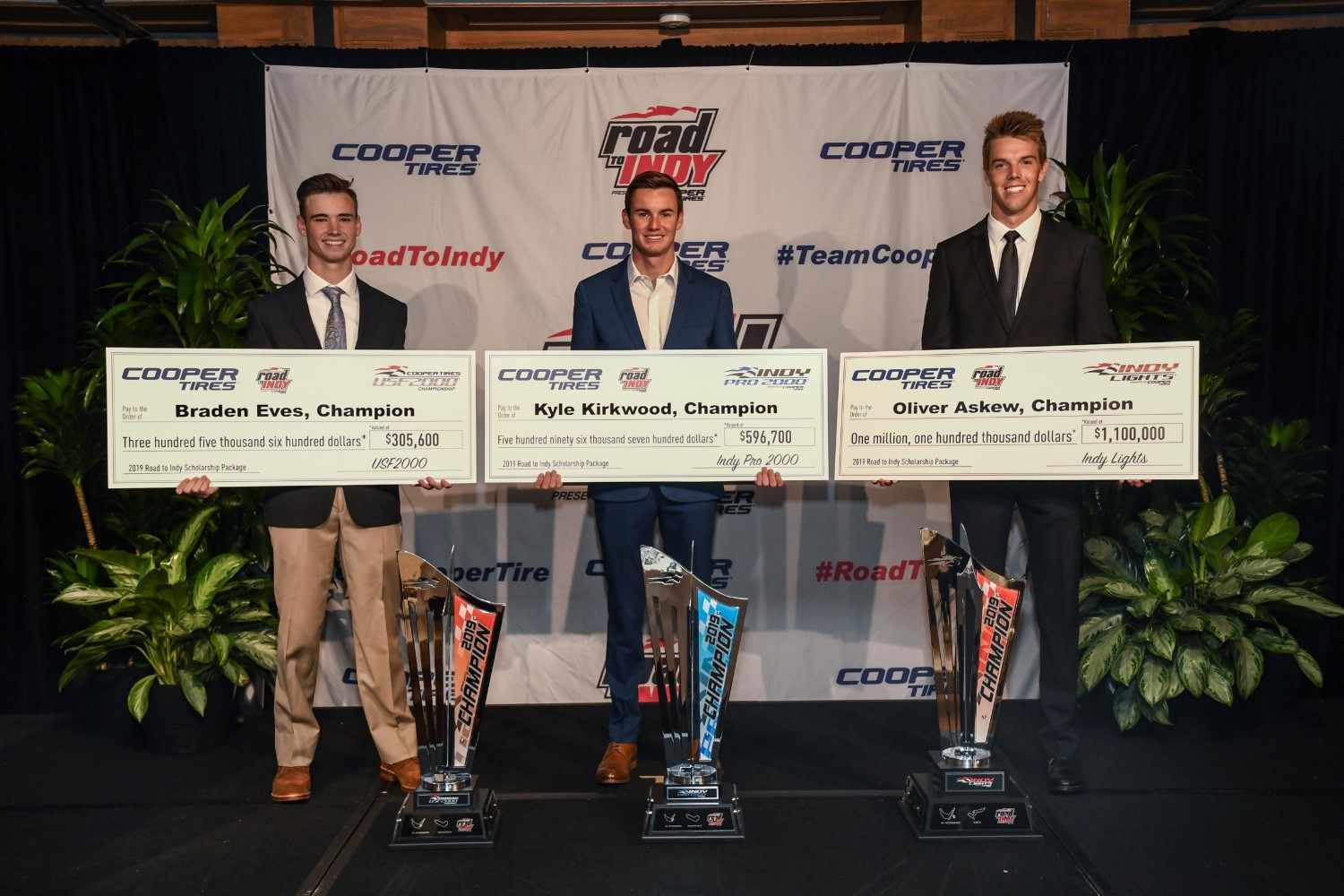 MONTEREY, Calif. – Another exciting season of Road to Indy Presented by Cooper Tires competition, featuring the future stars of North American open-wheel racing, was highlighted at a well-attended Road to Indy Championship Celebration yesterday evening. The Monterey Plaza Hotel, overlooking Monterey Bay on the scenic California Central Coast, provided a glorious setting for over 250 members of the close-knit racing community, including drivers, families, teams and sponsors.

The Road to Indy Presented by Cooper Tires is unique in the world of auto racing, offering scholarships and awards valued at more than $2.2 million for talented young drivers to progress all the way from the grassroots of the sport to the NTT IndyCar Series and the Indianapolis 500. The open-wheel development ladder’s global appeal was underscored this year by the fact that 16 different nationalities from five continents were represented on the grids.

Last night’s champions’ roll was topped by 22-year-old Oliver Askew, from Jupiter, Fla. The Andretti Autosport driver’s payday included a scholarship valued at $1.1 million to guarantee entry into a minimum of three NTT IndyCar Series races in 2020, including the 104th Indianapolis 500. Askew, who has made a meteoric progression from karting to Indy cars inside four years – after earning the inaugural Mazda Road to Indy $200K USF2000 Scholarship Shootout in 2016 and the following year’s USF2000 title – also took home the Indy Lights Rookie of the Year Award.

Coincidentally, Askew’s childhood friend and longtime former karting rival Kyle Kirkwood, also from Jupiter, Fla., enjoyed an equally productive evening. One year on from dominating the USF2000 title-chase, Kirkwood became the first driver since Matthew Brabham in 2012 and 2013 to claim consecutive championships in USF2000 and Indy Pro 2000. Kirkwood’s roller-coaster season with RP Motorsport USA saw him encounter some early season dramas, then overcome a deficit of as much as 45 points to virtually clinch the title with his ninth victory of the season on Saturday at WeatherTech Raceway. All that was required the following day was to start the 16th and final race of the season.

It was just as well, because Kirkwood was eliminated in a crash at the first corner, and with his primary rival, Sweden’s Rasmus Lindh, ending up in Victory Lane, Kirkwood’s final margin was a mere two points to secure a $500,000 scholarship to advance to Indy Lights, a Cooper Tires Tire Allotment Award valued at $66,900 toward his 2020 season and a Series Race Entry Fee Award valued at $29,800 for a total value of $596,700.

The most exciting title-chase of the weekend came in USF2000. Braden Eves, 20, from New Albany, Ohio, arrived in California with a six-point deficit to New Zealander Hunter McElrea, which then became a 12-point hole after McElrea finished second on Saturday with Eves in fourth. But when McElrea hit trouble in qualifying for the final event and Eves made a spectacular pass for the lead on the opening lap and then held on throughout a nail-biting 20-lap race to secure his series-leading sixth win of the season, an emotional first Road to Indy title was assured.

Another traditional element to the evening included the induction of three new members to the Road to Indy Hall of Fame. The Class of 2019 comprises Ed Carpenter, who won the inaugural Indy Lights Freedom 100 at the Indianapolis Motor Speedway and now runs a successful NTT IndyCar Series team; Gerardo Bonilla, a race winner in the 2006 Indy Pro 2000 Championship who is now director of operations for the Lucas Oil School of Racing; and Augie Pabst, a third-generation racer who made 22 USF2000 starts in 1996 and 1997, is a highly valued member of the Road to Indy family as a team owner, and this weekend claimed his third successive USF2000 Team Championship.

Dan Andersen, Owner and CEO of Andersen Promotions: “This completes our 10th season operating the Road to Indy Presented by Cooper Tires and this program continues to do its job of providing the best and most complete training for tomorrow’s IndyCar stars. This evening highlighted so many fantastic seasons by the talented young drivers who make up our fields, and we are very proud to be a small part of their ongoing careers in motorsports. Tremendous thanks to all of our partners and especially to Cooper Tires for all they do to allow us to operate at such a high level. Thanks as well to the Andersen Promotions staff, the best in the business! Congratulations to all of our winners and we’ll all move on to a great 2020 season."

Chris Pantani, Director of Marketing; Event Management, Sponsorships & Motorsports at Cooper Tire & Rubber Company: “This award ceremony tonight celebrates the future stars of the NTT IndyCar Series. The Road to Indy has proven time and time again to be the one true path to IndyCar for any young driver interested in open-wheel racing. It’s unfathomable to believe that in four short years, a young talented driver named Oliver Askew has moved from the ranks of karting to competing in the 2020 NTT IndyCar Series, all because the Road to Indy exists.

“We must also recognize Dan Andersen and the Andersen Promotions staff, as well as all of the teams, sponsors and personnel that are part of the Road to Indy. The dedication and vision of this entire group is what makes the Road to Indy the success we see today."

Oliver Askew, Indy Lights Presented by Cooper Tires champion: “The past three years have flown by, but they are so full of memories I’ll cherish forever. The real hard work starts now, but I think I’m more than ready for the challenge thanks to the Road to Indy. I’m so happy to have received the scholarship toward IndyCar next year: I wouldn’t be advancing without it. It’s pivotal, and it’s been pivotal throughout my Road to Indy career. There’s nothing like this in the world. I look forward to representing what the Road to Indy means to future drivers coming up, to be a role model for drivers who want to reach IndyCar. The Road to Indy works and I am a story of the system. Tonight is the end, but I’ll always be a part of the Road to Indy.

“I’ll miss competing on those levels but I am really looking forward to the future. It’s been a dream come true to drive for Andretti Autosport and I can’t thank them enough for taking a chance on me. To my supporters, my sponsors – including Cooper Tires and Andersen Promotions – and my family, thank you so much. What I’ve learned over the past three years will pay dividends next year in the NTT IndyCar Series."

Kyle Kirkwood, winner of the Indy Pro 2000 Championship Presented by Cooper Tires: “It’s a really good feeling, especially knowing how excited the (RP Motorsport USA) team is – that’s a big part of it for me. They’re so passionate and they really deserve this. Their progression over the past two years has been amazing. They asked me, after this last race, why I picked them, and I told them it was because I could see how well they were doing and how passionate they were. I knew how well they’d done in Europe and I knew they could get it done here.

“I know that I don’t realize now how big this is, that I’ve won two Road to Indy scholarships. I’m sure I don’t realize how big this is for me and for my career. For now, it’s just about doing what I’ve been doing, and after that, everything will fall into place. It’s also great to be able to celebrate this with Oliver. We’ve grown up together, so to see us progress up the ladder is really great. I would like to keep it going in that direction.

“But I don’t want to think about this too much, because I don’t want to go into a relaxed mode, because (next month’s annual) Chris Griffis (Memorial Road to Indy Test at Indianapolis) is right around the corner."

Braden Eves, winner of the Cooper Tires USF2000 Championship: “Winning the championship still hasn’t sunk in completely and I’m not sure it will for a while. Yesterday was the greatest day of my life, and how it all unraveled is so crazy to me. I’m so excited to be on the grid next year in the Indy Pro 2000 series! I’m thankful for so much and I’ve been really reflective on how everything happened – not only this season but in my whole racing career. This has been an amazing night of celebration, not only for me but for the whole Cape Motorsports team and my family. Also, a huge thanks to Andersen Promotions and Cooper Tires for making the scholarship possible, giving hope and a dream to so many drivers. Yesterday, my dreams came true."