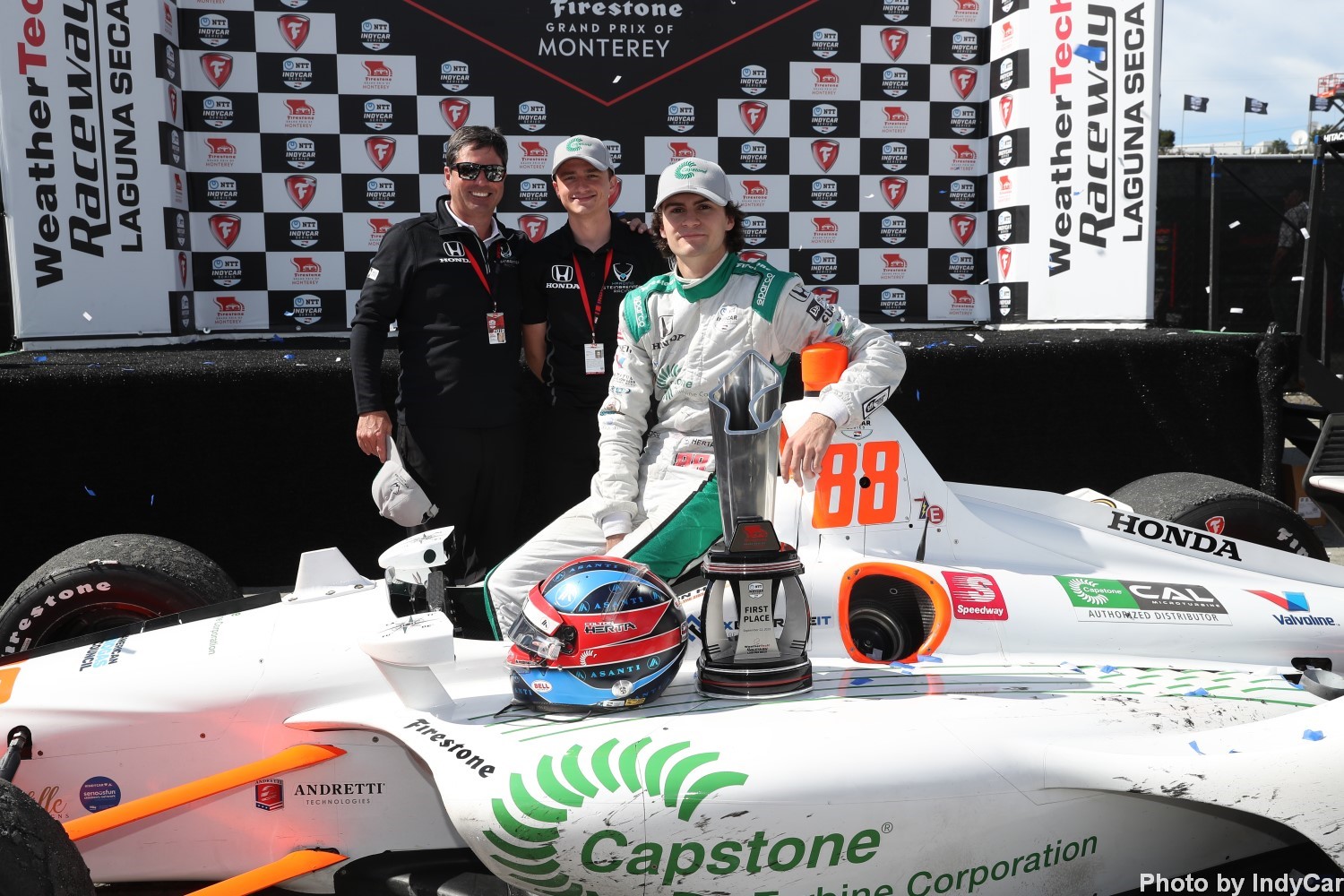 Colton Herta and the No. 88 Capstone Turbine Honda team dominated the Firestone Grand Prix of Monterey at WeatherTech Raceway Laguna Seca this weekend after pacing the field in Thursday’s open test, securing the pole starting position, and leading 84 of 90 laps to win today’s race.

“I’m incredibly happy with how today went," said Colton Herta. “It was spectacular! The No. 88 Capstone Turbine Honda car was amazing today, and the crew guys had three fantastic pit stops. Now, I’m ready for some victory tacos after today’s win. The end of today’s race was really tough with Will Power right behind me, but we were able to hold him off. It means a lot to come home with a victory at WeatherTech Raceway Laguna Seca and to finish the 2019 NTT IndyCar Series season on a high."

"It was incredible to finish off the 2019 NTT IndyCar Series with a win," said co-team owner, George Michael Steinbrenner IV. "Overall this was Harding Steinbrenner Racing's best weekend. The crew executed the pit stops perfectly and Colton drove a race where you couldn't distinguish him from the INDYCAR veterans. It was a great way to end the season and look forward to the future."

The 2020 season begins along the streets of St. Petersburg, Florida on Sunday, March 15 for the Firestone Grand Prix of St. Petersburg. Colton will continue to drive the No. 88 in the 2020 NTT IndyCar Series season with Andretti Harding Steinbrenner Autosport.

Colton Herta began racing go-karts at the age of four. At 12, he turned to cars and promptly won the Pacific F1600 Series championship and finished second in the Skip Barber Summer Series. At 16 years old, the Valencia, California, native quickly impressed by winning the second race of the Indy Lights Presented by Cooper Tires Championship 2017 season. That year he also led the series with seven pole positions, set five new track records and earned Rookie of the Year honors. Most recently, Herta became the youngest winner in NTT IndyCar Series history after winning the INDYCAR Classic. He has also won the 2019 Rolex 24 Hours IMSA race with the Rahal Letterman Racing team and placed second in the 2018 Indy Lights Presented by Cooper Tires Championship with four wins, three pole positions.