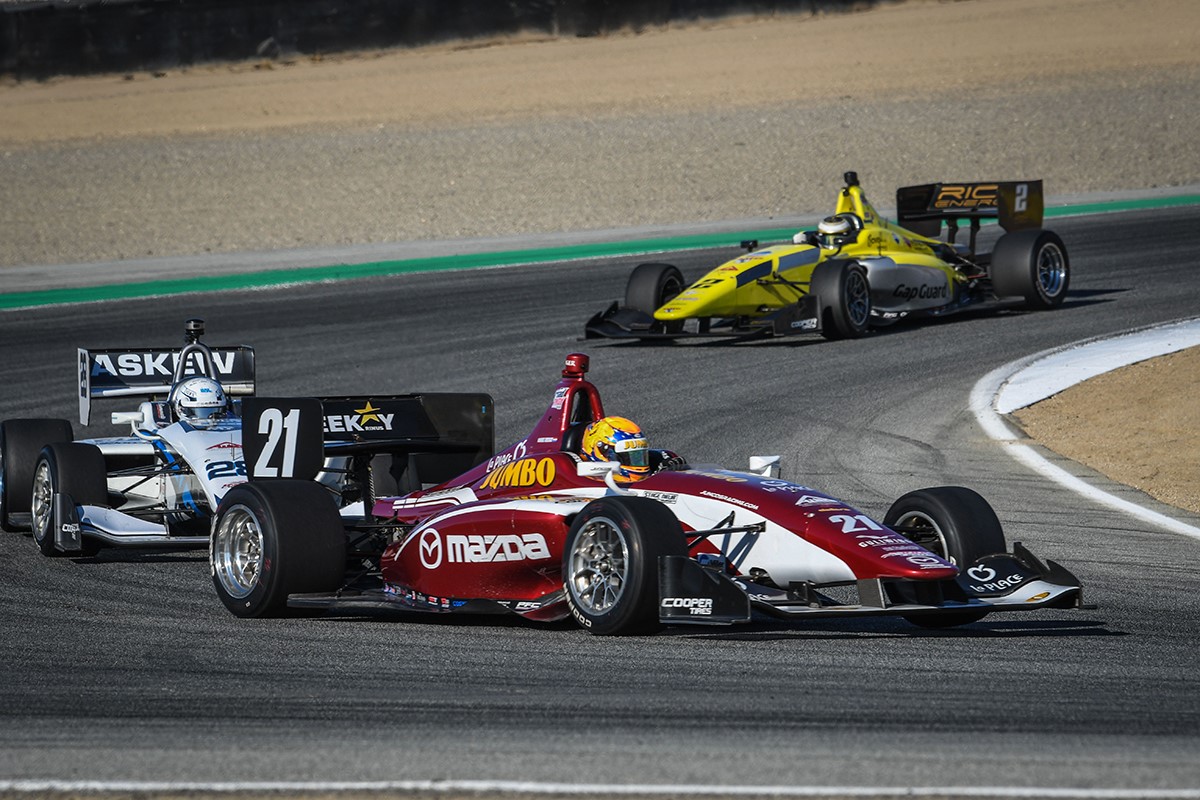 Rinus VeeKay might not have won this year’s Indy Lights Presented by Cooper Tires championship trophy but he certainly demonstrated his class during this weekend’s Cooper Tires Indy Lights Grand Prix Presented by Allied Building Products. VeeKay, 19, from Hoofddorp, Netherlands, claimed a complete sweep at WeatherTech Raceway Laguna Seca, securing two pole positions, two race wins and two fastest race laps, and for the second day in a row he led all 30 laps en route to an emphatic victory for Juncos Racing.

After tying up the championship yesterday for Andretti Autosport, Oliver Askew, from Jupiter, Fla., finished second in this morning’s 18th and final round. Toby Sowery, from Cambridge, England, completed an impressive final phase of the season by finishing third for HMD Motorsports/Team Pelfrey.

Tomorrow at the Road to Indy Championship Celebration Awards Banquet in nearby Monterey, Calif., Askew will pick up the champion’s trophy and a scholarship valued at $1.1 million to guarantee entry into a minimum of three NTT IndyCar Series races in 2020, including the 104th Indianapolis 500.

Significantly cooler conditions this morning made not a lot of difference to VeeKay, who capitalized on his pole position to take the lead as the field headed uphill past the pits and then downhill into the heaviest braking area of the track at Turn Two, the Mario Andretti Hairpin. A good start by Sowery from third on the grid briefly elevated him to second place, but Askew was having none of it and promptly drove around the outside at Turn Two, keeping his nerve and then sneaking back into second place at Turn Three.

VeeKay and Askew traded fastest laps during the first seven laps before VeeKay turned the best lap of the race at 1:16.4032, an average speed of 105.451 mph on Lap Seven. He then carded another 1:06.51 on his next time around the 2.238-mile road course to finally eke out a significant margin for the first time. A series of consistently fast laps enabled VeeKay to stretch his advantage to over three seconds by Lap 20, by which time the game was clearly up for Askew, who settled for second place and eventually took the checkered flag almost six seconds behind his rival.

The victory was VeeKay’s sixth of the season and his 15th in total on the Road to Indy in the span of just three years. He always pocketed the Tilton Hard Charger Award.

Sowery finished on the podium for the third time in as many races, well clear of Robert Megennis, from New York, N.Y., who pulled off the move of the race with a bold inside pass of Andretti Autosport teammate Ryan Norman, from Aurora, Ohio, under braking for the Mario Andretti Hairpin on Lap Seven.

Rinus VeeKay (#21 Mazda/Jumbo Supermarkets/La Place Restaurants/KNAF Talent First-Juncos Racing Dallara-AER IL-15): “The Juncos team gave me a great car and I had a good start, though Oliver was good with the push-to-pass. I’ve learned a lot about tire management and that really came into play today. It was great to win the little battle with Oliver today, to end up with more Road to Indy wins than he has. But the Road to Indy has taught me so much. Everything I’ve learned is what I will take to IndyCar, and I can show them what the Road to Indy means to drivers. I’m so happy, it is the best way to end the Road to Indy for me. I knew the championship was not to be this weekend so to take both wins means a lot. It shows the IndyCar teams what I can do."

Oliver Askew (#28 Index Invest Dallara-Andretti Autosport Dallara-AER IL-15): “It’s still sort of surreal. But I’ve had this mindset all year, dreaming about holding that check at the end of the season – and at WeatherTech Raceway Laguna Seca, where my Road to Indy began. It’s all sinking in now, that this is the end of my Road to Indy. My engineer, Doug Zister, came on the radio and said it was my last stint of the season – and I gave it all I had. We just didn’t have the speed this weekend, Juncos was strong. But I’m happy with our performance, today and all year long. I’m humbled and privileged to have raced for Andretti Autosport all year and hopefully our paths will cross again in years to come. And Rinus – it’s been an honor to race against him. We’ve made each other better drivers and I can’t wait to have more battles with him in IndyCar."

Toby Sowery (#2 Gap Guard/Rich Energy-HMD Motorsports/Team Pelfrey Dallara-AER IL-15): “Today’s race really replicated the championship, with Oliver and Rinus head and shoulders above everyone else. There was a lot less grip than yesterday, but it was quicker. We struggled a bit more than Oliver and Rinus but that wasn’t the main factor in the race today. Oliver and Rinus have done a great job all season. We were really in a no-man’s land – we were better than fourth or fifth but not up there for first or second in the championship. Back at the start of the season, if you had told me I would finish third in the championship, I wouldn’t have believed it, but I still think we could have done better, with small things that could have pushed us up with the leaders. I’m happy, but in hindsight, I am looking back at what I can improve on. We’re pushing for ways to come back, I’d love to return in 2020 and fight for the title."