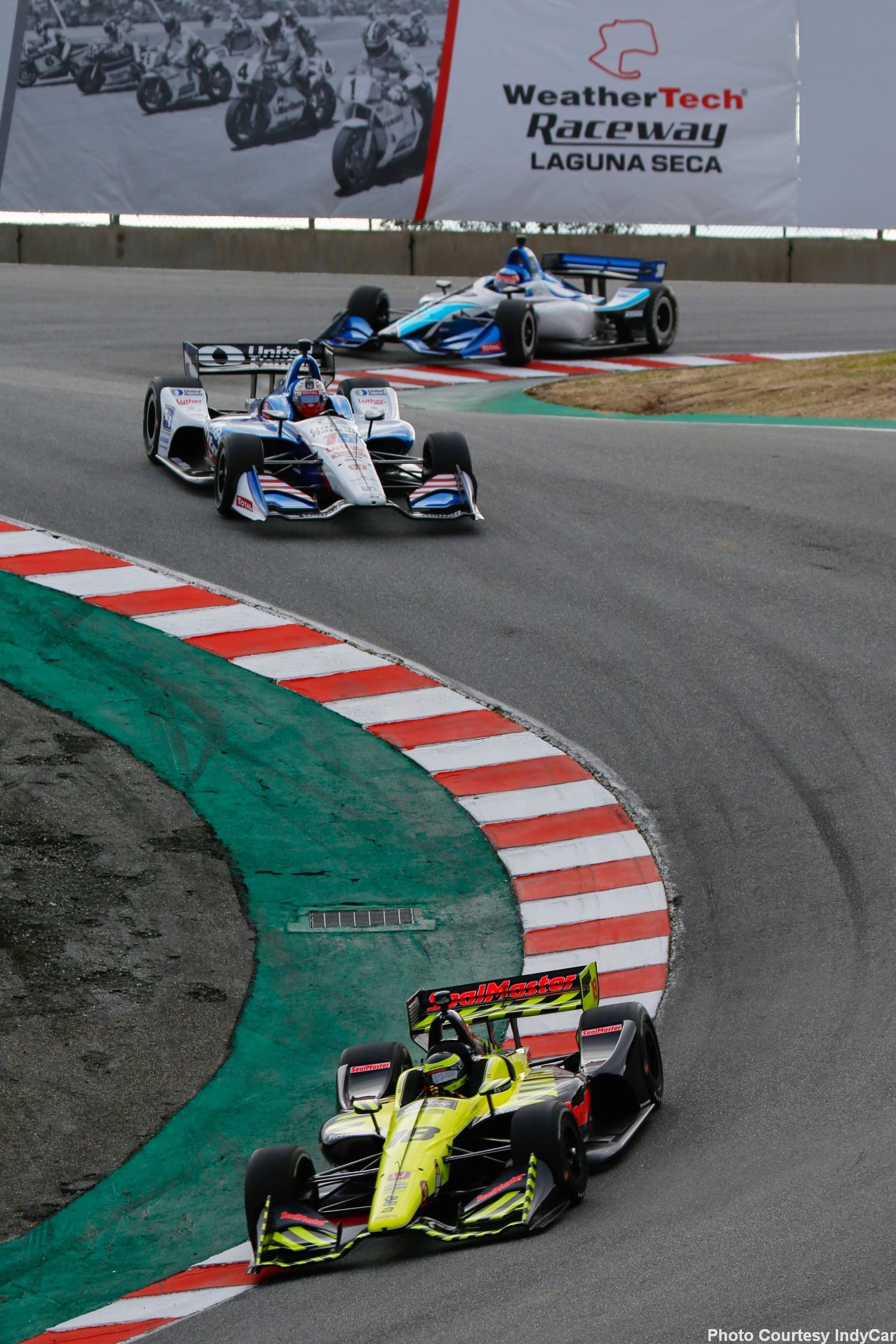 Good morning from the WeatherTech Raceway Laguna Seca. The weather is going to be perfect this whole three day weekend for the final 90 laps of racing of the 2019 season. Temperatures in the low 70s with no precipitation predicted.

It has been 15 years since the IndyCars have raced here at the scenic race track in the Monterey Bay area. There was a tire test day in February but the it was shortened by rain. Cara Adams, Chief Engineer for Bridgestone Americas Motorsports, commented on how they used the data to create a tire for this track.

“Through track surface analysis we determined the surfaces at Laguna Seca are within range of the standard road courses in our series, but we also saw it has very unique differences with clay filling from water runoff and dust coverage from the wind – each of which can change grip levels significantly. After reviewing all the data, the team selected tires similar to what we ran at Portland this year but with increased durability to withstand Laguna Seca’s changing surfaces.”

Yesterday, the IndyCars were given 6 hours of test time to collect data for setting up the cars for the Sunday race. The drivers talked about the track surface and tires yesterday after the two sessions.

Colton Herta, the young rookie driving for Harding Steinbrenner Racing, had plenty to add about his test sessions. ” I took tires up to kind of four runs where I think most people were doing two to three runs. I took every set to four runs.”

“Yeah, had a lot of time with messed-up tires and get a feeling of the car, what I could do with the car to not only go fast but keep the tires under me for 23 laps to 30 laps.”

“I think I found some good stuff not only in the setup but mostly working on my driving from that aspect.”

Ryan Hunter-Reay, the Andretti Autosport driver of the DHL number 28, commented about the track conditions. ” We tested here in mid February with most of the field. It was a day where it was raining on and off. There were some wet spots. It was just kind of a messy test. I think everybody is starting from a clean sheet the paper here. We don’t really know what to expect.”

“I think we’re going to see tire degradation similar to Sonoma where you’re going to have to have kind of a qualifying setup that’s going to be drastically different from a race setup just because of how much the tires are going to degrade on this surface.”

“This place has seen many years, this surface, it’s definitely weathered compared to the last time I’ve been here, just meaning it eats the tires quicker.”

Will Power, the only Team Penske driver that is a non championship contender, was the seconded fastest in the test sessions. Power added his thoughts on the track conditions. “The track was a lot better than when I tested here last. I was pleasantly surprised. It’s quite fun out there. Tires degrade, the cars slide around. I think that’s good, definitely in the drivers’ hands.”

Today’s first practice session is at 10:30 am local time for 45 minutes. The second practice is scheduled for 2:10 pm, with a 30 minute session starting at 3:10 pm for pit stop practice. The pit stop practice replaces the Sunday morning warmup before the race, that starts at 12:15 pm.