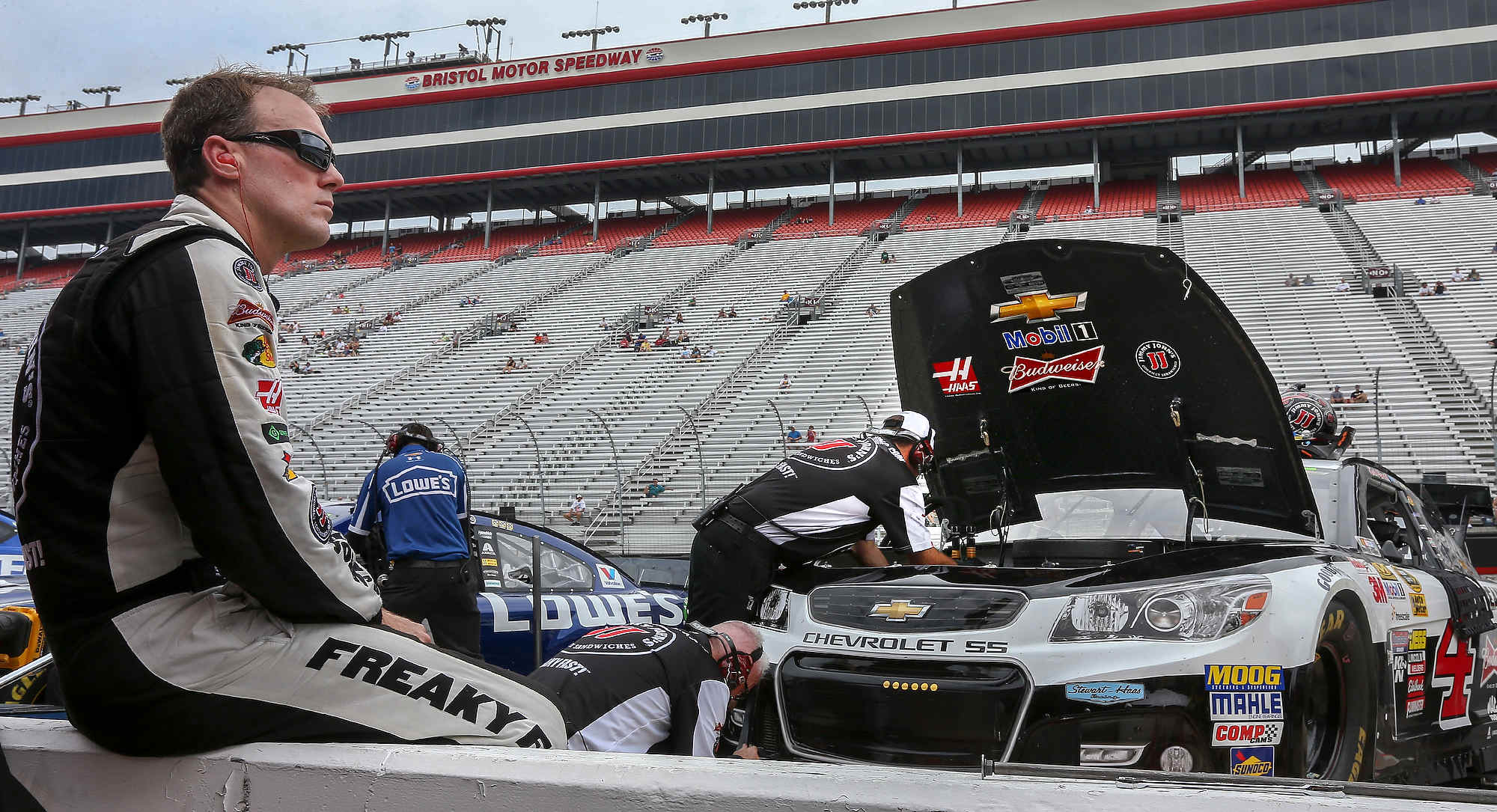 Harvick scored his fifth pole of the season and the 11th of his career with a fast lap of 131.362 mph in the final round of qualifying. That set a new track record at Bristol.

Gordon topped the first round of qualifying and will join Harvick on the front row. The two drivers have combined to take the last four poles in the Sprint Cup Series with Harvick taking it at Indianapolis and Bristol and Gordon grabbing the pole at Watkins Glen and Michigan.

Carl Edwards will start third with Kyle Busch on Row 2 with him. Edwards won the spring race at Bristol, the Food City 500, and Busch has five career Sprint Cup wins at the 0.533-mile track.

Larson was not the only driver to hit the wall in qualifying.

Aric Almirola, who finished third in the spring race at Bristol, also tagged the wall during the first round of qualifying. A cut tire sent Casey Mears into the wall as well. Rookie Cole Whitt spun out during a lap with both the front and rear of the car hitting wall.

Ricky Stenhouse Jr. missed the first 19 minutes of the 30-minute opening round of qualifying as his car was going through technical inspection. Stenhouse had topped final practice but did not advance to the final round of qualifying. He finished second in the spring race this year.

Notable drivers to not advance to the final round of qualifying: Denny Hamlin, Clint Bowyer, Matt Kenseth and Dale Earnhardt Jr.

The Irwin Tools Night Race will be on Saturday at 7:30 p.m. ET with television coverage on ABC.

KEVIN HARVICK, NO. 4 JIMMY JOHN'S CHEVROLET SS – POLE WINNER
YOU ARE THE TRACK RECORD HOLDER AT BRISTOL MOTOR SPEEDWAY HOW DOES THAT FEEL?
"It feels great. Just have to thank everybody on our Jimmy John's team for really everything they do every week for qualifying and race cars that they bring to the race track are just incredibly fast. They have helped improve my qualifying record a tremendous amount. Today was no different."

HOW ABOUT A WIN TOMORROW NIGHT?
"Track position is definitely as important as it is anywhere here with the current groove and where you are running. I felt good about our car during practice and just have to stay in there all night and do the best we can."

JEFF GORDON, NO. 24 DRIVE TO END HUNGER CHEVROLET SS – QUALIFIED 2ND
"Gosh I'm still excited. In practice we were pretty good, but we needed a little bit more and again just a great team effort and communication by this Drive To End Hunger Chevy SS team. We are just so thrilled to get a front row start here at Bristol. That means a lot. I know it wasn't a pole, Kevin (Harvick) put up a great lap. I thought I had a really good lap that first run out. I came on the radio and I said ‘that is all I got.' When you go do that and the car is well balanced and you get a good lap you know that it's up to somebody else to just take a little more risk and maybe get it and Kevin did. Hats off to them and another great start to a weekend for this team. To go to Watkins Glen, Michigan and then back to Bristol and be this competitive is just a real testament to how great this team is and that No. 24 Chevrolet."

JIMMIE JOHNSON, NO. 48 LOWE'S CHEVROLET SS – QUALIFIED 4TH
"It's not bad at all. We usually struggle a lot on Friday and then qualifying is normally difficult. We had a great practice session, great qualifying effort. Of course we want to be better, but I think my strength is racing and come race time we are going to be in a lot better shape."