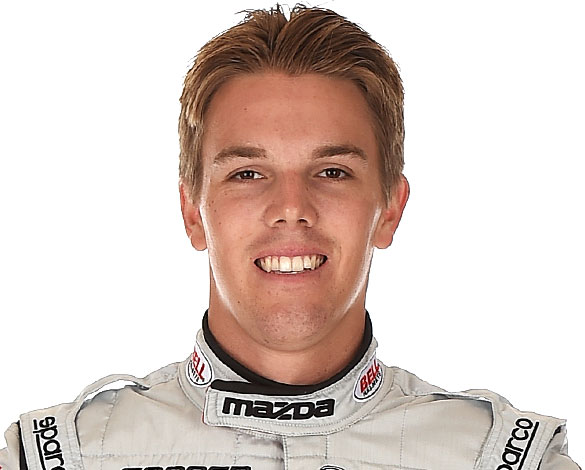 The world-renowned road course features a wide variety of turns within its 2.238-mile length, including the notorious “Corkscrew" turn which incorporates a sharp left-hand turn, followed immediately by a steep drop equivalent to approximately six stories in height and a sweeping, downhill right-hand corner that demands the best of both man and machine. Situated just a few miles from the Monterey Peninsula, Big Sur and the Pebble Beach golf haven on California’s scenic Central Coast, WeatherTech Raceway provides some of the best spectator viewing.

Most of the Team and Driver Championships remain undecided prior to the final weekend of the season, but an impressive total valued at more than $2.2 million will be distributed on Monday during the traditional Road to Indy Presented by Cooper Tires Championship Celebration at the Monterey Plaza Hotel in nearby Monterey, Calif.

Askew to Clinch Where his Journey Began
A pair of podium finishes in the two most recent Indy Lights races at Portland International Raceway meant that rising open-wheel star Oliver Askew, 22, from Jupiter, Fla., essentially needs only to take the green flag for Andretti Autosport in this weekend’s final two races to be assured of a scholarship which will guarantee him entry into a minimum of three NTT IndyCar Series races in 2020, including the 104th Indianapolis 500.

The fact that Askew will formally clinch his third Road to Indy Scholarship at the Californian venue is entirely appropriate, since it was at the same legendary track that his auto racing career effectively began in 2016. After winning a coveted Mazda Road to Indy $200K USF2000 Scholarship Shootout, Askew went on to claim the following year’s USF2000 Championship. Now, just three years later – after recently gaining his first taste of an Indy car with Chip Ganassi Racing at Portland – he is on the verge of completing a meteoric rise from karting to the pinnacle of the sport.

“I am excited to be heading to Laguna Seca this weekend for the season finale," said Askew. “It is pretty cool and unique to think that my Road to Indy career started and could hopefully end here. We are focused on capping off the season with a pair of race wins and we know we will bring home this championship."

Askew’s principal rival, young Dutchman Rinus VeeKay, has mirrored Askew’s progress through the ranks. VeeKay, who recently celebrated his 19th birthday, finished second to fellow USF2000 rookie Askew in 2017, then earned his own scholarship by stylishly securing last year’s Indy Pro 2000 Championship. This year he and Juncos Racing seem set to play second fiddle but VeeKay has every intention of rounding out his equally impressive Road to Indy career with victory on the West Coast. He, too, seems set for a long career in IndyCar racing.

Askew’s Andretti Autosport teammates, Ryan Norman, from Aurora, Ohio, and Robert Megennis, from New York, N.Y., have both tasted the spoils of victory this year and will be seeking more hardware this weekend.

Meanwhile, one of the hottest properties in recent events has been Toby Sowery. The 23-year-old from Cambridge, England, began his first full season of racing in North America on a wing and a prayer, but six months after earning two trips to the podium on his very first visit to the streets of St. Petersburg, Fla., Sowery recently secured a richly deserved maiden race win for the reconstituted HMD Motorsports/Team Pelfrey organization at Portland. Teammate and fellow rookie David Malukas, from Chicago, Ill., is the youngest driver in the field at age 17, but he, too, has made a strong impression with a pair of podium finishes.

Norman, Sowery and Megennis are entrenched in a three-way battle for third in the championship with 14 points separating the trio. Andretti Autosport has already secured its second consecutive Team Championship.

The Cooper Tires Indy Lights Grand Prix Presented by Allied Building Products will begin with a 45-minute practice session at 9:30 a.m. PDT on Friday, September 20, followed by qualifying for Race One at 3:55 p.m. Qualifying for Race Two is set for 9:15 a.m. on Saturday. The green flag for Race One, to be held over 30 laps, will fly at 3:10 p.m. Saturday afternoon, with the 35-lap Race Two contest set for 9:10 a.m. on Sunday.

In the U.S., both races will air live and on demand on NBC Sports Gold with practice and qualifying coverage carried via live streaming on the Road to Indy TV App, RoadToIndy.TV, indylights.com and indycar.com. Internationally, all practice, qualifying and race events will be live streamed on the Road to Indy TV App, RoadToIndy.TV and at indylights.com. Additional coverage can also be found on the Advance Auto Parts INDYCAR Radio Network broadcasts which airs live on network affiliates, Sirius 216, XM 209, indycar.com, indycarradio.com and the INDYCAR Mobile App powered by NTT Data.

Kyle Kirkwood, who coincidentally hails from the same town, Jupiter, Fla., as Oliver Askew, has put himself in position to go one better than his childhood friend and karting rival. Just one year after dominating the 2018 USF2000 Championship with a record-breaking 12 wins in only 14 races, Kirkwood, 20, is on the verge of adding the Indy Pro 2000 Championship crown following a stunning run of success with Italian-owned RP Motorsport USA which has brought victory in eight of the last nine races.

Kirkwood’s remarkable strike rate of .714 – 20 wins from 28 Road to Indy starts – has seen him turn a 45-point deficit over Juncos Racing’s young Swedish rookie Rasmus Lindh into a 20-point advantage heading into this weekend’s Cooper Tires Indy Pro 2000 Grand Prix Presented by Allied Building Products. One more win on Saturday, plus one of the three bonus points on offer for pole position, fastest race lap and leading most laps, would require Kirkwood merely to take the green flag on Sunday to put the crown beyond his rival’s reach. Alternatively, even if Lindh were to sweep the double-header finale, a second and a third-place finish would be enough for Kirkwood to become the first driver since Matthew Brabham in 2012 and 2013 to clinch consecutive USF2000 and Indy Pro 2000 championships.

The battle for third in the points table is equally finely poised, with Canadian Parker Thompson (Abel Motorsports), Singapore’s Danial Frost (Exclusive Autosport) and Sting Ray Robb (Juncos Racing), from Payette, Idaho, all blanketed by 20 points. Thompson and Frost already have a pair of race wins under their belts, while Robb is anxious to add his name to that roster after finishing on the podium no fewer than five times this year. Robb also snagged his first career pole last time out at Portland.

The largest field of the season, 15 cars, will ensure that the championship contenders will likely not have things all their own way.

McElrea Holds the Upper Hand in USF2000
The stage is set for the closest Road to Indy title-chase of all, in USF2000, with California-born, Australian-raised New Zealander Hunter McElrea (Pabst Racing) having eked out a slender six-point edge over Braden Eves (Cape Motorsports), from New Albany, Ohio.

That there is even any doubt about who will win the coveted Road to Indy Scholarship, valued at over $300,000 to ensure graduation to Indy Pro 2000 in 2020, speaks volumes for the tenacity of McElrea, who with five of the season’s 15 races in the books trailed his rival by a whopping 44 points.

Eves had picked up the gauntlet laid down by 2018 champion Kirkwood by winning the first four races on the bounce for Cape Motorsports, which, impressively, has claimed the last eight USF2000 drivers’ titles in a row. But fellow rookie McElrea finished on the podium in all four of those races. He then claimed an emotional breakthrough maiden victory at Pabst Racing’s home track, Road America, in June. More recently McElrea, 19, has claimed three consecutive wins of his own, at Mid-Ohio and Portland, to elevate himself to status of hunted, rather than hunter, heading into this weekend’s Cooper Tires USF2000 Grand Prix Presented by Allied Building Products.

But Eves, 20, bounced back from a sticky mid-season to claim a pair of runner-up finishes in Oregon to keep himself firmly in contention. It promises to be an intriguing battle between two very talented youngsters.

The Team Championship is equally finely poised with Pabst Racing, which is searching for a third straight championship – and an overdue first drivers’ title – currently just three points ahead of Cape Motorsports.

Darren Keane (Cape Motorsports), from Boca Raton, Fla., and Colin Kaminsky (Pabst Racing) from Homer Glen, Ill., are separated by just four points in their quest for third in the standings, while Danish rookie Christian Rasmussen has closed to within a dozen points after claiming two wins and five podium finishes in his last six starts for Jay Howard Driver Development.

Jak Crawford, from Houston, Texas, is one of no fewer than three 14-year-olds among the 18-car entry list alongside Cape Motorsports teammate Reece Gold, from San Juan, Puerto Rico, and local driver Nolan Siegel, from Palo Alto, Calif., who will be making his home-track debut with Newman Wachs Racing.

Second-generation racer Eduardo Barrichello, from Sao Paulo, Brazil, showed good speed after joining DEForce Racing for the first time at Portland three weeks ago, while Mexican teammate Manuel Sulaiman is seeking to rekindle the form that brought him two podiums in the first three races of the season.

Ayrton Ori (Legacy Autosport), from Orlando, Fla., will once again join Portland podium finisher Zach Holden, from Greenfield, Ind., in the two-car Legacy Autosport team, while Wyatt Brichacek, from Johnstown, Colo., also seeks to gain experience ahead of a potential full-season program in 2020 by making his USF2000 debut with Jay Howard Driver Development.