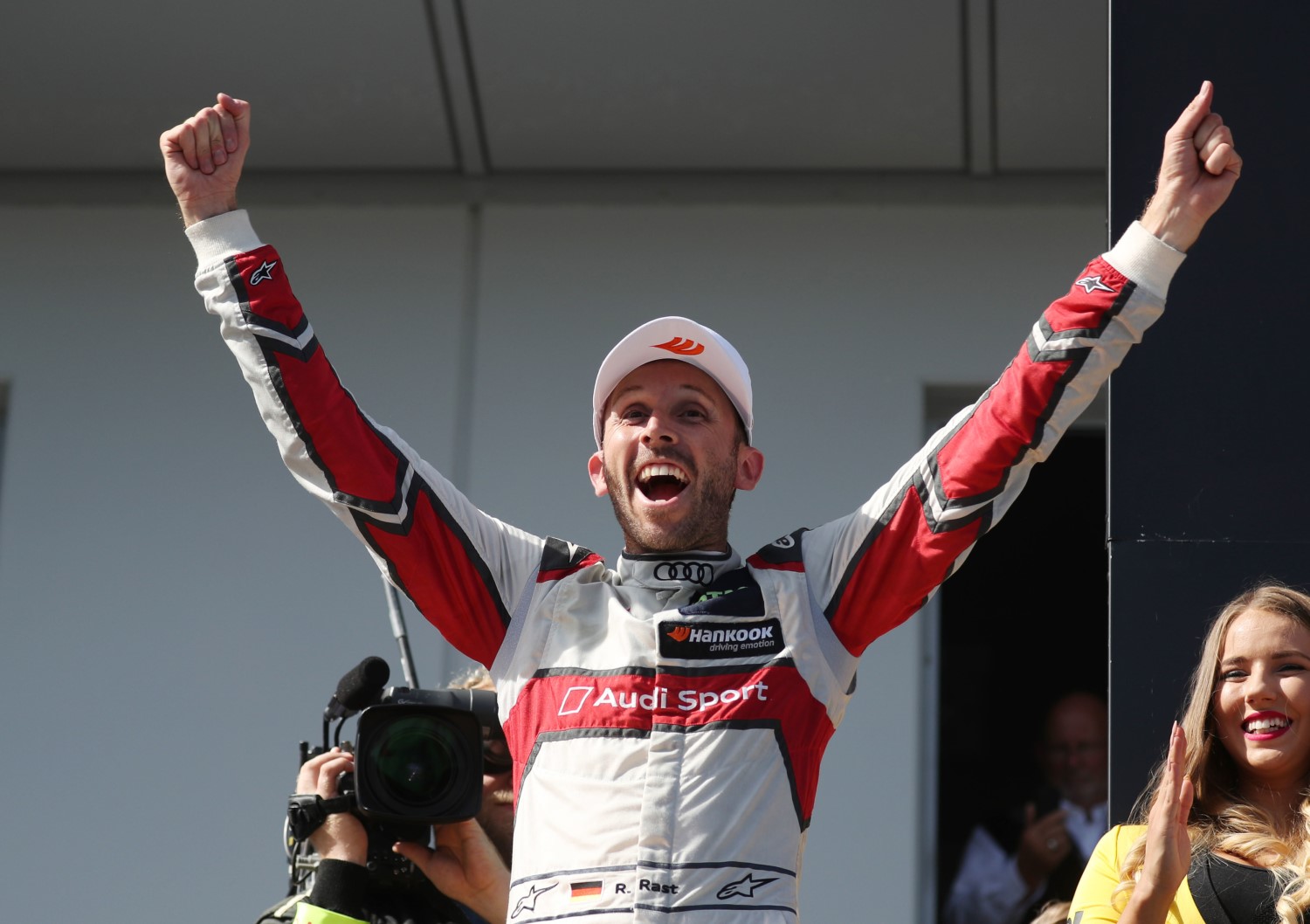 The triple has been perfected: Following the win of the DTM manufacturers’ championship, Audi also secured early title wins in the drivers’ and teams’ championships at the Nurburgring. The first DTM Champion in the new turbo era is Rene Rast, who only needed to finish Sunday’s race in third position to win the title.

“I still can’t believe it," said the 32-year-old German, who only found out that he won the title as early as in the season’s third from last race from his race engineer on team radio after crossing the finish line. “What a year! We were extremely strong nearly everywhere. Clinching the title even before the last race weekend is incredible. Team Rosberg, which did a fantastic job, has a really big part in this. And Audi of course: the Audi RS 5 DTM has been the best car this year with the best turbo engine."

“We didn’t expect to win the championship so early and, above all, not in such a dominant way," said Head of Audi Motorsport Dieter Gass, after Audi had taken the top seven spots in Sunday’s race. “Rene (Rast) is now a two-time DTM Champion – and deservedly so in every respect. He’s shown an impressive season. Congratulations to him, to his team, but also to the whole Audi family. ‘Thank you’ to all who made this outstanding success possible: It’s fantastic to work with such a great team! Today, we’re going to have a big party. And afterwards, we’ll look forward to the finale at Hockenheim together with the cars from the Japanese Super GT. That’s going to be another absolute highlight."

Following his victory on Saturday, Rast, with second place in qualifying – just one thousandth of a second behind Jamie Green – and third position in the race scored exactly the number of points he need for his early title win. Before the last two rounds, the driver from Audi Sport Team Rosberg has an unreachable 56-point advantage over his closest rival, Nico Muller, from Audi Sport Team Abt Sportsline.

After a sensor defect in qualifying, Muller started from 14th position. In his 100th DTM race, the Swiss fought back to the fifth spot before losing one position and along with it his last chance for the title shortly before the end of the race. “I pitted early and in the end was struggling with my tires," said Muller. “After qualifying, it was clear that it would be a difficult race for us. Sixth place was the maximum. Unfortunately, the title race has now been decided. I’m happy for Rene and Audi, who did a great job and deserve the title. But of course I’d have liked postponing the title decision to the finale at Hockenheim."

Rast’s teammate Jamie Green secured pole position and victory in Sunday’s race. The Briton prevailed against Rast in a direct duel and at the end of the race defended himself against the attacks by Robin Frijns who challenged him on fresher tires in the final stage. “I didn’t even know anymore what a victory in the DTM feels like," said Green. “My last victory was two years ago. All I can say is: it feels fantastic! It was a superb battle today. All Audi drivers wanted to win. I’m happy that I saved victory across the finish line."

With Loic Duval, Jonathan Aberdein, Nico Muller and Mike Rockenfeller in positions four, five, six and seven, Audi celebrated a 1-2-3-4-5-6-7 success on Sunday, marking the so far best result of a manufacturer in the new turbo era of the DTM.

Audi is assured of winning the title in the teams’ championship, to

With a dominant victory in Saturday’s race at the Nurburgring, Audi driver Rene Rast has come a lot closer to winning his second DTM title. Before the last three rounds, the German has an advantage of 47 points over his fellow Audi driver Nico Muller and of 80 over BMW driver Marco Wittmann. A maximum of 84 points are yet to be awarded.

The driver from Audi Sport Team Rosberg already extended his advantage in the overall classification at the Nurburgring in the morning: for the seventh time this year, Rast scored the three additional points for pole position. As a result, the German has netted 30 points just in qualifying in the 2019 season – an absolute record.

Everything went according to plan for Rast in the race as well: following a good start, he pulled clear of his immediate rivals, achieved an advantage of about six seconds and subsequently controlled the pace at the front of the field in commanding style. At the finish, he had a more than ten-second advantage over Bruno Spengler in a BMW.

“That was a perfect day," said Rast after his sixth victory this season and the 16th triumph in total in his DTM career. “The car, the strategy, the pit stops: everything today was just perfect. A big ‘well done’ goes to my team that has been doing an outstanding job so far this weekend. That was an important step toward the championship title today. I hope that tomorrow we’re going to have another day like this."

By contrast, the title ambitions of his closest rival, Nico Muller, from Audi Sport Team Abt Sportsline suffered a bitter blow. The Swiss had secured the third spot on the grid but jump-started and, in 16th position, finished the race out of the points. “The jump start was clearly my own fault," said Muller. “The lights were red for a long time. I only had the choice between stalling the engine or driving off."

Major misfortune also struck Mike Rockenfeller, who in the home round of Audi Sport Team Phoenix was running directly behind Rene Rast for 25 laps but then had to park his Audi RS 5 DTM early due to an oil leak in the area of the engine environment.

Consequently, Jonathan Aberdein from the customer team WRT Team Audi Sport was the second-best Audi driver. Following a strong race, the South African crossed the finish line in fourth position, even before Loic Duval and Jamie Green. Robin Frijns fought back from the last spot on the grid to tenth place after having stopped at the start.

“We saw another fantastic race by Rene (Rast) today," said Head of Audi Motorsport Dieter Gass. “In qualifying, he was in a class of his own once again, had a very good start, subsequently controlled the whole race and made no mistakes. It’s unfortunate that Mike (Rockenfeller) was forced to retire – he, too, drove a strong race and would have deserved the runner-up’s finish. Nico (Muller) was perhaps a little too ambitious at the start. After jump-starting, his race was ruined."

On Sunday, Rene Rast will have the chance to secure the DTM drivers’ title early. To do so, the Audi driver would have to score nine points more than Nico Muller and, at the same time, Marco Wittmann not reduce his deficit to Rast by more than 23 points.

However, the teams’ championship will only be decided in the finale at Hockenheim. In it, Audi Sport Team Rosberg is now ahead of Audi Sport Team Abt Sportsline again by a narrow margin.