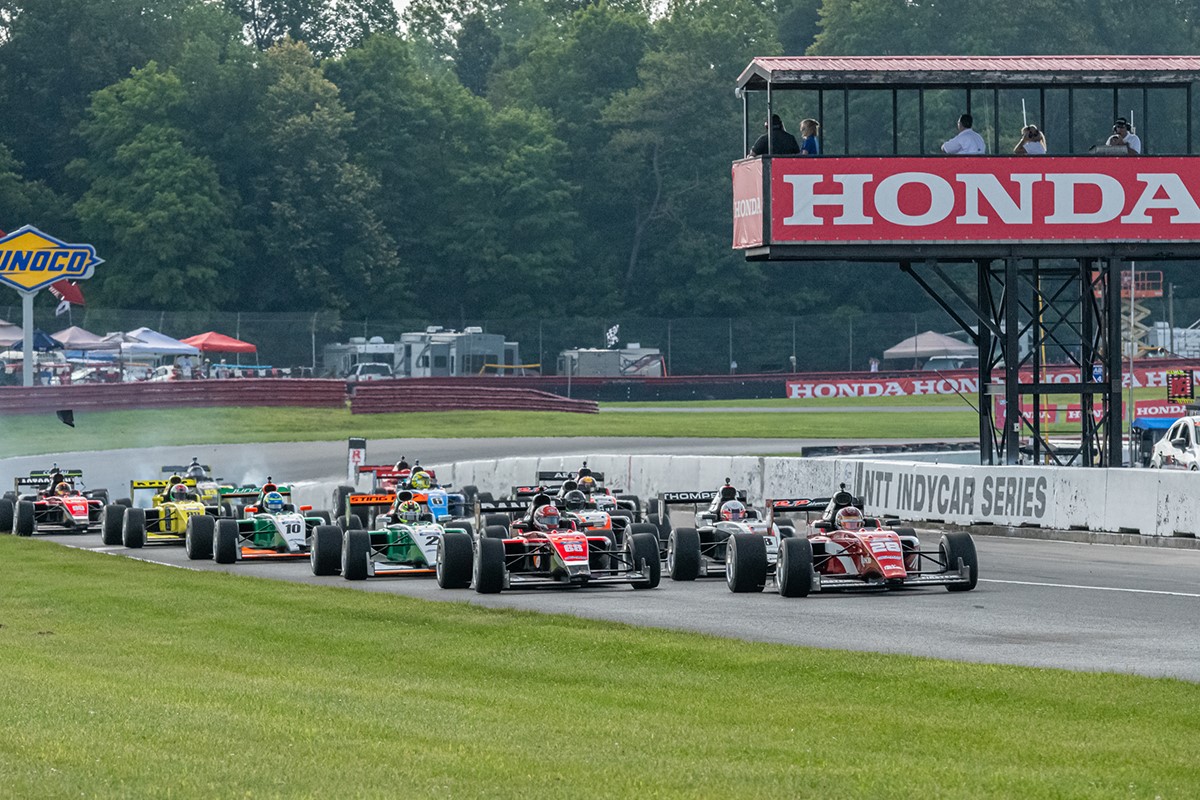 The Road to Indy has been helping drivers ascend the motorsports ranks since 2010. In this year’s 103rd Running of the Indianapolis 500, 23 of the 33 starters were graduates including nine Indy Lights champions. The platform is also well-represented on the NTT IndyCar Series grids with 26 Road to Indy graduates contesting events this season.

Oliver Askew, who will capture his third Road to Indy scholarship – a guaranteed three-race program in the NTT IndyCar Series including the Indianapolis 500 – with the Indy Lights title when he takes the green flag for the final two races at WeatherTech Raceway Laguna Seca on September 21/22, exemplifies the success of the program with his swift rise through the ranks, going from karts to IndyCar in four years.

“My preparation for IndyCar could not have been done better anywhere else other than the Road to Indy, for reasons both on and off the track," said Askew. “From USF2000 to Indy Pro 2000 to Indy Lights, the steps work in perfect harmony with about a five mile per hour average lap speed between the three steps. From tire management, to set up evolution and engineering, to track knowledge, most of the experiences I have come across through the RTI I will eventually call upon while competing in IndyCar. I have also found it crucially important to continually show my face and compete in front of IndyCar team owners and personnel."

Following a successful revitalization of the entire Road to Indy with new chassis introductions over the course of the past few years, Andersen Promotions today also announced extensions on all equipment packages to assist with team budgets. The Indy Lights Dallara IL-15 will remain in competition for at least three more seasons through 2022, and the Indy Pro 2000 Tatuus PM-18 and USF2000 USF-17 through at least 2024.

To date this season, 25 track records have been broken across the three series.

As a prelude to the 2019 season, Andersen Promotions will host the ninth annual Chris Griffis Memorial Road to Indy Open Test at the iconic Indianapolis Motor Speedway Grand Prix Circuit on October 19/20. In addition to two days of testing for Indy Lights, Indy Pro 2000 and USF2000, the outing will comprise additional value-added elements as part of the Road to Indy’s traditional Summit program – an educational driver development component of the three ladder series.

Summit activities will take place on Friday, October 18, and will include a visit to the headquarters of Ed Carpenter Racing; a tour of NTT IndyCar and Indy Lights chassis manufacturer Dallara, including its high-performance simulator; a presentation/demonstration by Jim Leo of PitFit Training, the industry leader in driver performance training; an evening outing/reception at Sarah Fisher’s Speedway Indoor Karting; and training opportunities with Darren Manning’s iAdvance Motorsports Simulator.

Spring Training will once again be held at Homestead-Miami Speedway’s 2.210-mile road course located in Homestead, Fla., on March 7-9. Indy Pro 2000 and USF2000 with share the track on Saturday and Sunday (March 7/8) with Indy Lights having a dedicated test day on March 9. Additional activities will include a comprehensive competition presentation and media training as a continuation of the Summit program.

“I am very happy with our calendar for next season," said Dan Andersen, Owner and CEO of Andersen Promotions. “We’ve managed to eliminate the large break we have had in April with a return to Barber Motorsports Park for Indy Lights and the addition of Circuit of The Americas for Indy Pro 2000 and USF2000. Now all three series are racing monthly from March through September.

“Juggling our test days to coincide with race events will aid teams with their budgets while providing valuable additional track time over our 2019 schedule. We’ve also extended the life of our three chassis across the board to provide additional cost savings to our teams.

“As we head to WeatherTech Raceway Laguna Seca for our season finale for all three series in conjunction with IndyCar, we’ve enjoyed a tremendous year so far. The level of competition has been outstanding with two championship titles still up for grabs. We have welcomed several new teams to our paddock including Abel Motorsports, HMD Motorsports, Jay Howard Driver Development, Legacy Autosport, Miller Vinatieri Motorsports and Pserra Racing. We have additional teams looking to join our Road to Indy family and several of our established teams looking to expand their programs to other levels of the ladder system. We’re looking forward to another great season in 2020 in developing the future stars of IndyCar."

The 2020 Indy Lights calendar will feature an 18-race, 10-event schedule comprised of six road course, two street circuit and two oval events highlighted by the crown jewel in the schedule – the Freedom 100 Presented by Cooper Tires on Carb Day for the 104th Running of the Indianapolis 500.

In the U.S., all races will air live and on demand on NBC Sports Gold with practice and qualifying coverage carried via live streaming on the Road to Indy TV App, RoadToIndy.TV, indylights.com and indycar.com. Internationally, all practice, qualifying and race events will be live streamed on the Road to Indy TV App, RoadToIndy.TV and on the Indy Lights Facebook page. Additional coverage can also be found on the Advance Auto Parts INDYCAR Radio Network broadcasts, which airs live on network affiliates, Sirius 216, XM 209, indycar.com, indycarradio.com and the INDYCAR Mobile App powered by NTT Data, as well as dedicated broadcast channels on Apple TV, Amazon Fire, Roku and Xbox One.

Open tests are scheduled at Homestead-Miami Speedway on March 9 (road course), the Indianapolis Motor Speedway – May 7 road course and May 18 oval – the Mid-Ohio Sports Car Course on August 12 and World Wide Technology Raceway at Gateway on August 20.

The Indy Pro 2000 schedule will feature 18 races at 10 venues consisting of six road course, two street circuit and two oval events. In support of the 104th Running of the Indianapolis 500, both Indy Pro 2000 and USF2000 will return for the Carb Night Classic on May 22 at Lucas Oil Raceway. Indy Pro 2000 will feature worldwide live streaming on indypro2000.com, indycar.com, Road to Indy TV, the Road to Indy TV App as well as Apple TV, Amazon Fire, Roku and Xbox One.

Indy Pro 2000 test days are scheduled for the Homestead-Miami Speedway road course on March 7/8, Circuit of The Americas on April 23, the Indianapolis Motor Speedway road course on May 7, Lucas Oil Raceway on May 11, the Mid-Ohio Sports Car Course on August 13, World Wide Technology Raceway at Gateway on August 20 and Portland International Raceway on September 3 for a total of eight series tests.