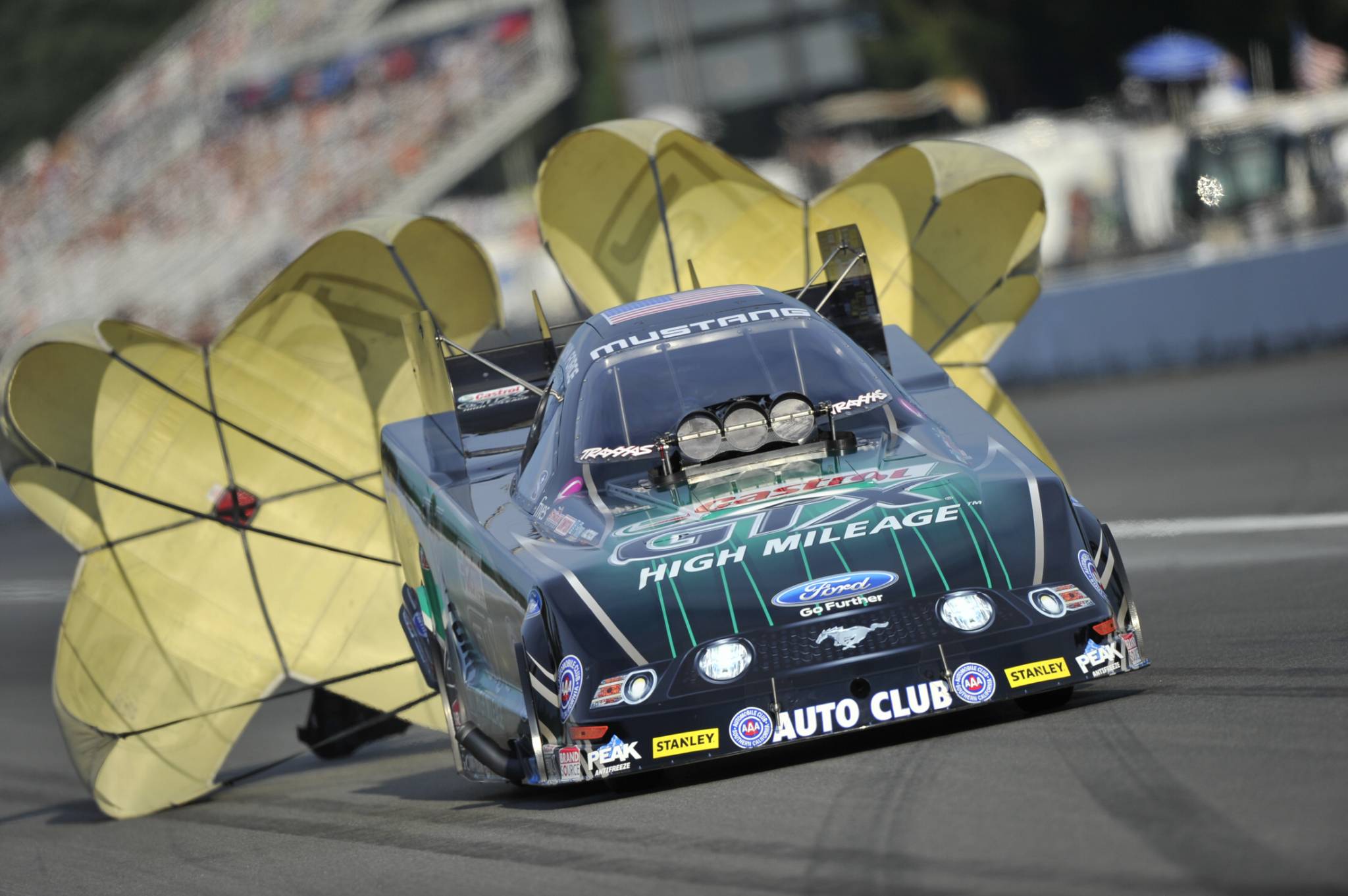 John Force earned his third win of the season by racing to the Funny Car victory Sunday at the O'Reilly Auto Parts NHRA Northwest Nationals at Pacific Raceways.

Force defeated former teammate Gary Densham in the final round for his 141st career win. Force registered a run of 4.173 seconds at 302.48 mph in his Castrol GTX High Mileage Ford Mustang to defeat Densham's trailing Chevy Impala, which lost traction early in the run and finished in 5.808 at 120.44. Force has raced to four consecutive finals and has won twice in that stretch.

"I want to win, that is what it is all about," Force said. "But we were having so much down there in the staging lanes. I know you are supposed to be serious because it is race day but you are racing a friend. He comes up here on a budget. Look how good he does. Steps up and races with these guys after only being out a few times all year and gets in the finals. I always say ‘If I lose to my teammates I didn't lose' and if I had lost to Gary Densham I would not have lost."

Kalitta recorded his second win of the season in Top Fuel, defeating Antron Brown when he powered his Mac Tools dragster to a winning pass of 3.844 at 318.84 to the 3.887 at 311.70 for Brown's . This is the 35th career win for Kalitta, which ties him with Don Garlits for fifth on the all-time Top Fuel wins list.

"I'm real proud of [crew chief] Jim [Oberhofer] and my crew; they've given me a consistent car and I just try to do the best I can do," said Kalitta who also has six runner-up finishes this season. "The competition out here is tough; it's really something to even make it to a final. We've been banging on the door trying to get another win. Beating Antron for this one was big for us. We've just been trying to win rounds but Antron's been winning a lot, too. He's got five wins this year, so I'm glad we were able to get another one here today. We've got some momentum going into the next few races."

Tony Schumacher, who qualified No. 1 was defeated in the semifinals by teammate Brown, but was able to secure his berth in the Countdown to the Championship. He was the only Top Fuel driver to clinch a position in the playoffs at the event.

In Pro Stock, Line ousted teammate Greg Anderson in the finals to claim his third career win at Seattle. Line, in his Summit Racing Equipment Chevy Camaro, defeated Anderson on a holeshot with a run of 6.611 at 210.67 to Anderson's losing effort of 6.608 at 210.54. Anderson, on the strength of his runner-up finish moved into the Top 10 in the Countdown to the Championship point standings for the first time this season. Anderson missed the first five events of 2014 recuperating from open heart surgery.

"It was a very good day for KB Racing," Line said. "We got both cars to the final and Greg got in the top 10. He's not going to look back from there. He's got a great car. I was good when I needed to be today. The car wasn't great, but it was good enough. I guess the racing gods owed me one today. It feels good to get another win. I've never won three races in a row though, so we'll see what happens at Brainerd."