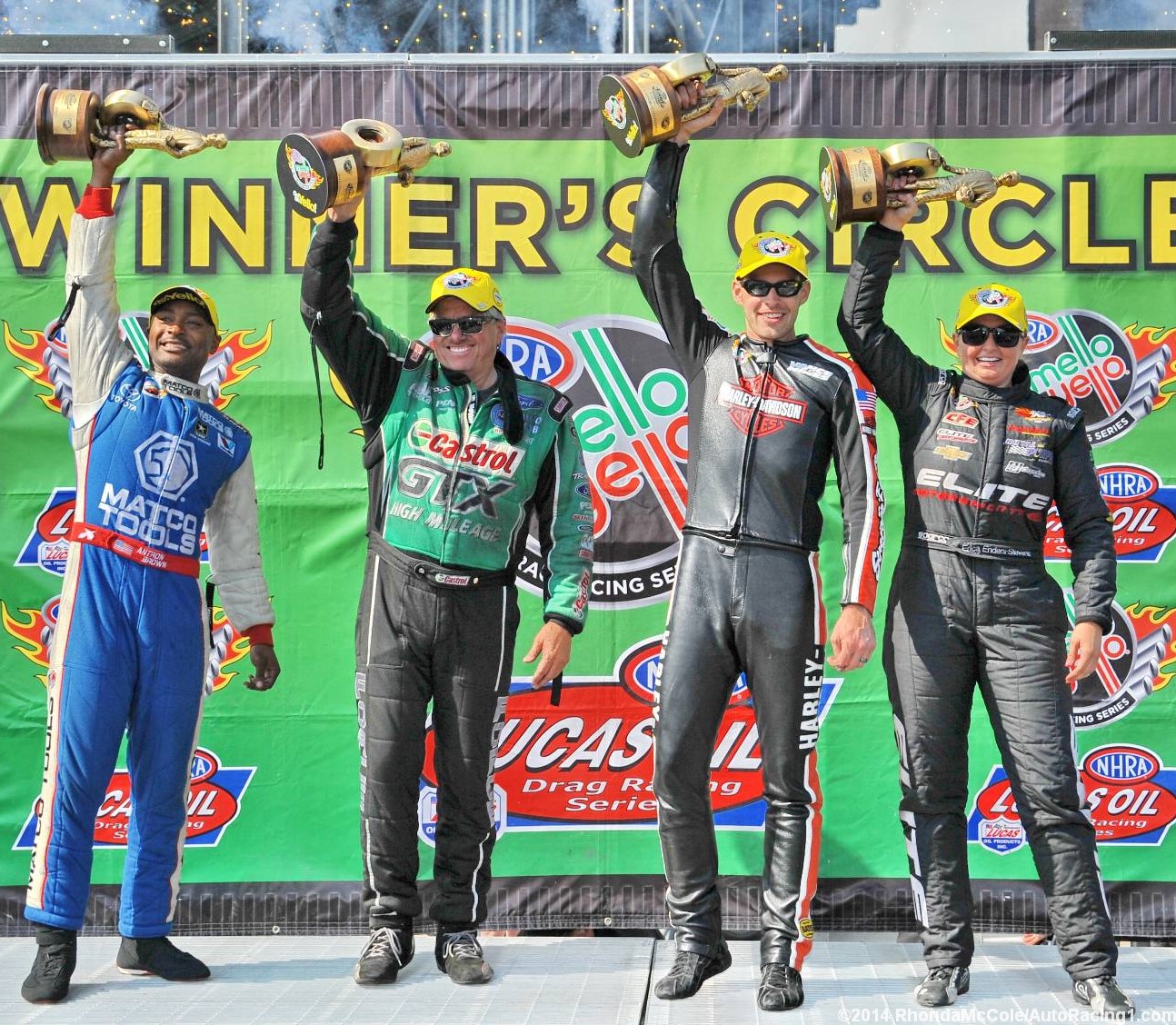 Antron Brown won in the Top Fuel division to pick up his fifth win of the season, while Erica Enders-Stevens swept the weekend in the Pro Stocks. Andrew Hines won out in the Pro Stock Motorcycle bracket.

The victory was Force’s second of the year and his first ever at Norwalk, which has been hosting NHRA events since 2007.

“It was special to me," said Force, who beat out Tim Wilkerson, Chad Head and Cruz Pedregon to reach the finals. “I’ve come to this track for decades. I’ve won here at the Night of Fire races. Robert [Hight] and my daughter Ashley [Force Hood] have won here. I keep coming back here.

“I’ve been real lucky in my career and you want to win them all, but I really wanted this win."

With the win, Force jumps to second in the series points standings over Tommy Johnson, Jr., and now trails points leader Robert Hight by 178 points.

In Top Fuel, defending World Champion Antron Brown kept himself in the hunt for the series points lead with a victory over top qualifier Shawn Langdon for his second victory in a row.

Brown won out over Clay Millican, Steve Torrence and teammate Tony Schumacher to reach his second-straight final round and his third-career final-round matchup against Langdon.

In the final, Brown and Langdon hit nearly identical lights with Langdon taking a slight advantage until his tires went up in smoke just past the tree, giving Brown an easy run to the finish, posting a 3.797 at 318.84.

The victory was Brown’s 46th win overall and his 30th in Top Fuel competition.

“It’s been a true blessing to be out at this racetrack this weekend," said Brown. “The Bader family really put on a great show. The racetrack was great all weekend long. We got some cloud cover today. When four cars can run 3.75 in the first round with other cars across the board at .76, .77, that shows you how competitive the Top Fuel class is right now. It’s crazy tough to win a round right now, let alone a race."

Brown still trails Doug Kalitta in the Top Fuel points standings but shaved 54 points out of Kalitta lead and is now just 48 points back.

In Pro Stock, Erica Enders-Stevens took the boys to school with a dominating performance capped with a win over Dave Connolly in the final round to collect her fourth Wally of the season and 10th of her career, and increase her points lead in the Pro Stock standings.

Coming into Sunday’s eliminations as the top qualifier after setting both the track speed and ET records, Enders-Stevens took down Travis Mazza, Jonathan Gray and Chris McGaha, posting the low ET in each of the first three rounds before moving on to face Connolly, who once served as Enders-Stevens crew chief.

“You can’t think about any of the negative things when you get into a 215-mph race car and I was able to do that today," Enders-Stevens said. “At the end of the day we came out on top and that’s all that matters."

Enders-Stevens added to her points lead by 51 points over Allen Johnson, who moved past Jeg Coughlin into second in the points standing, 241 points behind Enders-Stevens.

Three-time Pro Stock Motorcycle champion Andrew Hines won his third event of the season in a thrilling back-and-forth race over Hector Arana to hold onto his lead in the series points standings.

“It was a lot of little things that needed to fall into place to finally come around today," said Hines, who is now a perfect 4-0 in final rounds at Norwalk. “Without the help of everybody on the crew, we wouldn’t been able to get where we are. We struggled in the semis. But I was able to outrun Hector and to get around him was big. The fourth win light was definitely the prettiest one of the day."

Hines added 48 points to his advantage over teammate Eddie Krawiec, who now trails by 69 points.