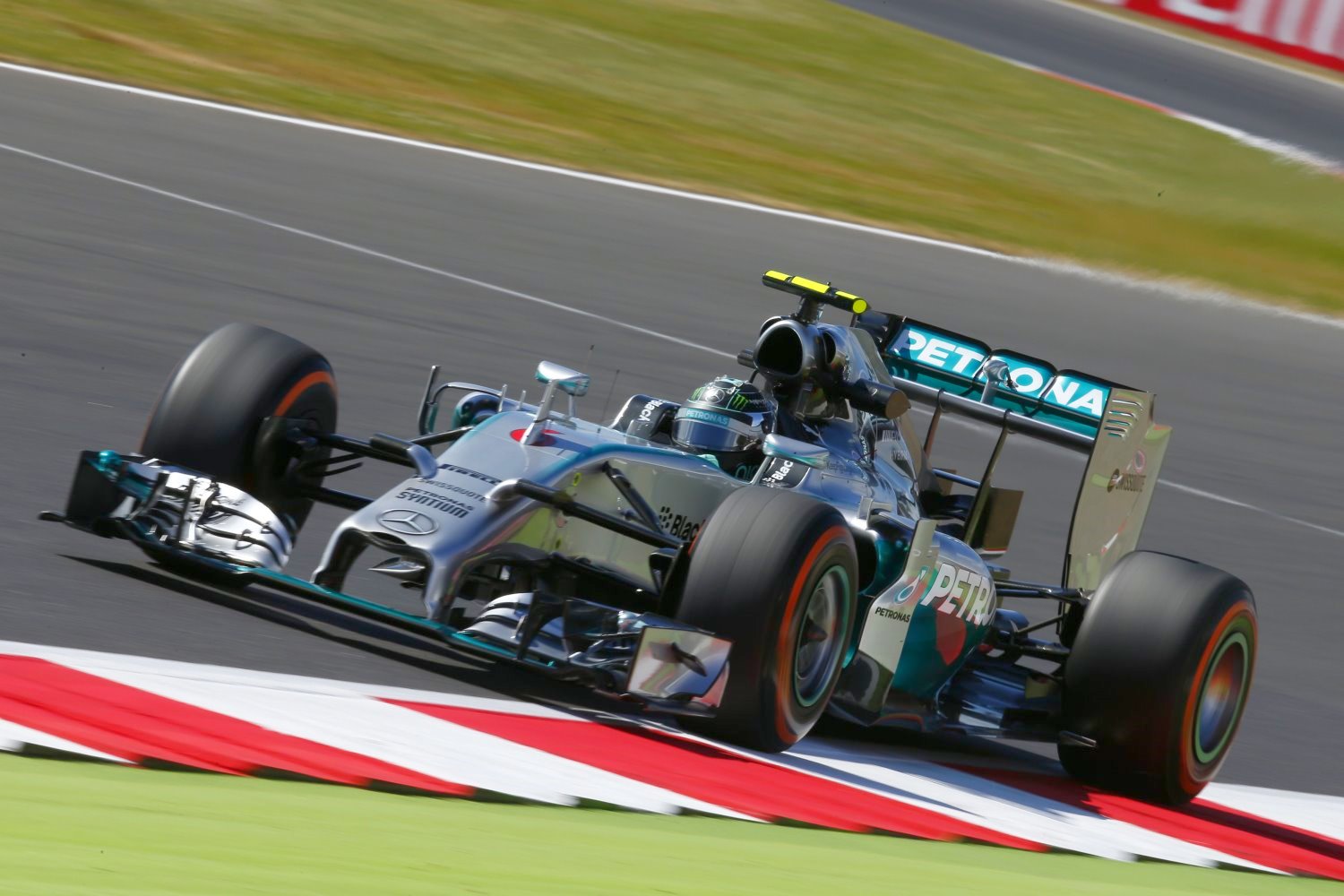 On Saturday at Silverstone, Nico Rosberg totally deflated Lewis Hamilton's boastful ego by burying him in qualifying for the British GP on a partially wet Silverstone circuit in his 80 HP advantage Mercedes while Hamilton could only manage 6th best in identical equipment.

Just this past week Hamilton said he was better than Rosberg. Rosberg had a point to make and he made it, driving a nail right through Hamilton's inflated ego.

Sebastian Vettel will start 2nd for Red Bull with Jenson Button delighting the partisan British crowd with a 3rd in his McLaren, also with a 80HP advantage.

Nico Rosberg said, "Wow, what a qualifying. It was so tricky out there this afternoon with the rain and the conditions changing so quickly. It's very satisfying to get everything right in these conditions and be able to come out on top. Thanks to the team today for guiding me through the hour so well. My last flying lap was difficult because we were very tight for time and I was stuck right up behind Lewis. Luckily he didn't finish his lap but I remembered that we were losing three or four seconds in the last corners when it was very wet so there was an opportunity to make a real improvement and that I should keep going. It's a great opportunity to start the race from pole and I'll give it everything to take the win tomorrow."

Driving to save his job, Kimi Raikkonen was 4th for Ferrari.

With rain coming and going throughout the qualifying hour, the drivers had to use all their skill to keep the car on the track.

But conditions had dramatically improved by the final seconds of qualifying as drivers attempted their second runs and with Hamilton abandoning his run after saying it was too slippery, he tumbled down the order to 6th.

Rosberg's pole lap was 1.6s faster than second-placed Sebastian Vettel, which is what you get 80 extra HP.

Jenson Button was third fastest ahead of the Force India of Nico Hulkenberg, the German briefly taking top spot after being the first to improve on the second runs.

Lewis Hamilton admitted his mistake for the 2nd race in a row. "I made a mistake today and pulled out of the lap when I should have kept going. It was a tough qualifying with the changing conditions and we got through most of it really well, until the most important part. It was my decision, a bad call, and that decided my qualifying. I'm so sorry to have disappointed the fans here today as their support has been fantastic and I'll do what I can to have a great race for them tomorrow. I need to have a start like I had in Austria two weeks ago and then do my best to get back to the front; you never know what might happen. It's difficult when you're just out of the car to express your emotions and see the positive but I'll go back to the team and my family now and we'll build up for tomorrow from there."