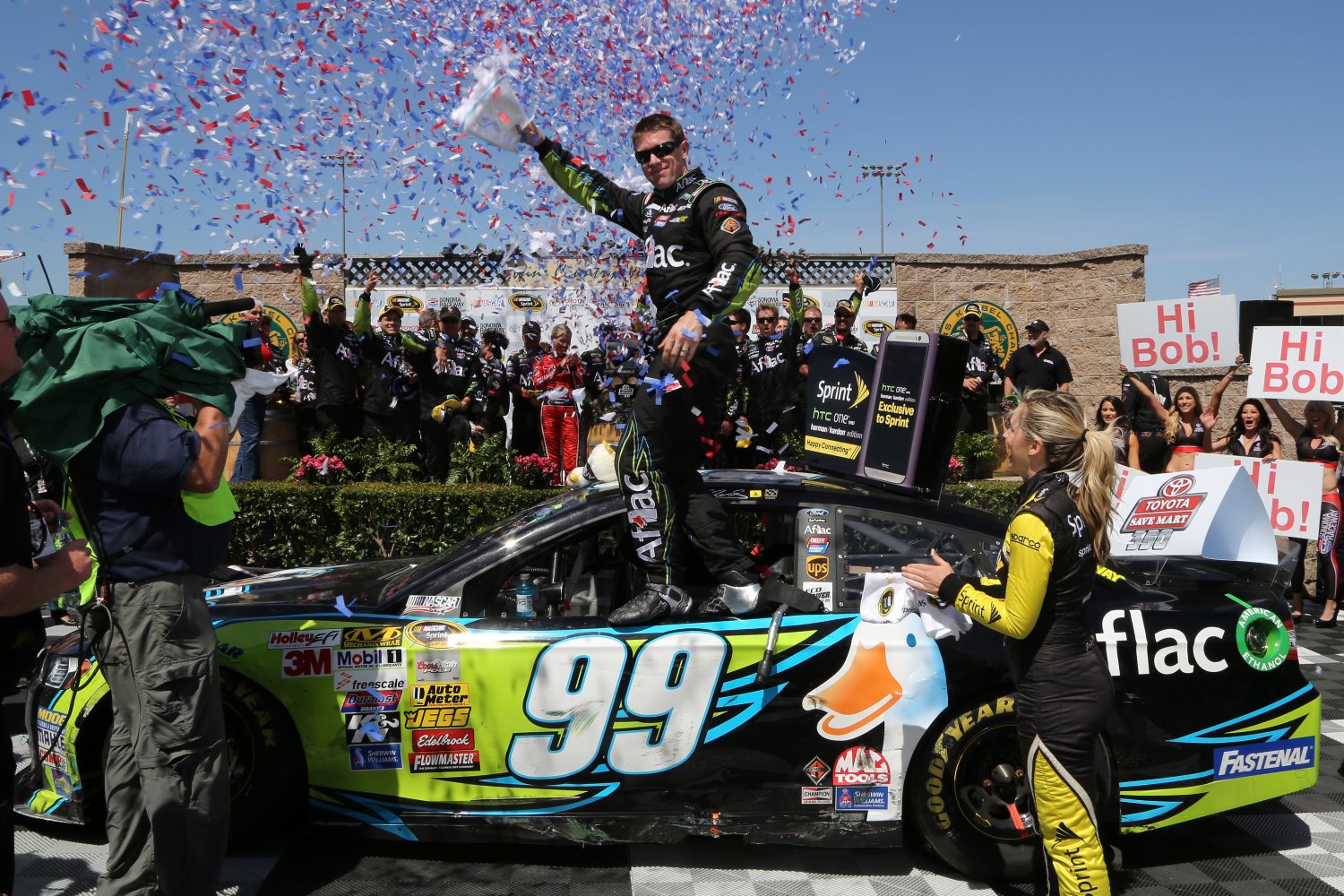 Carl Edwards won the Toyota/Save Mart 350 at Sonoma Raceway on Sunday, marking the first road course victory of his career.

Edwards, who led 26 laps, became the fifth multi-race winner of 2014; he also won at Bristol in March. Edwards now has 23 Sprint Cup Series wins in his career.

Edwards held off a fast charging Jeff Gordon by 0.592 seconds who needed just one more lap to blows the doors off that Ford. It would have been no contest. Dale Earnhardt Jr., Jamie McMurray and Paul Menard rounded out the top five.

JEFF GORDON, YOU SAID YOU MADE ONE MISTAKE ON THAT LAST LAP THAT COST YOU THE WIN, AND YOU NEEDED ONE MORE LAP. WHAT WAS THAT?
“Well, it was actually maybe five or six laps to go. I was making some ground up on (race winner) Carl (Edwards). I was good in the fast sections and he was pretty good in the slow sections. So, I was having to hit everything so perfect. And I just overdrove it into (Turn) 4 one time and went real wide off and that gave him enough of a gap that I had to close it back in and I just couldn’t put enough pressure on him. And I think had I put some more pressure on him; I saw him really struggling with the grip level. He drove a clean race and he did everything you need to do.

"But of course, on that last lap, I gave it my best effort and closed up on him, but I just drove into (Turn) 11 as hard as I could. We weren’t good in 11 anyway. He didn’t overdrive it. I was hoping he might slide up and I’d get a run underneath him. But all in all, it was a great weekend for this Panasonic Chevy and I could have been more proud of the calls made and everything the team did. We didn’t qualify good, but we had a great car in the race."

CARL EDWARDS SAID IT WAS AN HONOR TO BEAT YOU BECAUSE HE GREW UP WATCHING YOU WIN HERE
“Yeah, I’m starting to hear that a lot more where somebody was born when I won my first championship or was watching me as a kit. But I love racing here. I love being competitive and leading the points and having a shot at winning races, at 22 years into my Cup career. It doesn’t matter; we’re having fun."

DID YOU THINK YOU HAD A WAY AROUND CARL EDWARDS ON THAT LAST TURN?
"On that move, you just want to make the guy overdrive the corner, because if you miss the bottom down there, there is a real opportunity for someone to get inside of you. Carl (Edwards, race winner) was driving a really good race, and the tires were definitely falling off bad. So were mine. At that point, I was just trying to keep the wheel spin to a minimum, and see if I could inch up on him every little bit. Those last couple of laps I really did. I made one mistake with about six (laps) to go where I overdrove – maybe five to go – where I overdrove (turn) four. I really think that was the difference. I think if I could have got to him, I probably would have had him. But, he was better in the slower sections; I was better in the faster sections. I would have liked to have a little bit closer shot at him going into (turn) 11 on that last lap. Can't thank Panasonic Tough Book enough. Great having them on board. What a great way to finish this weekend out with a second place finish. Congrats to Carl. He did a great job."

AJ Allmendinger started second and led a race-high 35 laps but finished 37th. Kevin Harvick, who led 23 laps, was knocked out of contention on the Lap 81 when Clint Bowyer spun out and Harvick slammed into him. Harvick placed 20th.

DALE EARNHARDT, JR., NO. 88 KELLEY BLUE BOOK CHEVROLET SS – FINISHED 3RD
WHAT STANDS OUT TO YOU THE MOST ABOUT YOUR RACE TODAY?
“Just putting the tires on and getting the strategy right. I told Steve (Letarte, crew chief) the secret of being a great crew chief is calling every year like it’s your last because he’s had the best strategy every week. The Kelley Blue Book Chevy was fast all weekend, really. And I tried to screw it up there a couple of times in the race but calmed down and was able to get a good finish out of it.

“I got into Matt (Kenseth) and jumped that curb and just jumped in there and ran into him. It was totally my fault. It’s kind of like what happened to him last year at Watkins Glen. Just racing a little too hard through there with him and probably should have let him have the spot. Other than that, we had a pretty good day. We’ll cut the shell of this thing and put it in the woods and go to Watkins Glen."

ON HIS RACE:
"I am sick at my stomach getting into Matt (Kenseth) there. I just hopped that curb, and it threw me right into him. I shouldn't have been running him hard I guess, I just got up on that curb and it just launched me over into the side of his car. I really hope he isn't hurt too bad. I'm proud of my team. Kelly Blue Book sponsored this race. We had a fast car all weekend. The guys did a good job on the strategy, and gave me great tires at the end so I could be on the offense. Proud of Steve (Letarte); the whole job the team did. The car was fast all weekend. It was a lot of fun.

JAMIE MCMURRAY, NO. 1 CESSNA CHEVROLET SS – FINISHED 4TH
YOU WERE ABLE TO KEEP IT IN THE TOP 5, TOP 10 ALL DAY LONG AND HAD A VERY CONSISTENT DAY
“I’m happy that I’m mad that I finished fourth, if that makes any sense. I thought I had a chance to win but when the last caution came out I was working Carl (Edwards) there a little bit, and I was just waiting on him to make a mistake. I felt like I was better than he was. And when we went back green, after the caution, I just used up too much car in (Turns) 1 and 2 and spun the tires really bad and paid the penalty for that the remainder of the run. But it was a really good day. Our pit crew did a really good job. We had a huge group of people with Cessna here today. So, overall, I’m mad that we finished fourth, but we had a great weekend."

WHEN DALE JUNIOR CAME BY, WERE YOU LIKE MAN, TIRES DID MAKE A BIG DIFFERENCE, DIDN’T THEY?
“Well, I could see how fast he was catching me and I came on the radio and I’m like, is he on a different strategy than we are? And it was like, yeah. So, when he caught me, I didn’t really put up a fight because I knew that he was going to get by. I was more worried about the No. 27 (Paul Menard). He was another ten seconds back, if he was going to be able to catch me at the end. It was a good race. I thought they had a great tire because it gave up a lot. And putting new tires on made a huge difference and it made it a lot of fun to pass."

ON HIS RACE:
"We had a really good car. Before the last caution, I thought I was going to be able to work Carl (Edwards – race winner) over. He was struggling and I really did not have to drive that hard to keep up with him. I'm like 'Well, I let him use his car up, and then I will get him when he starts sliding around'. But, then the next caution came out and we took off – it was like he had my car and I had his all of a sudden. I just couldn't make it happen. But we had a good day, we qualified well. Really solid weekend. The guys did a good job on pit road. We were close, just didn't have enough."

PAUL MENARD, NO. 27 RICHMOND/MENARDS CHEVROLET SS – FINISHED 5TH
ON HIS RACE:
"It was a good day. We unloaded fast on Friday, and we qualified ninth. We were disappointed with ninth actually. We felt like we had a little bit better car than that actually. The first run was pretty brutal actually. We got really loose, and the guys tightened it up with some air pressure, and we got a lot better. From then on, we were a 10th place car probably and then drove up to top-five with tires."

KASEY KAHNE, NO. 5 GREAT CLIPS CHEVROLET SS – FINISHED 6TH
ON HIS DAY:
“We had a fast car from the start. Our Great Clips Chevy was good. I could pass cars early just a little bit, but definitely after like five laps I felt really good and competitive. Then we started hurting the car. We just didn’t have track position after that. We fell back and luckily we got back to sixth. We easily had a top-five car. I don’t know how good it was definitely better than that. I had a great car today."

JIMMIE JOHNSON, NO. 48 LOWE’S CHEVROLET SS – FINISHED 7TH
“Had a great car just got drilled by the No. 14 (Tony Stewart) and my steering was off from there. We had a great car and the guys with fresher tires got us at the end."

KEVIN HARVICK, NO. 4 OUTBACK/BUDWEISER FOLDS OF HONOR CHEVROLET SS – FINISHED 20TH
“Today was just another day with the fastest car. We had a chance to win the race and kind of flubbed it up again. Just got ourselves bad track position and crashed."

AJ ALLMENDINGER, NO. 47 KINGSFORD/CLOROX CHEVROLET SS – FINISHED 37TH
“We led a lot of laps today and we were good enough to win the thing no doubt. It's just disappointing the way our day ended and to leave Sonoma with a car that's tore up. I'm proud of my guys and all the hard work they put into this weekend. It's just tough. We were hoping to bring home a win today for Kingsford and all our partners."