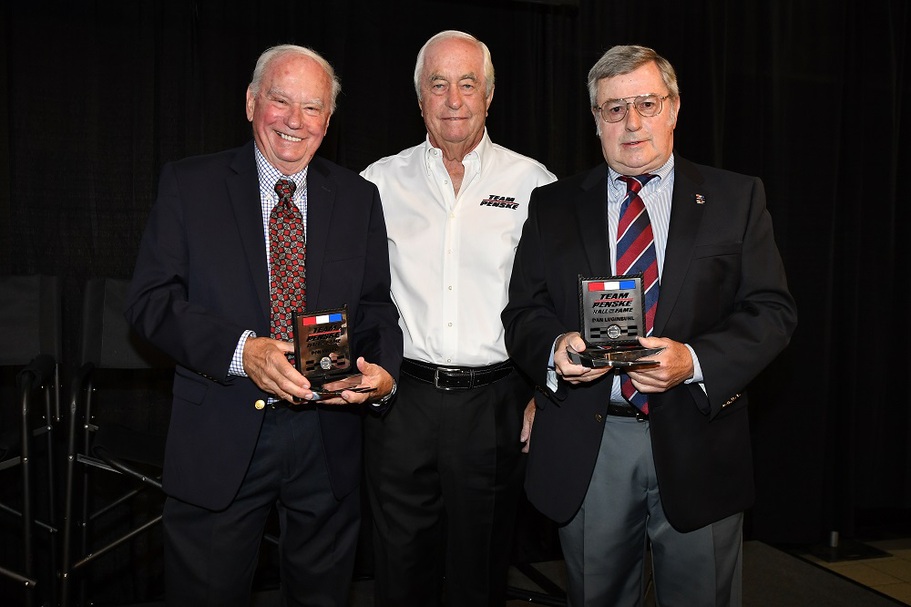 Team Penske inducted two long-time team leaders and executives into the Team Penske Hall of Fame this morning, as former Penske Racing South President Don Miller and Dan Luginbuhl, one of the pioneers of motorsports marketing and public relations, were honored in a special ceremony at the team’s Mooresville, North Carolina facility.

Miller met team owner Roger Penske in the early 1970s during his time as a sales manager for National Engines and Parts, Co. in St. Louis. Miller joined Penske Racing in 1972, working on the team’s stock car and IndyCar programs. A former racer himself, Miller brought a wide range of experience to the team and he worked in many capacities on his way to becoming Vice President of Penske Products.

Miller was instrumental in bringing Penske Racing back into full-time NASCAR competition in 1991 with driver and fellow Team Penske Hall of Famer Rusty Wallace. Miller then became President of Penske Racing South, overseeing the day-to-day operations of the team’s stock car program. Under Miller’s leadership, Penske stock car teams produced a total of 69 victories in NASCAR Cup Series, NASCAR Xfinity Series and ARCA competition until his retirement in 2007. The Chicago native was also an innovator in the sport, helping to design and develop several car safety advancements in NASCAR while leading the Penske team.

“When I first started at Team Penske there were 29 of us," said Miller. “The population has grown significantly since then, but there is no place I’d rather be. I always tried to do the very best, not only for this team, but for Mr. Penske. When you are a member of this team, he will always have your back. I really appreciate this award. I am honored to be a part of this organization and the Team Penske Hall of Fame."

When Luginbuhl joined Penske Racing in 1969, he helped chart the course for the team’s innovative and successful partnership model. He also helped pioneer modern motorsports public relations and marketing. Early in his tenure with Penske Racing, Luginbuhl cultivated the relationship with key team sponsor Sunoco, before he helped foster partnerships with some of the other top brands in motorsports including Pennzoil, Marlboro, Miller, Goodyear, Mobil, Mercedes-Benz and many other Fortune 500 companies.

Under his guiding hand, Team Penske became the industry leader in American motorsports media relations, sponsorship and hospitality – a standard that continues today. Over his 35-year career with Team Penske, Luginbuhl distinguished himself in numerous roles within the organization as he helped define and refine the Penske brand. He served as Vice President of Communications when he retired in 2002 and he continues to be a valued resource for Team Penske.

“I am very honored to receive this special honor. And I am humbled to be in the company of some amazing people," said Luginbuhl. “It’s been my privilege to work with many a great people over the years. We have come a long way since 1969 and our team of 10 working at the four-bay truck garage in Pennsylvania. But the mission today is still the same – work together, get the job done, keep building the Penske brand worldwide and of course, ‘effort equals results.’"

Inductions into the Team Penske Hall of Fame occur annually. Each year, two inductees are chosen from current and former drivers, employees and partners that have made a significant impact on the team and its history. The Hall of Fame class members are honored both at an event and within the walls of the Team Penske facility in Mooresville, NC.