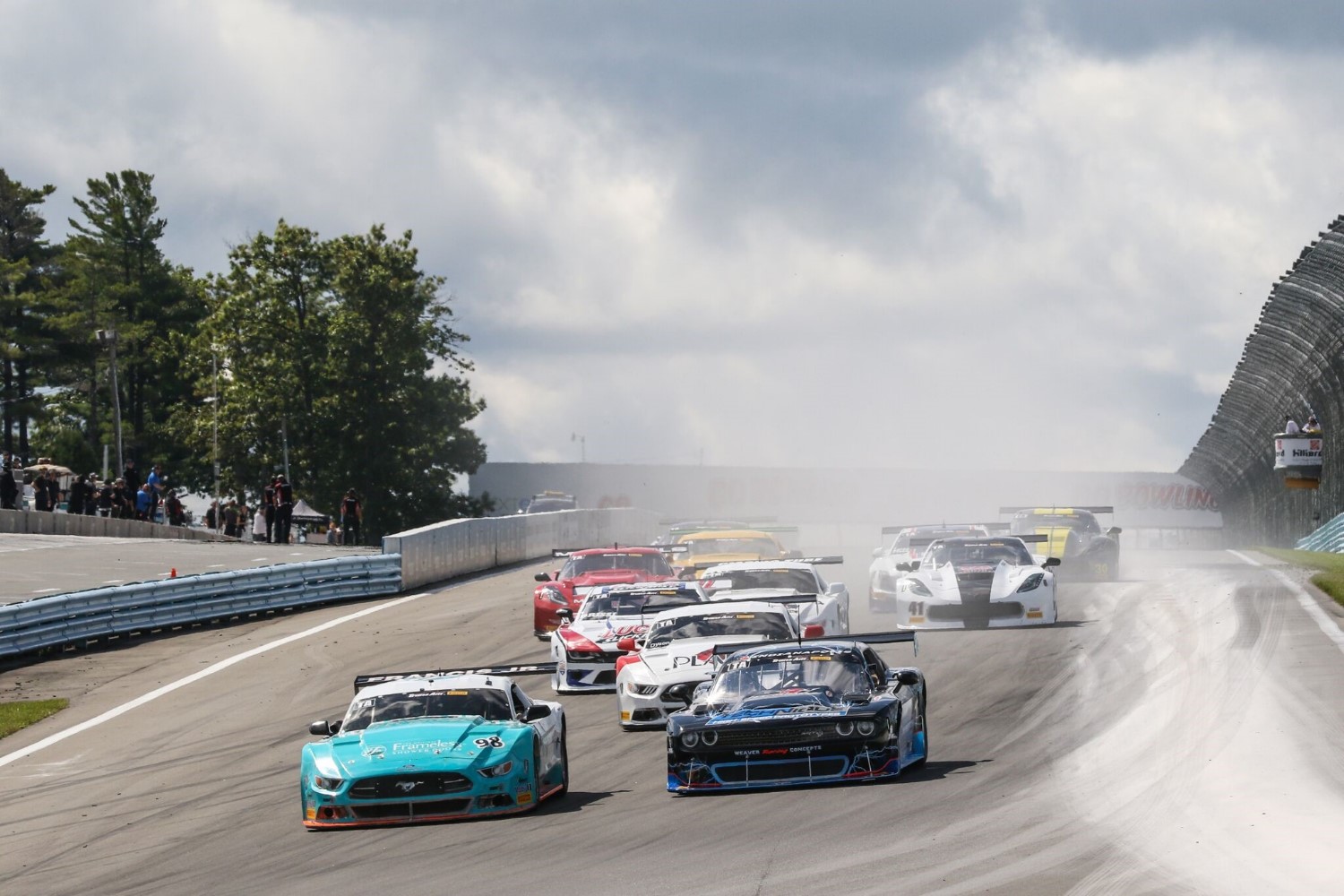 The monstrous roar of the 850 horsepower Trans Am presented by Pirelli TA class echoed around the iconic Watkins Glen International road circuit and had fans on their feet on Sunday as Ernie Francis Jr. dominated the entire 100-mile feature.

“This weekend went as good as it could have went," Francis Jr. said. “Last year and the year before we had a DNF, so to go out here and get a clean sweep of the weekend, leading all the sessions, getting pole in qualifying and finishing the race in first was great. I’m looking forward to the next race at VIR."

Starting on pole, Francis Jr. steadily distance himself from the field, leading by more than 11 seconds before the only full course yellow of the race regrouped the field. On the restart, it looked like Dyson might have had something for Francis, but the New York native’s speed faded as he also had to shake Drissi, who was stuck to his bumper.

“I was fighting the car more than I was fighting with Tomy, I was just too loose around here today," said Dyson. “I had a glimmer of hope on the restart, but Ernie had a great restart and we just couldn’t match his pace. I had Tomy in my mirrors and we had a good battle. We will regroup and be back in a couple week’s time at VIR."

Drissi returned from medical leave, sporting a newly wrapped Slick Mist livery. Starting in the second row in fourth place, Drissi moved up a position to run nose-to-tail with Dyson for the second half of the race to finish third.

“It was pretty tough for me not being here," Drissi said. “I pleaded with the doctor, giving him some pretty ridiculous excuses to get back in the car. Ernie did a fantastic job. Dyson didn’t make any mistakes and I couldn’t get by him. Burtin Racing- you guys are great. I’m glad to be back."

“We felt good on the start, went around, had some mechanical issues that I didn’t think would clear up, so I decided to park it early to save what I could," Ruman said. “We made some adjustments from qualifying that I thought would have worked in the right direction, but unfortunately I didn’t have a lot of time to test them out.

“This was really the first run for the No. 2 Dodge," Said commented. “I really thought on the first lap that we had something for Ernie, and I was pretty confident after Lap 2 that I was going to be able to get him, but unfortunately it let us down."

Adam Andretti only had to take the green in the No. 17 Engineered Components Company/Anchor Bolt Chevrolet Corvette to clinch the Trans Am Northern Cup title.

Following a great start, Andretti broke a shift linkage in Lap 2 which forced him to the pits for the duration of the race. However, he accomplished what he came to The Glen to do, take the Trans Am Northern Cup Championship.

“We’ve had a trial and tribulated weekend, and we knew that coming in," said Andretti. “We had some metal in the oil and didn’t know how long the motor would last during the race, but knew it wouldn’t be anything catastrophic so we started. We had a good run until the shift linkage snapped. Our whole objective was to seal up the Trans Am Northern Cup Championship. If we didn’t have that to focus on, we would have ran all the sessions, and would have found a simple gremlin like that."

Veteran driver Simon Gregg missed Round 8 of competition to be with family.

Eleven SGT-class cars took the green with Aaron Pierce going flag to flag for his first victory of the season in the SGT category. SGT championship leader Mark Boden (No. 46 Beverage Flavors International Porche 991 GT3 Cup) finished second. Tom Herb in the No. 16 Fall-Line Motorsports Porsche 991 GT3 Cup edged out Adrian Wlostowski in the No. 96 F.A.S.T. Auto Ford Mustang on the final lap on his way to a third-place finish.

Pierce in the No. 26 Sam Pierce Chevrolet/Logical Systems Inc. Chevrolet Corvette is a veteran of racing winged sprint cars, and had to adjust quickly to the Watkins Glen road course.

“The team has come a long way since we’ve started," Pierce said. “They’ve busted their butts on this race car. We’ve ran well everywhere we’ve been to. I’ve not been to most of the tracks, and it took me some time to adjust to this track since it’s my first time here. Things got a bit hairy on the straight but we pulled it together and had a lot of fun doing it."

Milton Grant in the No. 55 Sentry Self Storage/Fairfield Inn Porsche 991.3 GT3 Cup received the Masters Award after finishing sixth in the SGT class.

Steven Davison in the No. 22 Davinci Plastic Surgery Aston Martin Vantage wheeled his way to another victory in the GT class.

“This was a personal best race for me in terms of time," said Davison. “Last year I smashed myself into the Esses. It was clean racing from all the SGT guys and a privilege to run with Trans Am."

The Cool Shirt Cool Move of the Race was awarded to Vincent Allegretta in the No. 41 TA Sights and Sounds Chevrolet Corvette.

The Trans Am Series presented by Pirelli returns to action at Virginia International Raceway Sept. 20-21.