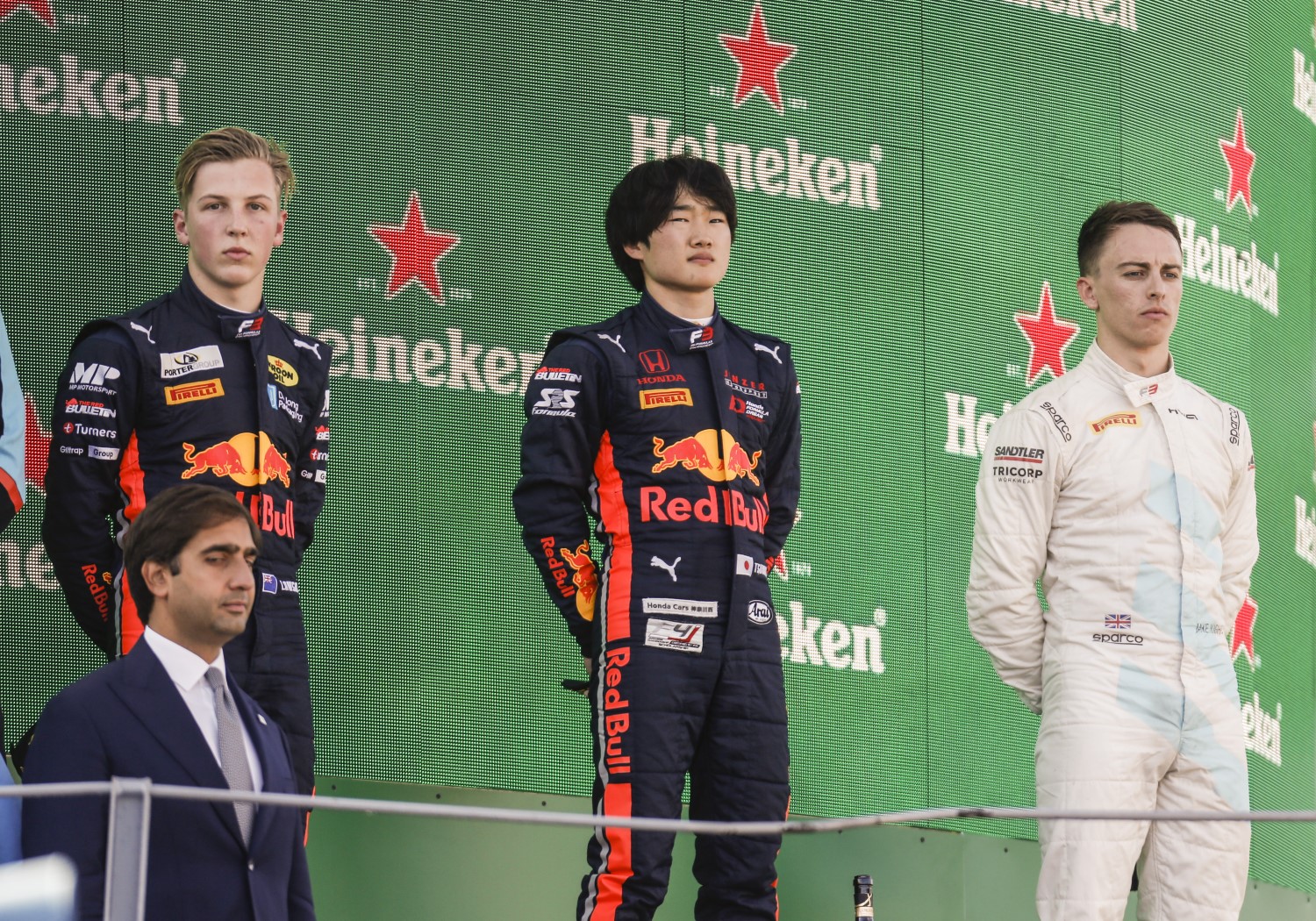 Yuki Tsunoda completed his remarkable upturn of form in Monza, with his, and his team’s first ever win in the FIA Formula 3 Championship. The Jenzer Motorsport driver romped to a third podium in as many races, after a lengthy battle with Jake Hughes, which ended in him finishing ahead of Liam Lawson in second and the HWA RACELAB driver in third.

The Japanese driver’s victory marked a successful weekend for Honda Dream drivers, matching his F2 counterpart Nobuharu Matsushita, who won in yesterday’s Feature Race. The feat earns him his seventh points’ finish in a row, having scored just two of them in the first seven of the campaign.

The track was damp from overnight showers and the cars started against a shower of spray, but this didn’t stop Jake Hughes from bolting off the line, as the HWA RACELAB man lunged down the left of polesitter Fabio Scherer and into the lead. Behind him, Tsunoda had started his march from sixth and leapt to third at the first turn.

The Japanese driver pulled off a similar move for second on the next tour of the track. He had Hughes in his sights, but the duo both went wide at Turn 4 as they battled with the greasy track surface. They then collided at the following corner, as Tsunoda’s front wing scraped the back of Hughes’ rear tire, but luckily they avoided any damage.

Former leader Scherer was struggling to keep Lawson at bay behind him, as the Kiwi eyed his second podium of the season. Less than a second separated the Swiss driver in third, with Leonardo Pulcini in sixth. Space opened up down the side of Scherer and the Red Bull F1 junior took a tow and slipstreamed down the right of him.

Hughes and Tsunoda had begun to pull away from those behind them, collecting a 3s gap, but the battle between the two remained on-going. The Jenzer driver got close enough to gain the advantage of DRS and flashed past the Brit for the lead.

Hughes fought back and went side-by-side with Tsunoda around the outside of Parabolica, but the Japanese driver out-braked him and retained P1. Their drawn out fight for first handed Lawson a shot at P2 and the MP Motorsport man began to attack the back of Hughes. The duo went side-by-side down the pit straight, and with the aid of DRS, and the inside line, the Kiwi completed the move and made it stick at Turn 1.

Tsunoda ran home cleanly at the checkered flag and was followed by Lawson and Hughes in the top three, as Richard Verschoor and Pedro Piquet completed the front five. The final points’ positions went to Pulcini, Scherer and Robert Shwartzman.

The Russian’s P8 finish hands him an extra point in the Championship and marginally stretches his lead to 33 points, ahead of Jehan Daruvala on 147 points. Juri Vips remains third on 122 and Marcus Armstrong on 119. In the Teams’ standings, Champions PREMA Racing lead with 446, ahead of Hitech Grand Prix on 188, ART Grand Prix on 174, Trident on 105 and HWA RACELAB on 84.

Shwartzman holds the cards heading into the season finale, at his home race in Sochi, Russia, at the end of September.

The Honda Formula Dream Project driver was the man of the weekend, especially considering that it was his first time at the classic venue and the variety of conditions thrown at him.

“Yeah, obviously I am happy, a good weekend, a lucky weekend," he smiled. “Honestly I am quite surprised to get the win, my first time in Monza. Early in the weekend it did not go so well, I struggled in difficult wet conditions early on and we had changeable conditions all weekend, it was very difficult."

“In Race 2 I got a really good start and passed three cars off the line. That helped a lot. I kept pushing and got into P1 but I also knew I had to manage the tires as the track would be drying and I needed to keep something for the end."

“Also in Race 1 I made a good start but then I lost one position before Turn 2. I managed the tires, overtook when I could and also I was a bit lucky with cars ahead, two got punctures but still it was a good race."

“I am happy that I gained experience and was driving consistently as well as getting my first win. I know that there are still things to improve on certainly, still qualifying must be better. Thanks to the team for a great car and I am happy that we got the win," concluded the Jenzer Motorsport driver.