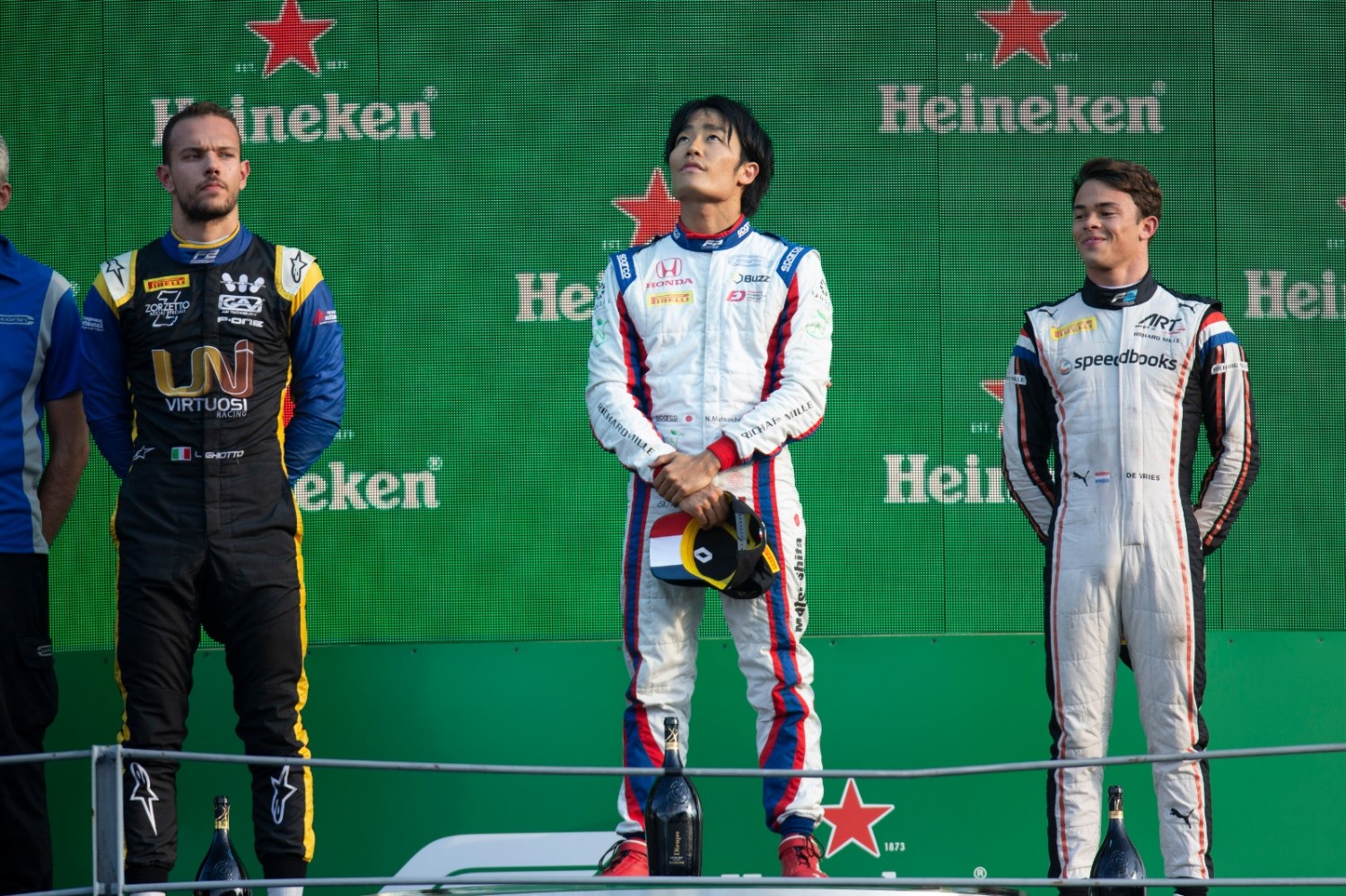 Nobuharu Matsushita claimed his second FIA Formula 2 win of the season, in an overtake fueled Feature Race at Monza. The Japanese driver rose from fifth on the grid and eventually finished 7s ahead of home hero Luca Ghiotto, and Championship leader Nyck de Vries, who completed a sensational drive from last place.

It was an emotional afternoon for the F2 field and each car adorned touching tributes to the late Anthoine Hubert who tragically passed in last weekend’s race at Spa and Juan Manuel Correa who was injured in the horrific collision. The entire Formula 2 family was Racing for Anthoine, and race winner Matsushita later dedicated his win to the Frenchman.

Correa’s teammate Callum Ilott started on pole for the first time in his career and cleanly got away off the line, fending off a challenge from fellow rookie Guanyu Zhou. The third of the three rookie frontrunners wasn’t as lucky: Nikita Mazepin struggled at the entry to Turn 1 and went wide, which dragged him down the order.

Zhou suffered the same fate as his Russian rival a lap later, going wide at the tricky Turn 1 which threw him down to fifth. Behind him, Louis Deletraz spun on the same corner which ended his race, and De Vries went wide as well.

The struggles of those in front of him had handed Matsushita second, with the Carlin driver perfectly maneuvering the corner and setting the fastest lap behind race leader Ilott. The Japanese began to hone in on the Brit and by lap 5, he was within DRS range. The duo went side-by-side down the pit straight and the Sauber Junior Team by Charouz racer clung on by the skin of his teeth. Matsushita was unrelenting and eventually forced himself ahead of Ilott, who couldn’t fight off the DRS enthused Carlin any longer.

Further back, Ghiotto had fired past his teammate as those on the soft tire began to feed into the pits. Matsushita was amongst those on the prime stint to pit last and returned sixth, narrowly ahead of Ilott in seventh. The lead was handed to Ghiotto who was on the alternate strategy.

The Italian had 30s on Matsushita – who was running fresher tires – and was pushing his UNI-Virtuosi machine to the limit of its powers, in an attempt to stretch the gap even further. Behind them, a coming together between Nicholas Latifi and Zhou left the latter with a puncture to his rear right tire and he was eventually forced to retire from the pits. Latifi pitted for a new front wing, which dumped him to last.

Ghiotto eventually pitted with a 20s buffer between himself and Matsushita, but a slow stop from his UNI-Virtuosi team dropped him down to seventh and wounded his dreams of a home victory – not that he would let that stop him trying.

As the rest of the cars on the alternate strategy began to pit, Matsushita took the race lead and began to put air between himself and Ilott. De Vries passed Sergio Sette Camara for third, with a 3s deficit to close for P2. He quickly set to work and within two laps had swept passed the Ferrari F1 junior down the pit straight.

Despite his troublesome pit stop, Ghiotto had somehow managed to force his way back to third, having followed De Vries past Ilott a lap later. The Italian had the fresher tires of the two and added another scalp to his growing list of overtakes, thundering past the Dutchman to the tune of a roaring Italian crowd. With just a lap remaining, there was too much ground to cover for first, leaving the Italian wondering what might have been.

Sette Camara scrambled past Ilott on the final lap for fourth, before Matsushita crossed the line for first. He was followed by Ghiotto and De Vries, who completed the podium. At the request of the drivers, the French national anthem was played during the podium celebrations in honor of Hubert.

Sette Camara and Ilott were fourth and fifth, but the Brazilian was handed a 5s time penalty for gaining track advantage earlier in the race which resulted in Ilott classifying ahead of Sette Camara. Jordan King finished sixth ahead of Giuliano Alesi, who scored his best finish in F2. Jack Aitken, Sean Gelael and Mahaveer Raghunathan – who also scored his highest finish – were the final men in the points’ positions.

With Latifi out of the points, De Vries stretches his Championship lead to 49 points with yet another podium finish. The Canadian follows in second on 166, ahead of Ghiotto on 155 and Sette Camara on 151. Aitken completes the top five with 138. In the Teams’ Championship, DAMS lead the Championship with 317 points, ahead of UNI-Virtuosi on 262 and ART Grand Prix on 221. Carlin are fourth with 170 and Campos Racing fifth with 168.

Jack Aitken will start on reverse grid pole ahead of Alesi and King for tomorrow’s Sprint Race, at 10.50am local time.