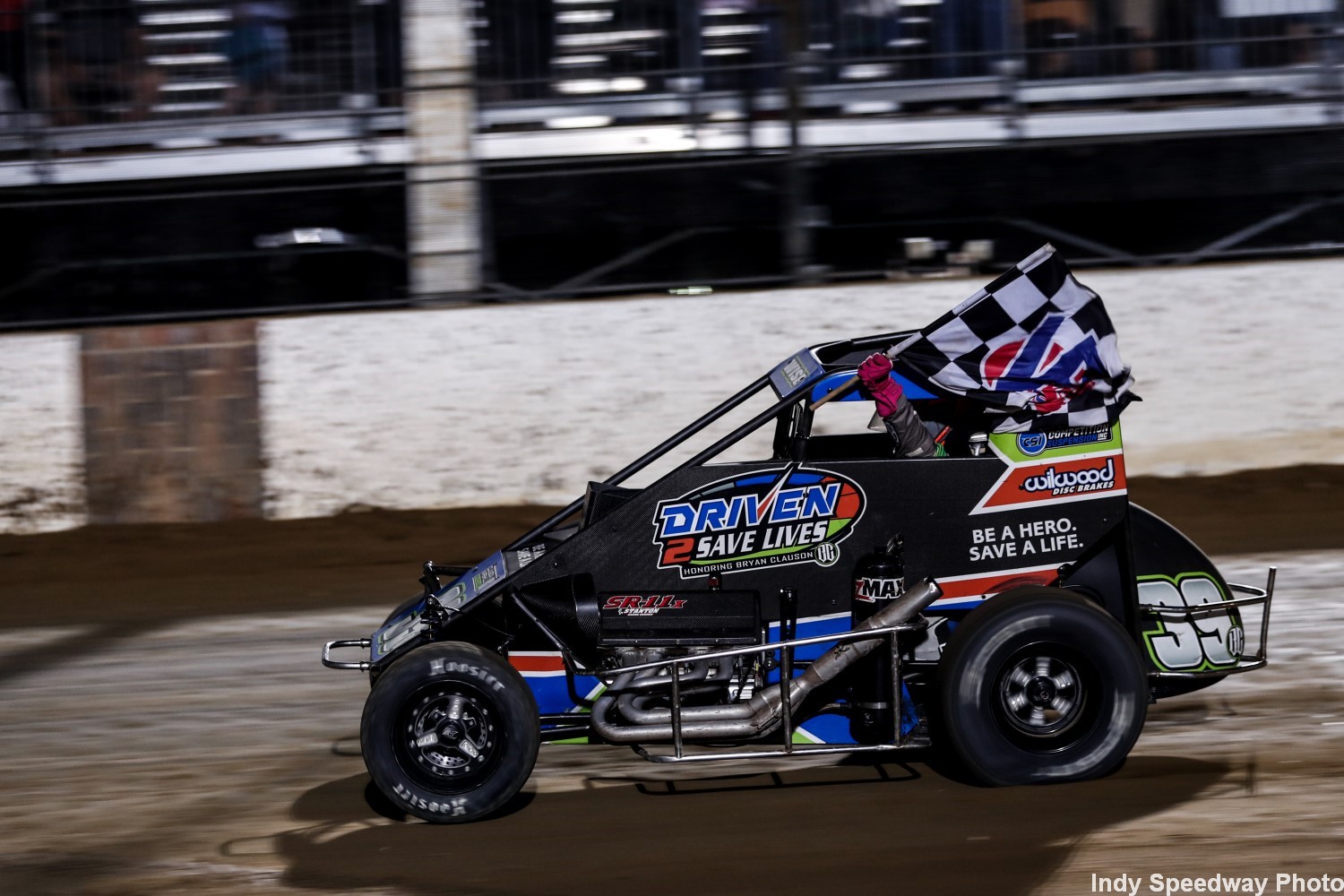 Teen phenom Zeb Wise held off hard-charging runs from NASCAR stars and his Clauson-Marshall Racing teammates for a storybook win in the second annual Driven2SaveLives BC39 Powered by NOS Energy Drink on Sept. 5 at The Dirt Track at IMS.

Angola, Indiana, native Wise earned $15,000 for his third USAC National Midget victory of the season in the No. 39BC sponsored by the race's title sponsor, Driven2SaveLives, and co-owned by Tim Clauson, the father of race namesake Bryan Clauson.

The race name, distance and Wise's number are in honor of USAC champion and Indianapolis 500 veteran Bryan Clauson, who died in a racing accident in 2016. Clauson and his father spotted Wise's talent during a quarter-midget race five years ago at the Indianapolis Motor Speedway, and Tim Clauson asked Wise to join the team as a development driver just a few months after Bryan's tragic death.

"What a cool moment for not only me and the No. 39BC as Bryan's last pick, but the Clauson-Marshall guys finished 1-2-3," Wise said in Victory Lane. "It doesn't get much better than that. It's pretty amazing. It wouldn't be possible without you amazing fans.

"We're all one big family back there at Clauson-Marshall. It just shows what Bryan can do, with him, (IMS President) Doug Boles and Scott Petry setting this whole race up. Actually, I'm way blown away to be the winner tonight. I don't have words. It hasn't sunk in."

Wise didn't sail smoothly to the win. He started fifth and quickly jumped to second behind pole-sitter Thomas Meseraull. A caution with 21 laps to go in the 39-lap feature bunched the field, and on the restart, Wise shot to the lead with uncanny anticipation of the green flag.

He held the lead through to another caution, but lurking behind him was Wednesday night's Stoops Pursuit winner and NASCAR Cup Series star Kyle Larson, who rallied through the field after starting 16th. On the restart, Wise bolted to a five-car length lead, forcing Larson to chase.

With 12 laps to go, Wise held off Larson in a sizzling battle for the lead. Then, the two drivers made contact in Turn 2. Wise was riding the cushion of dirt against the outside wall and forced Larson to make the pass on the bottom. When Larson made the pass, he slid into Wise's car.

At the same time, another caution came out, and the battle between Wise and Larson continued.

This time Larson didn't let Wise escape on the restart. Larson dove to the bottom in Turns 3 and 4 to pass Wise, who was still riding the high line. As Larson made the pass, Wise caught the wall. Larson and Wise made hard contact, cutting Larson's left rear tire and ended his night and dream of a sweep of both races this week on the quarter-mile dirt oval in the IMS infield.

Wise kept second place behind 2018 BC39 winner Brady Bacon, but the contact bent Wise's steering arm, setting him up for a long remainder of the night as he manhandled his car.

Bacon held the lead for four laps under green, but Wise jumped back into the lead for good with seven laps remaining.

During all the chaos, NASCAR Xfinity Series star Christopher Bell made his way to third and was charging hard for the lead. But Bell drove into Turn 3 too hard, hit the wall and flipped. He was unhurt, but his race was over.

That set up the thrilling four-lap shootout for the win between the Clauson-Marshall Racing drivers, with Courtney unable to challenge his teen teammate for the victory.

"The kid is frickin' 16 years old, and he beat some of the best in the business," said Courtney, who started 20th. "Second sucks, but to sweep the podium with Clauson-Marshall is pretty incredible."

It's no coincidence that Wise drives the No. 39BC since Wise was Bryan Clauson's last protégé. It all started at Indianapolis.

Tim and Bryan Clauson's saw Wise competing in the Battle at the Brickyard USAC quarter-midget race in 2014. They were impressed with Wise's driving ability. After the event, they introduced themselves to the Wise family. That led to Wise immersing himself in the Clauson-Marshall Racing team one summer during Indiana Sprint Week and learning under Bryan's wing.

This is Wise's second year driving the No. 39BC. He picked up his first career win in July 2018 and broke Clauson's record as the youngest-ever USAC National Midget winner. Wise backed up that victory a month ago by claiming two wins during Pennsylvania Midget Week, including out-dueling Larson on Aug. 1 at Action Track USA.