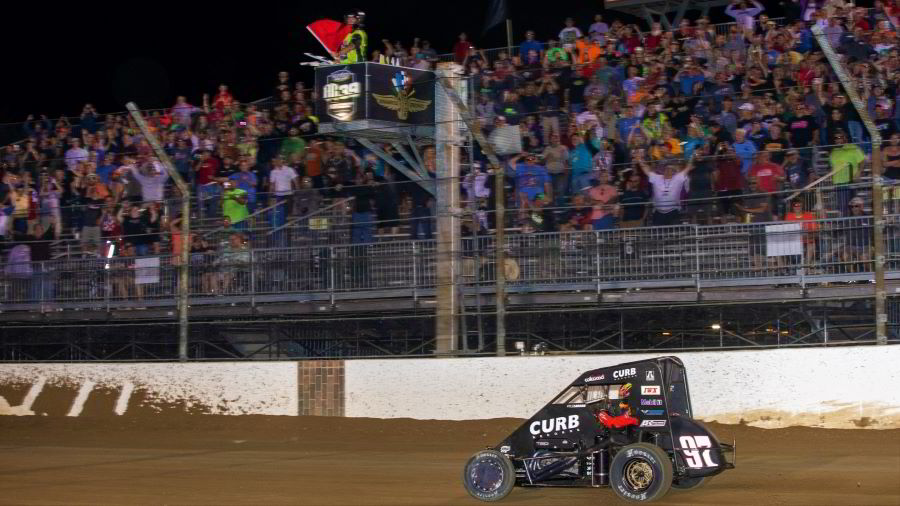 NASCAR star Kyle Larson prevailed in a thrilling, late-race battle to emerge from a last-lap, last-corner fracas victorious in the Stoops Pursuit race at The Dirt Track at IMS on the opening night of the Driven2SaveLives BC39 Powered by NOS Energy Drink.

"This track is so racy that sliders are easy to throw, and Mike (Pickens) was throwing everything he had at me," Larson said after the race. "We made contact there on the backstretch. He was trying to park it on the bottom. That was wild. I didn't know it was going to be that crazy of a race. I hope you guys enjoyed it."

The field of 24 cars was whittled to just Larson, Grant and Pickens for the final five-lap segment of the elimination-format exhibition race for USAC National Midget Championship cars. Larson was nearly eliminated from the event in the second-to-last segment, but he gained two positions before the end of the segment to keep himself in the event.

Larson, Grant and Pickens traded all three positions back and forth in the final segment. As the white flag came out, the three drivers found themselves bunched together heading into Turn 3 of the quarter-mile dirt oval.

Pickens committed his car to the inside groove, while Grant went to the outside and Larson found himself in the middle lane. Pickens rutted his car and flipped in Turn 3. Larson spun trying to avoid Pickens' airborne car, and Grant backed his car into the wall and flipped as he evaded Pickens.

With Larson's car staying on the ground, he did a 360-degree spin on the inside line. He spun his car in the right direction, gassed it up and crossed the finish line for the victory. Both Grant and Pickens were unhurt in the wreck.

Larson is perfect so far through one of his three races this weekend at IMS. He also hopes to qualify for the A-Main feature for the Driven2SaveLives BC39 Powered by NOS Energy Drink on Thursday night at The Dirt Track at IMS and also will race in the Big Machine Vodka 400 at the Brickyard Powered by Florida Georgia Line on Sunday in the No. 42 Chip Ganassi Racing Chevrolet.

"That's probably one of the most fun times I've ever had in a race car," Larson said after the Stoops Pursuit victory. "For an off night (from Cup Series racing) like that, that was a ton of fun. You can't say enough about the Indianapolis Motor Speedway and (IMS President) Doug Boles and what they do to put this event on. Awesome crowd tonight; I'm sure it will be even bigger tomorrow. Hopefully we can build this event into something huge. I look forward to it."

Larson did not race in the inaugural BC39 last year. He said that after seeing last year's thrilling action in front of a sold-out crowd and feeling like he missed out on something big, he knew he had to race in this year's event.

The Stoops Pursuit race consisted of 24 drivers that raced their way into the event via heat race wins, as well as drivers that were the top in qualifying points from each heat. Plus five drivers were placed into the field through promoter options.

The 25-lap event was broken into five-lap segments. After each segment a caution was thrown, and cars that were passed, along with the car running last at the end of the segment, exited the track. The field was filled with racing stars such as NASCAR's Christopher Bell and Ricky Stenhouse Jr., as well as defending Stoops Pursuit winner Zeb Wise and defending BC39 winner Brady Bacon.

The Driven2SaveLives BC39 Powered by NOS Energy Drink will feature another full night of action Thursday at The Dirt Track at IMS. Public gates open at 3 p.m., with hot lap sessions starting at 5 p.m.

Tickets for the Driven2SaveLives BC39 presented by NOS Energy Drink are available at IMS.com and at the gate.

All Shaw Grandstand seats are reserved Thursday, with prices ranging from $35-$75. There is no General Admission seating available Thursday night. All kids need a ticket to the event regardless of age. Pit passes are available for $25 and do not include gate admission.