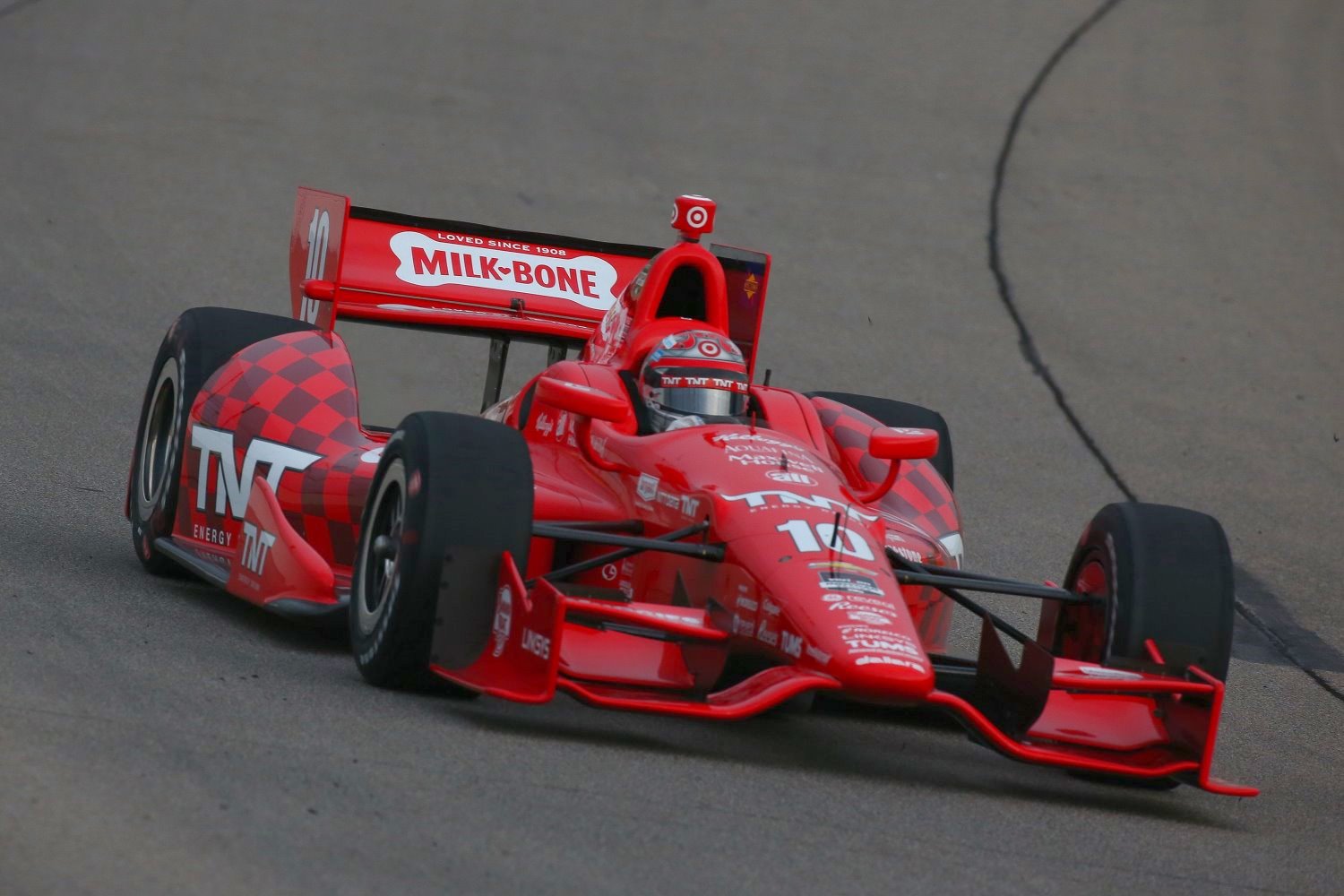 THE MODERATOR: We'll get started with our post qualifying press conference. We're joined again today by Tony Kanaan. Tony Kanaan was the winner here at Iowa Speedway in 2010 and finished on podium in the last four seasons, qualifying second for tomorrow night's race.

Tony, we were talking this morning about how with different teams in different situations you never know if you're going to come back and have the same strong results you've had before. But obviously a great result for tomorrow night's race.

TONY KANAAN: Yes, it's part of the job. The result will be tomorrow. But obviously a great qualifying effort from the team. Four cars in the top seven, that's pretty good. The two Target cars in the front row, that makes Chip happy, makes Target happy.

I'm pleased with the car. The way the qualifying draw works, which is by luck, you just got to draw your number. Drawing an early number hurt us just a little bit. But front row, it's all right.

THE MODERATOR: With all of the rain today and also different rubbers on the track, what were track conditions like for qualifying?

TONY KANAAN: Track was fine. The truck rubber plays a little bit of a fact, but I don't want to make that as an excuse why I'm not on the pole. We got an early draw. Scott had the opportunity to change his car a little bit according to my run. That's what we do for each other.

I told him next time if he gets an early draw, he's going to pay me back (laughter).

I think the truck rubber was a little bit of an effect. It will be much bigger tomorrow. If they race tonight and it doesn't rain all day tomorrow, the first two stops during the race definitely, you know, going to have to adjust the car.

THE MODERATOR: Questions for Tony.

Q. When it comes to Chip Ganassi Racing, do you feel in some ways the sleeping giant has been woken up a little bit the last couple of weeks?

TONY KANAAN: I think Chip would never want the giant to sleep, I have to say.

So, yeah, I think we're coming along. We're doing a lot of hard work. We did a lot of tests in the past few weeks. That's the nature of that team. They're here to win. They proved that the past 25 years. So it's not going to be any different.

I think if people count us out just because we were struggling in the beginning of the year, that's a big mistake. We're going to come back and we're going to try to do our thing, minimize our mistakes, keep the level that Chip and Target expect us to be, which is winning races.

Q. You just mentioned you struggled in the beginning of the season. What was the weakest area, chassis or…

TONY KANAAN: It's tough to point it out. I can't get into much details. I think we took a direction with our setups that probably wasn't the right one. We thought it was the right one. It cost us a little bit in the beginning of the year.

As a team we have a lot of capable people. Me and Scott work really hard. People don't realize how the chemistry of the team has changed since we lost Dario. It was a big change. It was an unexpected change. For me to try to work with Scott, it took a little bit.

I think the more that we spend time and test together, we kind of find out what those cars need. We're keeping on making it better.

I can't single out one thing why we struggled. The reality was we were struggling. I don't know. I can't say we're completely out of the hole yet. I mean, we had good results the past three weekends, with some unfortunate mistakes not by the setup of the car.

Hopefully we'll keep at the same level we are right now and ramp it up and we'll fight for this championship.

THE MODERATOR: We're also joined by the pole winner, Scott Dixon, with Target Chip Ganassi Racing. Scott started on pole here in 2007. Also started first in 2008 when the field was set by points. With this pole, Scott ties Gil de Ferran for 13th career all-time list for pole wins. Also Scott's 21st pole. He also has won one pole for the last eight consecutive seasons in his career.

Scott, a great qualifying finish for you and the team. Tell us about your qualifying run.

SCOTT DIXON: I think we had a bit of a tough test here a few weeks ago with the setting on the car that we missed all day.
Coming back and having the car set properly has been a dream to drive. I think it's been a lot of different things. I think with new people on the team, new engineers, teammates, I think we've changed some of the short track oval setups that we've maybe had in the past.

It's kind of been eye opening and a lot of fun to drive something different. But, yeah, this weekend the car rolled off the truck really well. The first session we didn't do a (indiscernible). The second one we kind of missed on the balance and had to lift quite a bit. But we still had the fifth quickest time so we knew that we had some good speed in the car.

With my qualifying going 14th and T.K. and Ryan having to go before me, we were able to translate how the track was. It seemed like the track had a bit of understeer, so we were able to put some front wing in and the car balance was pretty good.

The qualifying I think for all of us went very smooth. It's great to see all four Ganassi cars in the top seven.

THE MODERATOR: Questions for Scott.

Q. Tony said earlier four cars in the top seven. I think you share all of the information, setup. Is it fair to say you have nearly identical setups or totally different from driver to driver?

SCOTT DIXON: You know, I think the past two weekends actually we've been fairly close. The dampers can be kind of one thing. I think a couple of the cars were on the same dampers. I know Charlie went a little bit more conservative in qualifying. He could have been probably a little bit further up on their side of the team.

But, yeah, it's hard when you get a lot of different people into the room for the first year. For us, all four cars are run out of one truck which definitely changes the dynamic. Trying to get all of us to agree on the same thing is pretty tough and most of the time it is unrealistic. But the cars are fairly close this weekend.

THE MODERATOR: Tony was just in here saying because he went before you, he gave you some advice before you went out and next time you go before him, you will have to return the favor. Will you be willing to do that?

SCOTT DIXON: Yeah, absolutely. I think I had to do that at Pocono, but my speed was so slow, I don't think he even listened to me. So we'll see.

THE MODERATOR: Thank you, Scott.