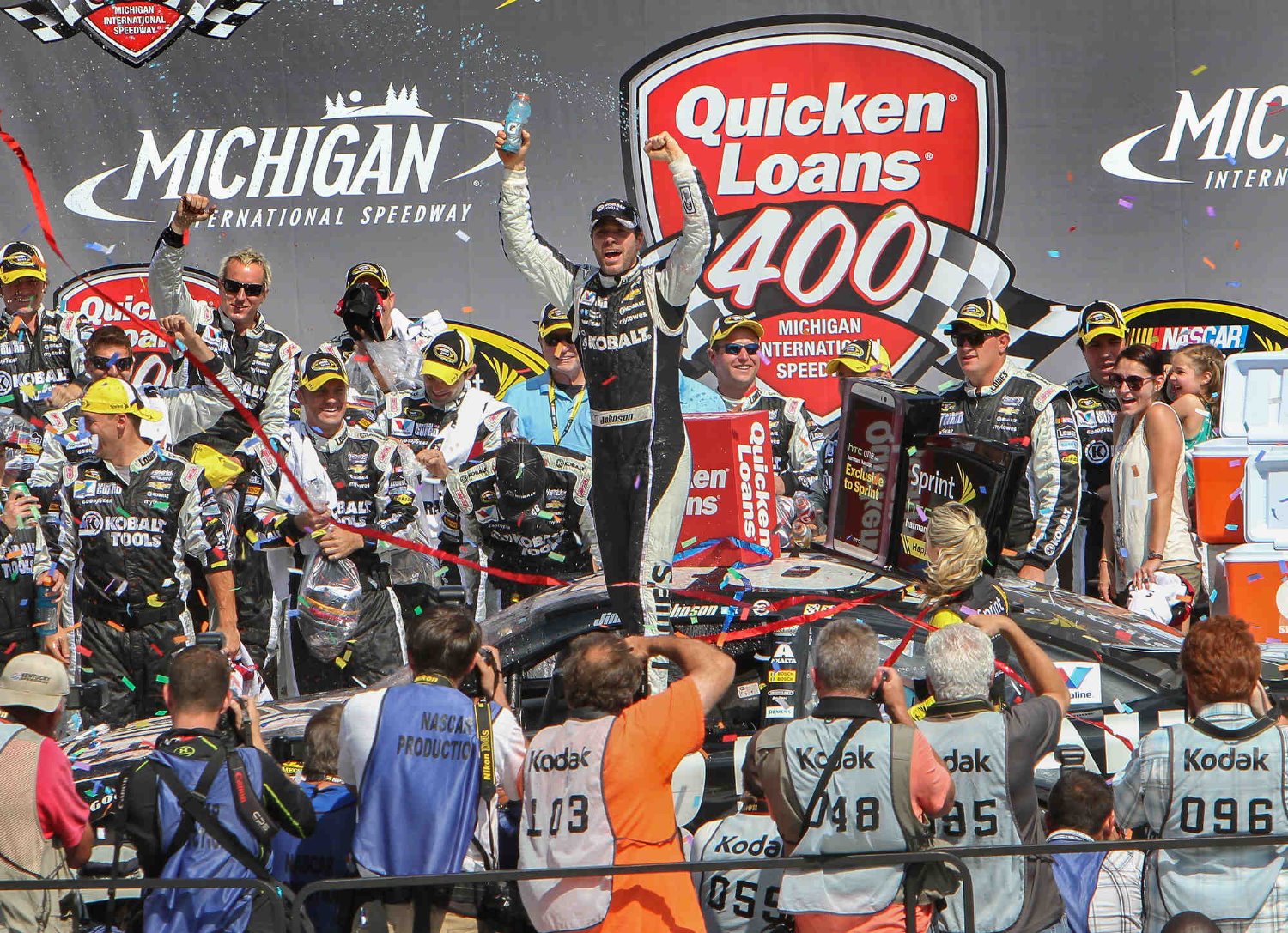 At long last, Jimmie Johnson knows what it feels like to visit Victory Lane at Michigan International Speedway.

The six-time NASCAR Sprint Cup Series champion took the lead for good on Lap 191 after a cycle of pit stops and cruised to the checkered flag at Sunday's Quicken Loans 400 to end a 24-race drought here.

"We've figured out every way to lose this race and today we were able to get it done," he said after getting out of his No. 48 Chevy.

Johnson had encountered heartbreak several times when leading late here and admitted he was nervous as he dashed through the final few laps.

"About 200 yards before the finish line I knew if the car exploded, I'd still make it across the line," he said with a chuckle, "so that’s when I finally relaxed."

Johnson pitted on Lap 165 and took on four tires and enough fuel to finish the race, which was green the rest of the way. Anyone close to him pitted later, leaving Johnson comfortably ahead as Hendrick Motorsports captured its fifth straight Sprint Cup Series race.

"We were really in a win-win situation," said Johnson, who led 39 laps and jumped to second in the Sprint Cup points standings behind Gordon. "Those guys had to come to pit road to make it to the end.

"Once the strategy unfolded, we knew we were in the catbird seat."

Crew chief Chad Knaus said the team had an extra ace in the hole.

"We knew there was going to be some opportunities to play some strategy today," he said. "We were fortunate to have a fast racecar and hit the strategy correct."

The car was the same the team used to win Johnson's first race of the season at Charlotte.

Johnson's win capped a stellar day for HMS, which saw all four Chevys in the top seven thanks to Kahne, Jeff Gordon and Dale Earnhardt Jr., who were sixth and seventh.

Johnson became the series' first three-time winner and picked up his 69th career Sprint Cup victory. He's finished first in three of the series' last four races, moving from fourth to second in the series points standings, 15 points behind Gordon.

Harvick was especially fast on restarts during the first 150 laps of the race but got caught in a series of green-flag stops that dropped him to second. He did little to hide his frustration.

"The car was fast, just wound up on the wrong side of the strategy," he said.

Harvick had the fastest car on the track for most of practice and set a new track record to earn the pole.

The pit strategy chess game forced several other contenders farther back in the field, including Joey Logano, who led the field for 15 laps before being passed by Harvick on Lap 141.

The race wasn't quite a lap old when Brian Vickers brushed the Turn 4 wall, then spun before collecting Travis Kvapil near the entrance to pit lane. Rookie Kyle Larson and Martin Truex Jr. brought out another caution on Lap 6 when they made contact near Turn 2.

Casey Mears and Brett Moffitt tangled in Turn 4 on Lap 115 and Aric Almirola and Denny Hamlin spun in the same place on Lap 122 to bring out another caution. The race was yellow-flagged eight times for 36 laps.

It was Hendrick Motorsports’ fifth consecutive victory, the third time it has accomplished the feat, with Johnson winning three of the last four Sprint Car Series races.

Harvick led a race-high 63 laps, but got caught in a strategy battle concerning tires and fuel in the latter stages of the race that didn‘t go his way, but still managed to post his 11th top-10 finish in 27 races at MIS. It was his seventh top-10 finish this season.

“I mean the car was fast, we just wound up on the wrong side of the strategy," Harvick said. “We finished second and that’s it."

The crucial strategy for Johnson came with 35 laps remaining when crew chief Chad Knaus called his driver in under green-flag conditions for a four-tire change when two-tire changes appearing to be a more popular option for better track position.

Johnson left the pits in 16th place, but all of his closest competitors had yet to pit for a final time. They took two tires and sometimes none, just topping off their fuel tanks, but it allowed Johnson to pass all of them and take the lead for good with nine laps remaining.

“We were really in a win-win situation because all of those other guys had to go to pit road to make it to the end," Johnson stated. “Once I got an idea of how the race was unfolding I knew we were in the catbirds seat and we were able to take advantage of it."

Knaus said he knew there were going to be opportunities to play the strategy game Sunday.

“We also knew we had a fast race car and you could maybe overcome strategy that maybe somebody else would play," he added. “We were fortunate enough to have a very fast race car and hit the strategy correct at the right time, and obviously put it all together for a solid run."

JIMMIE JOHNSON, NO. 48 LOWE’S/KOBALT TOOLS CHEVROLET SS – Race Winner
THIS RACE HAS GOT TO HAVE BEEN A TOUGH ONE TO PUT THAT CHECKMARK NEXT TO IT WITH A WIN:
“Yeah, it has been. We have figured out every way to lose this race. And today we were able to get it done. A huge thanks to Lowe’s and KOBALT and all the employees at Lowe’s; I encourage everybody to enjoy this great spring weather and do a little shopping now. Thanks to Chevrolet and the fans and my fans. And for so many years, my dad was here and I wanted to win this race with him here. But I know he’s up in Upper Michigan with my two brothers, racing some off-road trucks. So, Dad, we did it finally. And then as a father (himself), what an awesome day. It tickles me deep. And I sure want to win everybody out there a Happy Father’s Day."

JOHN KNAUS, CHAD’S FATHER, IS ALSO VERY PROUD OF THE CALL HE MADE ON THE PIT BOX.
“For sure. We just saw John in Chicago. We were doing a tire test there. It’s wild, I’m sure, for a parent, and I’ll experience it someday, to watch your kids take off and do something. I don’t want to get old, but I look forward to that day and I know it’s out there for me (laughs). But it was an awesome performance. I have to thank everybody at Hendrick Motorsports and Mr. H. That’s five in a row for the Hendrick organization. Great power under the hood. It was a fantastic race car. I thank everybody for all they do."

ON HIS WIN TODAY:
"Just so happy to do it. We've always talked about winning here and have been so close. I want to thank all the fans for the awesome turnout today. There was a bunch of you out there. Big thanks to Lowe's and Kobalt. Want to encourage everybody with the rest of the afternoon, the nice day that you have, to go to Lowe's and buy some stuff and plant it in your yard, or whatever you have got to do. But just an awesome performance. As those laps wounds down at the end, I was just wondering what was going to happen, and fortunately nothing did.

DID YOU HEAR ANYTHING IN THE CAR?
"I've been through so much here, I just kind of put my arms up in the air and said 'Well, if it going to happen, it's going to happen – there is nothing I can do about it'. But we had a fast, fast race car, and Chad (Knaus, crew chief) knew the strategy he wanted to play at the end, and he nailed it just right."

TALK ABOUT CHAD'S STRATEGY:
"We really were in a win-win situation. Those guys still had to come to pit road to make it to the end. Once I got an idea of how the race was unfolding, I knew we were in the catbird seat, and were able to take advantage of it."

WHAT DOES THIS WIN SAY ABOUT WHERE THIS RACE TEAM IS? YOU HAVE WON THREE OF THE LAST FOUR RACES:
"We are getting stronger as the No. 48 – there is no doubt about that. I think it is obvious that Hendrick Motorsports produces fast race cars. They build fast engines. It doesn't matter if it is Stewart-Haas, or the Hendrick organization. We're winning a lot of races, and running up front. So, we just have to do the best that we can to get stronger as the Chase gets closer, and make sure we are on our game when the Chase gets here."

CHAD KNAUS, CREW CHIEF, NO. 48 LOWE’S/KOBALT TOOLS CHEVROLET SS – Winner
YOU HAVE COME CLOSE TO WINNING SO MANY TIMES. WERE YOU HOLDING YOUR BREATH FOR THOSE LAST 5 LAPS?
“Yeah, because it seems like we’ve had that opportunity in the past. And with less than five laps to go, we’ve had issues of some form or fashion. So, I just can’t say enough about everybody at Hendrick Motorsports. They’ve just done a great job and I’m really proud of Jimmie (Johnson) and the guys."