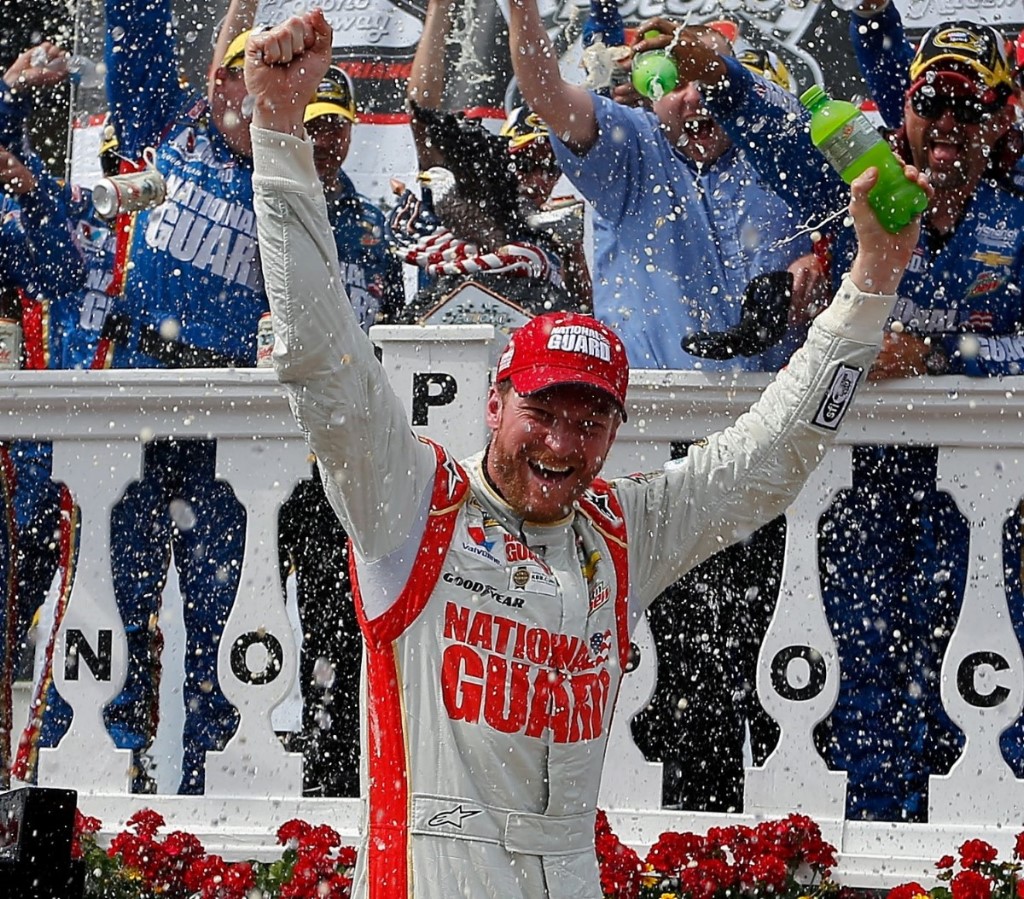 He only led 11 laps, but Dale Earnhardt Jr. took his first ever NASCAR Sprint Cup victory at Pocono Raceway by passing Brad Keselowski's Penske Ford with five laps to go in his Hendrick Chevy to win the Pocono 400.

It was the 2nd win of the year for Earnhardt Jr.

Keselowski was dominant for most of the race, leading 95 of the 160 laps.

The NASCAR Sprint Cup Series is at Michigan International Speedway for the Quicken Loans 400 on Sunday, June 15 (1 p.m. on TNT).

DALE EARNHARDT, JR., NO. 88 NATIONAL GUARD CHEVROLET SS – WINNER
TELL US ABOUT HOW MUCH YOU KNEW ABOUT BRAD’S ISSUES WITH THE OVERHEATING AND ALL THAT AND DID HE LET YOU BY?
“Well he didn’t want to let me by, but I don’t know if his motor was going to make it. That is unfortunate for him. He had me beat I couldn’t get to him. Just real hard to pass here. But I have lost some in some strange ways so it feels good to win one like that. I want to thank National Guard, Diet Mountain Dew, Kelley Blue Book, Chevy and Sprint and all our partners. Thank Rick and Linda (Hendrick), my team, what a great bunch of guys. We always have to thank those guys, but man when I talk about my team I really mean it. These guys are a hell of a group, obviously Steve Letarte and everybody back home watching. I don’t have much to do tomorrow so tonight is going to be a long one."

BRAD WANTED A LITTLE BIT OF HELP TO GET THAT PAPER OFF BUT YOU WEREN’T ABOUT TO HELP HIM WERE YOU?
“Well he knew I wasn’t going to do that. I mean I got to try to win the race. We had a little temperature on our car too at the end. I don’t know if we had something on the grille. Brad definitely had the better car and I am definitely owning up to that, but we won the race. We are definitely going to enjoy it. It goes into the books and helps us toward the Chase. We were there all day running great. We had a fast car just never really got that track position until the end. You’ve got to be there and we were. Somebody had an issue so we capitalized. I’m real proud of my team and especially Steve Letarte. This is his last year. I’ve never won here. I’ve never been here, this is amazing. I can mark this one off."

A LOT OF STUFF TO TALK ABOUT LET’S START WITH THAT PASS THAT YOU MADE ON BRAD KESELOWSKI AND WHAT YOU SAW COMING OR IF YOU SAW IT COMING:
“I didn’t see it coming. I didn’t think he would go up there to try to get the stuff off his grille. I don’t think he ended up getting it off his grille. I was surprised that he did that, but he felt like he needed to I suppose. He definitely had the race won up to that point. I was having a hard time making any ground on him, but we both had real competitive cars and it feels good to run well and capitalize on some else’s issue. We have told ourselves many times we just need to be around toward the end of these races and we can capitalize. We did today. I’m proud of my team. Steve Letarte and the whole crew, this is the best crew. I have so much fun with these guys. We all get along so well and I couldn’t be having more fun driving race cars I will tell you that right now. I want to thank the National Guard, Diet Mountain Dew, Chevy, Sprint, Kelley Blue Book all our partners. Just real happy to be in Victory Lane I have never won at Pocono so this is a thrill for me."

WHAT DOES THIS SECOND WIN MEAN FOR YOU AND THIS FIRST WIN AT POCONO?
“Well I just love winning with these guys. Wins aren’t really anything unless you can enjoy it with good people. Without good people around there is not much to them. I’m having the best time of my life. I think the rest of the crew could say the same. Steve has got to be enjoying himself this year. We have worked to get to this point to be in position to win races. It’s great to finally do it. We didn’t have it won, Brad (Keselowski) definitely had it won and I definitely understand that, but we have got to be around at the end and we got the team poised and ready for that. We capitalized today."

IT LOOKED LIKE YOU HAD SOME DEBRIS ON YOUR CAR TOO WERE YOU WORRIED ABOUT THAT?
“My temperatures were going up, but I guess not as bad as Brad’s. I had a little bit of temperature, but nothing to worry about. We definitely had some red gauges, but they were still within good reason to stand on it and give it hell. I looked in the mirror and saw Brad didn’t have his debris off either. We were both going to chug along there and see who made it."