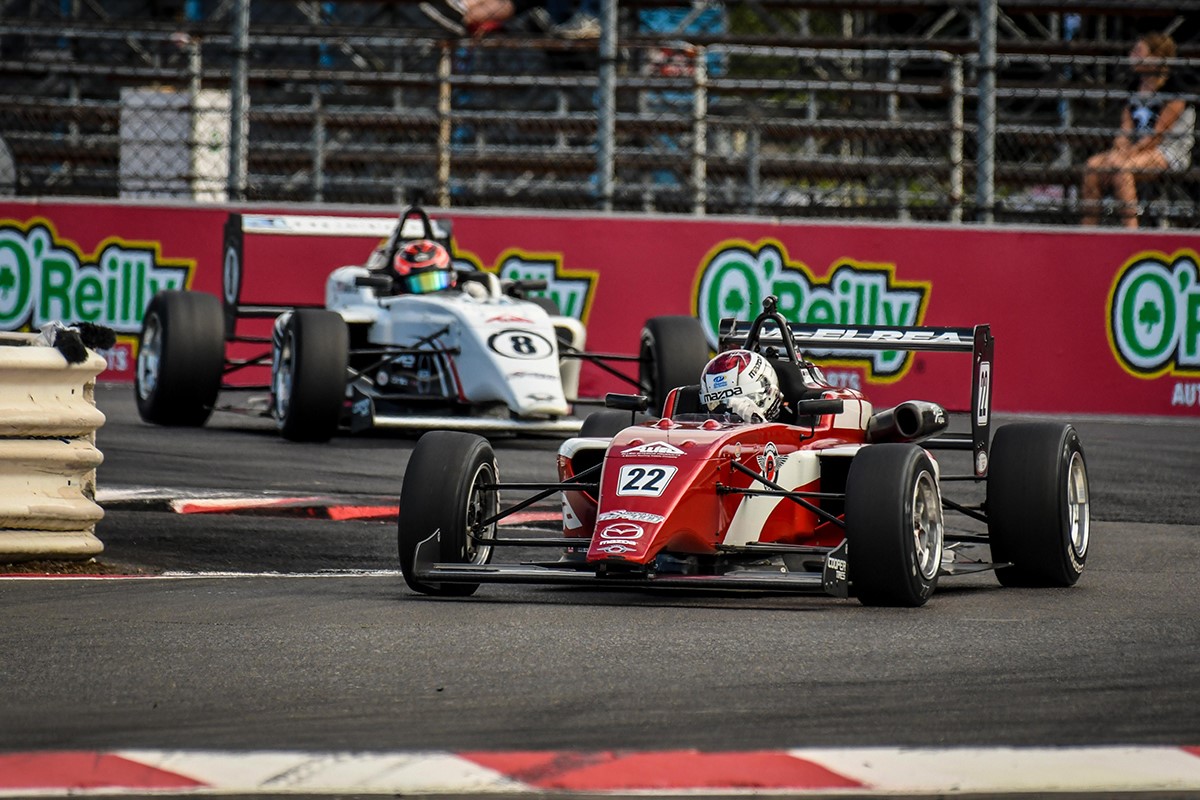 The battle for this year’s Cooper Tires USF2000 Championship tightened to just a single point, 285-284, as Hunter McElrea claimed a comfortable victory this afternoon at Portland International Raceway. At stake is a scholarship valued at close to $300,000 to move up one step on the Road to Indy ladder to the Indy Pro 2000 Championship Presented by Cooper Tires in 2020.

The New Zealander qualified on pole position this morning for Pabst Racing, then edged away gradually from season-long championship leader Braden Eves (Cape Motorsports) during the 25-lap Cooper Tires USF2000 Grand Prix Presented by Allied Building Products. The victory was McElrea’s third of the season.

Eves narrowly held on to second place ahead of Denmark’s Christian Rasmussen (Jay Howard Driver Development), who finished on the podium for the fifth successive race.

McElrea, who had finished on the podium in all but two of the first 11 races, maintained his advantage over second-place qualifier Eves at the tight Festival Curves chicane on the opening lap. The pair remained tied together for the opening eight laps and soon began to edge away from Rasmussen in third. But then McElrea really hit his stride, turning a string of consistently fast laps to stretch his lead with every turn around the 1.964-mile road course. His eventual winning margin was 4.8713 seconds.

Instead of challenging for the win, Eves, who had won five of the first seven races this year, had to work extremely hard to fend off Rasmussen. They were separated by just a half-second at the checkered flag.

Crawford held on for sixth, narrowly ahead of Mexico’s Manuel Sulaiman (DEForce Racing), who beat Crawford to this year’s NACAM F4 Championship, and Brazilian Eduardo Barrichello, who enjoyed a strong debut with DEForce Racing.

Augie Pabst earned his third PFC Award of the season as the winning car owner. Pabst Racing also closed to within three points of Cape Motorsports in the quest for a third successive Teams Championship. Three races remain this season, including one more tomorrow which will see the green flag at 4:15 p.m. PDT.

Hunter McElrea (#22 Mazda/Doric NZ/Miles Advisory Partners-Pabst Racing Tatuus USF-17): “The start was the most stressful part of the race – I had a car inside and a car outside, but it was my corner. I got through cleanly, and just put my head down and pulled away. I tried to conserve for the first few laps to see where the group was, and then started pushing harder to extend the gap. But races like that are what you hope for – Pabst Racing gave me a perfect car and that made my life so much easier. When you’re in front, you can control things and focus on your own thing. The championship is in the back of my mind, it’s extremely close now, but I’ll focus on getting poles and wins and things will take care of themselves."

Braden Eves (#8 MDRN Livery/Community Choice Financial-Cape Motorsports Tatuus USF-17): “It was quite hairy in Turn 1. I expected there to be a crash, so I was happy to see us all get through cleanly. I was able to get inside Hunter, but he held me off and I came out of all that P2. I felt like I was catching him, but halfway through the race his car just turned on and he took off. I didn’t have anything for him today, but I think I will tomorrow I’ll have new tires and he won’t, so that will help me. I still have the points lead and the advantage, and that’s what it’s all about now."

Christian Rasmussen (#6 JHDD/CSU One Cure/Lucas Oil-Jay Howard Driver Development Tatuus USF-17): “I think we were four-wide in Turn 1. I managed to get by and into third. The guys in front managed to pull a gap on me early in the race and I got some of that back toward the end, but not enough. We’ve been lacking a little bit on pace this weekend, but to take home my fifth podium in a row, I’m very happy. We’ll get back to the drawing board, analyze today and be better for tomorrow."