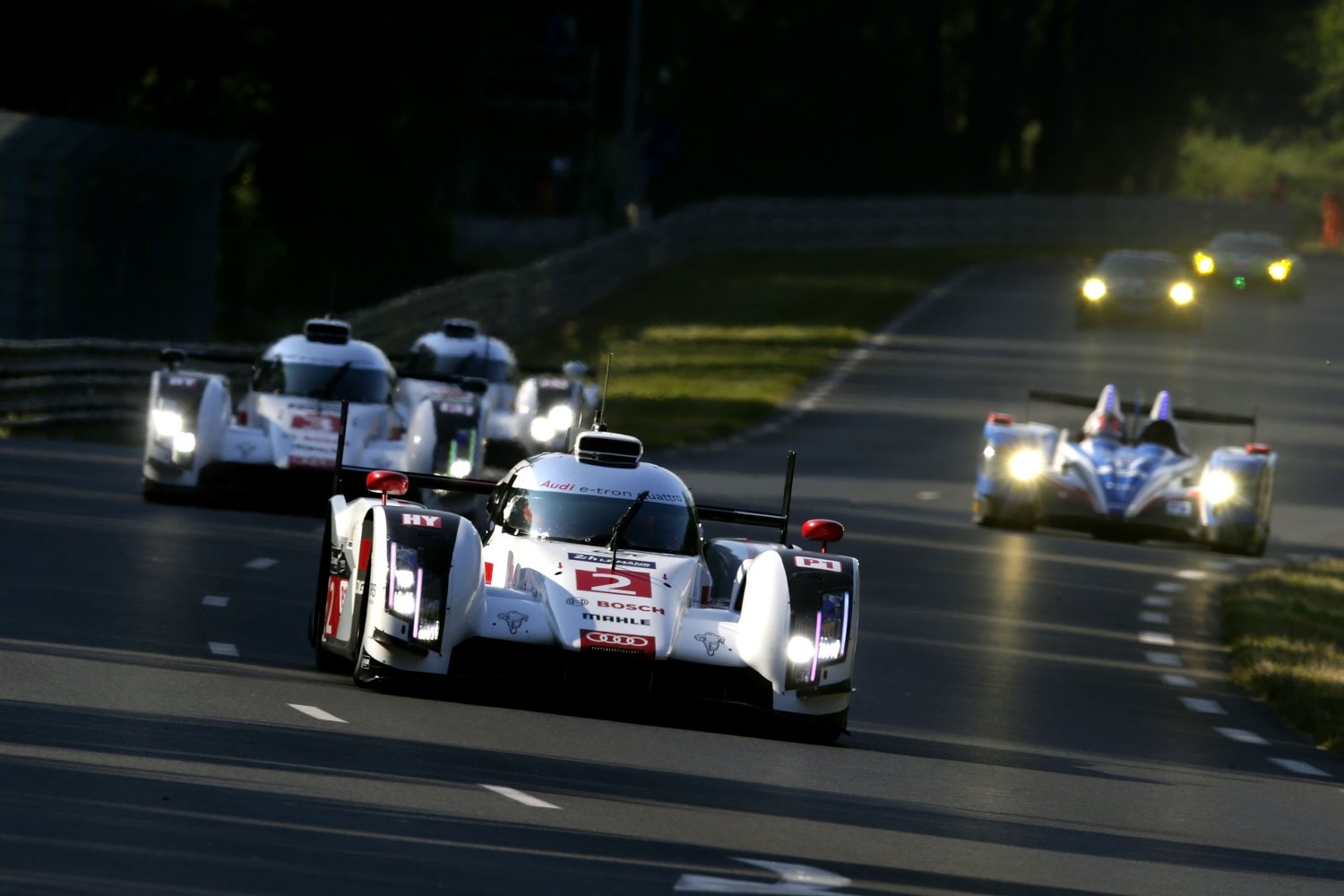 In front of nearly 300,000 spectators, Audi continued its unique string of victories in the Le Mans 24 Hours. In the 82nd running of the world's most important endurance race, Marcel Fassler/Andre Lotterer/Benoit Treluyer (CH/D/F) and Lucas di Grassi/Marc Gene/Tom Kristensen (BR/E/DK) made for a one-two Audi victory.

It marked the 13th Le Mans success for the brand with the four rings in only 16 runs – and may have been the most valuable one to date, as Audi Sport Team Joest prevailed against massive competition by Le Mans returnee Porsche and Toyota in an extremely tough race that was completely open for a long time. The decision in favor of the two Audi R18 e-tron quattro cars was only made in the final phase.

"We've seen many exciting races and celebrated great victories at Le Mans but this success has a very special significance," said Professor Rupert Stadler, Chairman of the Board of Management of AUDI AG, following the triumphant finish by the two Audi R18 e-tron quattro cars. "We didn't enter this race as favorites and in Porsche and Toyota had two very strong rivals. That we managed to win Le Mans again this time in spite of this is a fantastic achievement by the whole Audi squad. We're tremendously happy and my thanks go to all who have made this success possible."

"The new Le Mans regulations place an even greater focus on the efficiency of the race cars at Le Mans than before," said Professor Dr. Ulrich Hackenberg, who as Board Member for Technical Development is responsible for the motorsport program of AUDI AG. "In the TDI, the world's most efficient drive technology has prevailed at Le Mans yet again. At the same time, with our successful first use of the laser light, we continued our string of technological pioneering achievements at Le Mans. I'd like to thank everybody who has worked extremely hard for this success, above all of course the Audi Sport squad."

For Audi, the Le Mans 24 Hours was billed as 'Welcome Challenges' – and there were plenty of them in the 82nd running of the famous endurance race for the brand with the four rings. Following a serious accident of LoÃ¯c Duval in Wednesday's free practice, Audi Sport Team Joest had to prepare the #1 Audi R18 e-tron quattro in record time again from scratch and to replace LoÃ¯c Duval with Marc Gene. That this team was on course for victory on Sunday morning says everything about the feat performed by the mechanics. However, in the end, the change of an injector and a turbocharger narrowly prevented this fairy tale from coming true. With a gap of three laps Lucas di Grassi, Marc Gene and Tom Kristensen took second place.

Marcel Fassler, Andre Lotterer and Benoit Treluyer took the lead for the first time on Sunday morning, shortly after 5 a.m., after having put consistent pressure throughout the night on the Toyota that had been leading for a long time. As the turbocharger had to be changed on their R18 as well, car #2 temporarily dropped to third place before moving back to the front in a remarkable recovery during which Andre Lotterer also set the fastest race lap of 3m 22.567s.

Major misfortune was suffered by the squad of the third Audi R18 e-tron quattro with Filipe Albuquerque, Marco Bonanomi and Oliver Jarvis. Following a strong early phase, car number '3' during a safety car period in pouring rain, was hit in the rear at high speed by a GT Ferrari on the HunaudiÃ¨res straight. The powertrain of the R18 was so heavily damaged in the incident that Marco Bonanomi was forced to retire after just an hour and a half.

In the hectic first hours, the fascinating Le Mans prototypes of Audi, Porsche and Toyota were fighting captivating duels on the Le Mans high-speed circuit that kept the spectators in awe. The fans experienced one of the most gripping races in Le Mans history until noon on Sunday. The decision in favor of Audi was only made in the penultimate hour.

"It was a race of the kind you can only experience at Le Mans," said Head of Audi Motorsport Dr. Wolfgang Ullrich. "There were many incidents and none of the top cars made it across the distance without any problems. The decisive factors were that our Audi R18 e-tron quattro cars were able to drive consistently fast for 24 hours, our drivers made no mistakes and our squad responded properly and quickly to the issues that occurred. In Porsche and Toyota we had two really strong rivals who, as expected, did not make life easy for us. I always believed that, in spite of the particularly difficult prerequisites for us this year, we'd be able to succeed and that we've got the most efficient race car. That we succeeded again makes me feel proud. 'Thanks' also from me to the whole squad, but to our Management Board and our Group as well that make it possible for us to demonstrate 'Vorsprung durch Technik' at le Mans year after year. But I also express my respect for the performance delivered by Porsche on their return to Le Mans."

For Audi, this marked the 13th victory in the '24 Heures,' the eighth one with TDI Power and the third one with a hybrid race car. The team of Reinhold Joest celebrated its 15th success in the world's most important endurance race. Marcel Fassler, Andre Lotterer and Benoit Treluyer, after 2011 and 2012, achieved their third Le Mans triumph.

Porsche, meanwhile, saw both cars suffer undisclosed mechanical-related issues, although the No. 14 made it back out in the final 10 minutes. Because of the Porsche drama, the No. 8 Toyota TS040 Hybrid of Anthony Davidson, Sebastien Buemi and Nicolas Lapierre landed an unlikely podium finish.

The FIA World Endurance Championship points-leading Toyota was involved in a multi-car accident on the Mulsanne Straight during a sudden downpour in the second hour, which took out the No. 3 Audi.

TOYOTA Racing stood on the podium at the Le Mans 24 Hours but left the Circuit de la Sarthe with a sense of extreme disappointment after a frustrating race.

The #8 TS040 HYBRID of Anthony Davidson, Nicolas Lapierre and Sébastien Buemi finished third to extend their lead in the World Championship and record TOYOTA’s fifth podium finish at Le Mans.

That, however, did not tell the full story of a dramatic race which ended TOYOTA Racing’s 100% winning record in the 2014 FIA World Endurance Championship.

The #7 TS040 HYBRID of Alex Wurz, Stéphane Sarrazin and Kazuki Nakajima started from pole position and held a 90-second lead with less than half the race remaining.

However, an unexpected electrical problem related to the wiring loom forced Kazuki to stop the car at Arnage corner. With no chance of returning to the pits, the #7 officially retired after 13 hours and 53 minutes.

The #8 TS040 HYBRID also had high expectations of fighting for victory but realistic hope was ended within 90 minutes. In a sudden downpour, and on slick tires, Nicolas was involved in a multi-car accident on the Mulsanne Straight.

He nursed the badly damaged car back to the pits where the team worked quickly to replace front and rear bodywork, as well as replacing the suspension installation on the front left corner.

Around 50 minutes was lost to repairs, leaving the #8 eight laps down but determined to score as many points as possible having entered the third round of the FIA World Endurance Championship with a 16-point lead in the standings.

But Anthony, Nicolas and Sebastien kept up a consistent pace and moved into the top four, with an eye on the podium as technical issues affected several competitors.

Remarkably that goal, which looked so unlikely after just two hours of the race, was achieved within the last two hours and the #8 crossed the line for a bitter sweet third place.
While Rebellion Racing’s No. 13 LMP1-L retired early with engine failure, the Anglo-Swiss squad’s No. 12 Rebellion R-One Toyota of Nicolas Prost, Nick Heidfeld and Mathias Beche finished an impressive fourth overall, aided by the late-race retirements from the two Porsches.

Remarkably, only four of the nine LMP1s finished the race, in what proved to be one of the most unpredictable races in recent memory.

A Nissan-powered LM P2 car took the class victory at the Le Mans 24 Hours today for the second year in succession. The Jota Sport Zytek-Nissan strode to a dominant class win and fifth place overall at what will be remembered as one of the toughest Le Mans 24 Hours in recent years. Nissan power took a 1-2-3-4-5 finish in the LM P2 class in one of the best ever results for its P2 engine.

Today's result was a strong demonstration of the highs and lows of motorsport – a win for the NISMO-tuned Nissan VK45DE V8 engine but heartbreak for Jann Mardenborough and Mark Shulzhitskiy, Nissan's gamers-turned-racers who had to settle for fifth in class after leading for over 14 hours.

The No.35 Oak Racing Ligier-Nissan took the lead of the race a few hours in but had to give up the fight for victory just two hours short of the finish when they had a spark plug issue that left them down on power and unable to defend their position.

"It was during the first of my daytime stints this morning that I realized I wasn't getting full power from the engine," explained Mardenborough. "I came in for the team to check it out and ultimately the decision was taken to change some of the spark plugs. This fixed the issue but by the time we found it we had lost the lead and were too far back to fight.

"I'm happy with how I drove here," he continued. "My long stint last night is the best I have ever felt in a car and I loved racing in the dark. I'm happy about that and I feel proud that we led the race for 14 hours. We would have walked it without any issues. Le Mans can be cruel."

The AF Corse Ferrari of Giancarlo Fisichella, Gianmaria Bruni and Toni Vilander took a comfortable victory in the GTE category, after its early rivals faltered.

Bruni, who had qualified the 458 Italia on pole, crossed the line two laps clear of the leading Corvette C7.R, which overcame a safety car delay and a broken air jack in the pits to defeat the leading Manthey Porsche in the fight for second.

The ACO announced a weekend attendance of 262,000 people, the largest crowd since 1989.