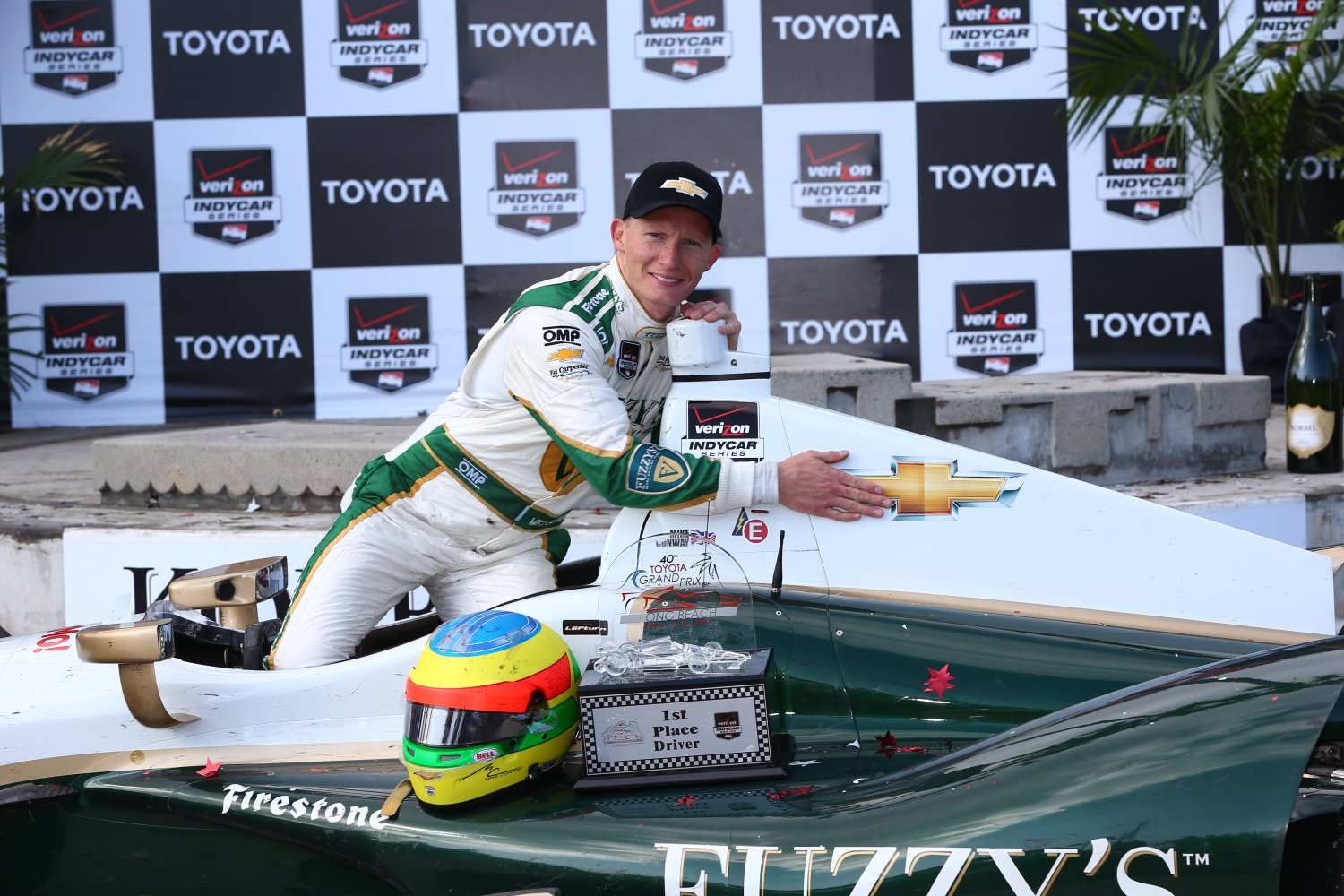 Another installment of North America’s most successful urban festival of speed is complete. Ed Carpenter Racing’s Mike Conway parlayed the misfortune that befell many of his competitors with an impressive charge through the field to score his third career victory, and 2nd in the Toyota Grand Prix of Long Beach.

Today, in our "Long Beach Postscript," AutoRacing1 will cover a myriad of topics from this weekend’s race in Long Beach starting with the lap 55 accident which helped move Conway to the front of the field.

The enduring memory from Long Beach 2014 will forever be the unfortunate coming together of then second-place Ryan Hunter-Reay with then leader Josef Newgarden on lap 55. Heading into turn 4 Hunter-Reay attempted what in the opinion of most (or should I say seemingly everyone but RHR himself) was an incredibly optimistic overtaking maneuver of Newgarden. The two collided and the resulting accident took out James Hinchcliffe, Takuma Sato, Tony Kanaan and Jack Hawksworth as well.

While the accident was unfortunate on a number of levels, the overriding sentiment was RHR uncharacteristically, yet royally, screwed up, costing Newgarden and the one-car Sarah Fisher Hartman Racing team a shot at victory. Further, Hunter-Reay did himself few favors in the P.R. department with what seemed to be a somewhat dismissive interpretation of the events. To paraphrase, RHR said there was a gap, and he went for the gap, because that’s what racers do.

This sentiment was not well-received, particularly within the Andretti Autosport team. Of course, Andretti Autosport, Hunter-Reay and teammate Hinchcliffe had spent much of the early race running 1-2. Both would see their chances of winning evaporate in an instant, leaving loads of intrigue in the aftermath.

Granted, it hasn’t exactly been the slobbering love fest we saw in the Wheldon-Franchitti-Kanaan-Herta glory days of a decade ago. Still, after some years of unhealthy levels of intra-team drama circa 2009-2011, things have been relatively copacetic at Andretti Autosport over the past three seasons. While no one has said this directly, some have insinuated the arrival of the easygoing Hinchcliffe in 2012 combined with Danica Patrick’s full-time move to NASCAR, has helped usher in an era of good feelings in the Andretti camp. At the very least, this positive chemistry has been cited numerous times by drivers and team members both on and off record.

Fast forward to Sunday, and for the first time in recent memory, the united front that has characterized Andretti Autosport for the past three seasons, was nowhere to be found. And while he didn’t necessarily throw his lead driver under the bus team owner Michael Andretti didn’t come to his defense either. There was no, “Ryan made a mistake, but he’s a great champion, and we’ll bounce back from this." Rather in a very measured, yet direct manner, Andretti expressed bewilderment at the lack of patience from Hunter-Reay

Hinchcliffe likewise cited the absence from patience, when talking about “someone," who didn’t exercise it, by driving like a “rookie."

Yes, there was no graceful deference to the 2012 series champion from either his boss, or his usually “glass half-full" teammate. There was no “we had the cars to beat, and we’ll come back stronger."

Rather, there were questions raised about RHR’s approach, the use of an indefinite pronoun to describe him, sympathy expressed for Honda, Newgarden, the other cars involved in the crash, and seemingly everyone except the pole-sitter who had led 51 of the race’s 55 laps until the debacle.

And from a certain perspective much of this can probably be chalked up as a one-time deal. Although, the attempted pass on Newgarden was at best incredibly optimistic, and Hunter-Reay did little to soothe over the friction, the fact remains RHR has been an incredibly clean, professional, heady driver over the past decade. Such sloppy driving is incredibly out of character for the classy Floridian.

The question is what will be the aftermath. Was this just a one-time deal? Will cooler heads prevail, and Andretti Autosport put this unfortunate incident behind them? Or could the fallout of Long Beach 2014 linger within the team, and be the beginning of a downward spiral for a team that has been a model of consistency and level-headedness over the past three seasons?

Worse, was the reaction by Hinchcliffe and Andretti a manifestation of not only a race thrown away but turmoil which has developed behind the scenes?

So many questions, that only time will answer. But we all know, chemistry and confidence can be incredibly fleeting. How exactly Andretti Autosport responds to the debacle that was Sunday’s race, will be one of the great storylines moving forward in 2014.

A storyline I believe will be a little more predictable going forward is that of Newgarden and SFHR.

I had the pleasure of speaking with the 23-year old Hendersonville, TN Saturday afternoon shortly after he qualified a career best fourth. He noted that the team had the race pace in St. Pete (started 22nd, finished 9th), and only a mess up in qualifying held them back. Having qualified fourth about an hour earlier, Newgarden said all that needed to be done was to put together a “mistake-free weekend," which, essentially, they did.

Of course, we all know what happened, and it wasn’t meant to be.

But let the record show that absent any gimmicky strategy, lucky yellow flags, heavy attrition or the like, Newgarden was P1 on nothing but sheer speed and clutch awesome pit work by the SFHR team. And with no more pit stops to the #67 Honda had just as good a chance as anyone to capture the victory.

And while we all know, racing can be incredibly cruel, the events of lap 55 had to be particularly gut wrenching for not only the talented Newgarden but…

It’s more than a little well known that SFHR has operated on something of a shoestring budget the past few years. Although oil businessman Wink Hartman has invested resources in the team, the team has struggled to retain full-time sponsorship, and probably would not exist absent the deep pockets of Hartman.

Fisher, the public face of the operation, has alluded to this in the past. While the team has had its struggles both on track and off, the popular team owner has remained upbeat. And in a paddock overrun by many of the stern, serious-about-everything types, Fisher is a breath of fresh air. In particular, the former IndyCar driver keeps nothing in reserve when it comes to two things: her passion for the sport, or her motherly doting when it comes to her beloved, talented young driver.

Still, credit Fisher, who in the aftermath of Sunday’s punch-in-the-gut didn’t throw anyone under the bus, nor play the woe-is-us card. Rather, Fisher did exactly what any strong leader would in such circumstances: acknowledged the disappointment, yet reaffirmed her unwavering belief in her team and young driver.

While Sunday was clearly not their day, better days are on the horizon for Fisher and Newgarden. And you get the sense those better days will be here sooner rather than later.

Although Long Beach had its fair share of surprises, Conway’s performance was not one of them. While the unassuming Brit benefited from the accident, Conway would have likely contended for at least a podium in absence of the melee, as he drove the #20 Fuzzy’s Vodka Chevrolet from the 17th grid position to victory, matching the all-time deepest starting for a Long Beach winner (Paul Tracy, 2000).

Right now, that’s what we’re expecting for Conway. Although Will Power probably begins as the favorite to win on any road or street circuit, the second name that comes to mind right now, is Conway. And when you consider many such as myself believed Conway committed career suicide 19 months ago, by opting out of oval events during the Fontana race weekend, that reality becomes all the more impressive.

Also, with the unique arrangement that Conway and team owner Ed Carpenter have set up, in which Conway drives the road and street courses, and Carpenter the ovals, the team is essentially going for race wins divorced from the context of an overall championship.

From a purely practical standpoint, consistency will be at more of a premium than ever. Yes, if Conway/Carpenter keep vulturing wins and podium finishes from the title contenders, there will be fewer points in circulation available for those contending for the championship. While one could say Conway cost 2nd place Will Power a victory Sunday, another way of looking at it is to note that Power, having won the opener at St. Pete and finishing 2nd at Long Beach, has defeated all other title contenders in the first two races.

Sure, this might be getting ahead of ourselves. Just know the possibility of the dynamic Conway/Carpenter duo picking up lots of race wins and podium finishes is a more-than-reasonable scenario.

And keep in mind: the rest of the field has a championship battle to consider. For ECR, having adequate quantities of Fuzzy’s Vodka with which to celebrate could be the bigger concern.

It was the best start in the history of the race and for once, no one crashed in Turn 1. It is the fairest way to start a race and IndyCar should distinguish itself from NASCAR by doing 100% of its races with a standing start. It takes more skill (which IndyCar prides itself on) and it is something the taxicabs would look silly doing.

Can you image 33 cars lined up on the grid for the Indy 500, engines rev, the lights go out, and 33 cars burn rubber into Turn 1. It would be a sight to behold. The fans will go wild. Tradition? Hell with tradition when the start of every Indy 500 is so strung out it's embarrassing.