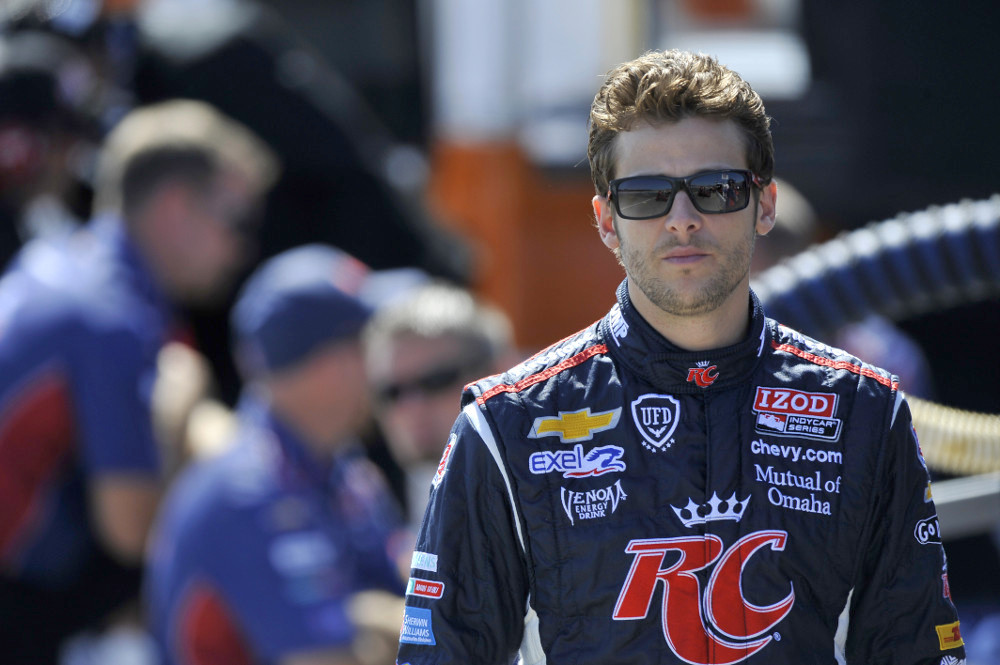 THE MODERATOR: We'll get started with today's media availability. We are pleased to be joined by all four Andretti Autosport drivers of the Verizon IndyCar Series.

Ryan, we'll start with you. You won the race here in 2010 and you've started second in the last three of four races here. Qualifying is obviously very important. Just how important is qualifying here at Long Beach?

RYAN HUNTER REAY: It's huge. It's great to be back at Long Beach, though. This is one of my favorite events of the season. Like any street circuit, though, you need to qualify well to have a good shot at it, so it's really it really just falls into the street circuit template that way. We're all trying to get up front, and especially with the standing start, I think it'll be important.

THE MODERATOR: Marco, you had a best finish of sixth here in 2009 and obviously your family history here is well noted. Does that family tie make this track more special for you?

MARCO ANDRETTI: Yeah, absolutely. This is on my wish list. This is a big race for me, probably second to Indianapolis that I want to win. My dad and I were talking about it on the way here how cool it would be to have three generations win at one track. Definitely not pleased with my Long Beach record so far. I had a fun race last year from the back, but like Ryan said, qualifying is important, and we caught an unfortunate penalty last year, so I had to start 25th and I think ended up 6th or 7th. But I think hopefully we can advance to the Firestone Fast Six and try to get the job done from there.

THE MODERATOR: James Hinchcliffe, best finish of third here in 2012, fastest in the first practice today, same thing a year ago. How do you translate that speed over to qualifying and then the race?

JAMES HINCHCLIFFE: I wish I knew. No, I mean, the biggest thing about these street circuits is trying to stay ahead of the track. It's one thing to be quick in the first practice, but the track evolves, you need to evolve the setup and kind of stay one step ahead of it, and that's something we haven't been awesome at in years past. We just missed the Fast Six last year, but the United Fiber & Data car was quick this morning, and hopefully we can stay ahead of things and put ourselves in position to be there for qualifying tomorrow.

THE MODERATOR: Carlos Munoz, in his first full season in the Verizon IndyCar season, won the Indy Lights race here last year from the pole position. Does that win help boost your confidence going into your first Verizon IndyCar Series race here?

CARLOS MUÂ¥OZ: Yeah, of course it helps me knowing that I could compete here in the past. It's totally different from the Indy Lights, this car. It's different. The car has different brakings and how the cars react compared to Indy Lights, but Indy Lights helped me a lot, especially I know the track, so it gives me a little more confidence.

Q. If any of you could weigh in on this, there's been a lot of changes this year to the series, new sponsor, and there's going to be at race in Indy, road course race, changes to qualifying, double points for the 500 mile races. Just looking at the whole season, how do you think collectively all these changes will help boost the series?

MARCO ANDRETTI: Yeah, I mean, there's a lot of things. Obviously from our standpoint, we look at it how are we going to adapt and try to basically just I don't know, adapt is the word. There's nothing you can really do besides that. But as far as how it's going to boost the series, I mean, Verizon, it goes without saying, like my grandfather treated, Verizon is our new favorite word, besides Snapple, of course.

But no, having a title sponsor like that with a background like that and a budget like that, it's definitely important to help drive they have the money to bring us hopefully where we need to be. As far as all the rule changes and stuff like that, that one is up to the fans. It really is. I'm not going to comment on it.

JAMES HINCHCLIFFE: I think Marco nailed it in terms of the rule changes and the competition side, that all remains to be seen. You'd like to think that's going to boost the series or else we're changing things for no reason. But there's no doubt that the single biggest thing is Verizon coming on board, and you've got a sponsor that not only has the resources and wherewithal to do it, they've clearly got the passion for IndyCar racing. They've been here for a bunch of years as a team sponsor, and now to take over the series and be in a position to really bring us to that next level, and I think they're the company to do it. That's going to boost the series tremendously regardless of anything else that we're changing.

RYAN HUNTER REAY: Yeah, Verizon, Verizon IndyCar Series. The big thing about the points situation, though, is one major thing that stays the same is you have to score as many points as possible. But it's more of a there's more of an emphasis on the 500 mile races and on the double headers, so we need to look at those, and like Marco said, adapt and try and be as strong as we can when it comes to those races.

JAMES HINCHCLIFFE: It sucks for us because the short track ovals have stayed exactly the same, and that's like our strongest track.

RYAN HUNTER REAY: We've waited for the double points at Milwaukee and Iowa.

JAMES HINCHCLIFFE: That's the only track that doesn't get anything else.

CARLOS MUÂ¥OZ: What they said, the three of them. If the series needs something to take it better, maybe some positive things they change for us, maybe some negative things for us, but we can change anything, so it's good like what they said, Verizon is really good for the IndyCar Series. Maybe not for this year but for the future, for the next generation. But not much to add to what they said.

Q. But do you think this will connect with the fans?

JAMES HINCHCLIFFE: What, the points?

RYAN HUNTER REAY: Absolutely, Verizon brings more eyes to the sport. It's all about initiating the proper marketing. That's what we haven't been doing.

JAMES HINCHCLIFFE: The racing was fine, the points were fine, everything was fine, it's just I don't think we're seeing it, so with Verizon, not only with them being the title sponsor and everything they're doing with advertising and all the rest of it, the technology they want to bring into the sport and the connectivity that they're going to bring to the fans I think is going to improve that. The rest of the stuff, it might or might not. It was almost irrelevant. The only thing that matters is that we now have a partner that has the ability to bring us to that next level.

RYAN HUNTER REAY: I need to get a Verizon phone. AT&T's coverage is horrible.

Q. Ryan, it looked like you had an interesting moment at the end of practice there at Turn 9 I think it was?

RYAN HUNTER REAY: You saw that? I was fully on the locks, just praying. Yeah, I was just pushing it there and almost lost it. Really pushing the car hard through that area. Yeah, I got beyond almost beyond the talent level and just hoping for the best.

Q. Guys, you have an extremely long off season coming up. I know it's way ahead of us, but have you thought about what you're going to do as far as staying in shape getting ready for the following season?

JAMES HINCHCLIFFE: Snowshoeing. It's an incredible workout, I think more than people think. And cold weather training is actually very good for the body, so I'm going to go snowshoeing.

Q. Are any of you guys going to test the Formula E car?

JAMES HINCHCLIFFE: Marco put his name on that list like every other driver. Getting it is probably the first step. I'd like to. It's got four wheels and an engine. I'll take it for a spin.

Q. This is not really related to you guys, but Gene Haas got approved today by the FIA for a U.S. Formula 1 team. Do any of you think that's something that will actually happen?

JAMES HINCHCLIFFE: Doesn't have a great track record so far, so the few data points we have to go off of don't point necessarily in the right direction, but who knows.

MARCO ANDRETTI: With Gene Haas I'd say it's the likeliest chance of it happening.

Q. Do you guys know any drivers that would be interested in driving that car?

JAMES HINCHCLIFFE: I don't know any of those, though.

Q. Carlos said he would.

Q. Speaking of Formula 1, this race is locked in for three more years, but there's a group that wants to bring Formula 1 here. Are you concerned or do you feel when the City Council looks at both sides that this is the best value?

MARCO ANDRETTI: They were supposed to go to Jersey, too. You mean on this layout? Formula 1 would never work.

JAMES HINCHCLIFFE: The amount of money it would take to make this permit approved and then the sanctioning fee on top of that, I mean, it would bankrupt California, so I don't really see it. It would further bankrupt California. And I'm happy about that; I would be sad if we lost this race.

RYAN HUNTER REAY: It's an IndyCar race. It needs to be. That's where the glory days were, and we're heading back there. The crowds are on Friday, this race is the best I think I've ever seen. Just getting here, we couldn't find a way through the crowd on a Friday.