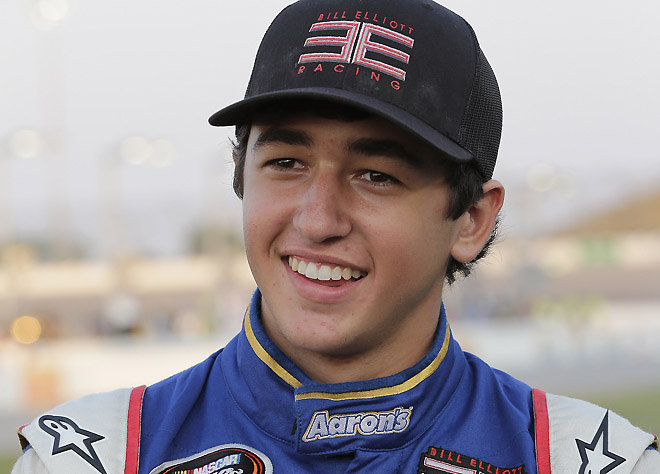 Chase Elliott obliged, laying a thick could of smoke from the exit of the tri-oval back to the flag stand.

Elliott had reason to celebrate. He had just beaten the top talents in the stock car racing universe, whipping around Kevin Harvick to the outside in Turn 4 to take the lead on Lap 185 of 200.

Ultimately, Elliott would pull away for the victory, finishing 2.666 seconds ahead of Kyle Busch, who ran second. Kyle Larson came home third, followed by Harvick, who lost ground after the last restart on Lap 178 of 200.

Elliott's team owner at JR Motorsports, Dale Earnhardt Jr., finished fifth. Both Busch and Larson started from the rear of the field after failing to clear inspection before the first round of Friday afternoon knockout qualifying concluded. Elliott took the series lead by two points over JR Motorsports teammate Regan Smith, who ran seventh.

Elliott, the NASCAR Next graduate, claimed his first national series win last September in the NASCAR Camping World Truck Series at Canadian Tire Motorsport Park when he became that series' youngest winner at the time. Erik Jones eclipsed that mark at Phoenix last fall. Elliott now becomes the second youngest driver to win in the Nationwide Series, behind Joey Logano.

Harvick won the pole in the qualifying session. He also gave Elliott some advice that may have come back to haunt him.

"I can't it believe it, man," Elliott said after climbing from his car in Victory Lane. "It's crazy. I went to him (Harvick) for a lot of advice this week, and helped me out, gave me some tips. … To pass him for the lead is really crazy. I can't believe it. It's awesome, and I can't thank everybody enough."

"I'm about speechless," Elliott said. "I can't thank Rick Hendrick, all the guys at HMS (Hendrick Motorsports), JR Motorsports for pulling this deal together, and (sponsor) NAPA for putting together at the last minute. Everything was on the fence all the way till January.

"I keep saying it. Never to have been at some of these places like Vegas, California and now here at Texas, and to come out and beat the kind of guys he beat — I'll tell you what, you've done a heck of a job."

Harvick led the first 86 laps, but lost the top spot to Busch in an excellent three-way battle that featured the same three drivers — Harvick, Busch and Larson — who fought for the win in Fontana, Calif., two weeks earlier, with Larson getting his first NNS victory.

Busch remained out front before and after the first cycle of green-flag pit stops around the midpoint of the race, but after a caution on Lap 121 for Chad Boat's wreck on the frontstretch, the entire complexion of the race changed.

Busch restarted with the lead after a round of pit stops under the yellow but lost the lead to Elliott on Lap 135. Complaining of a tight handling condition, Harvick dropped from second to seventh before his car started to cooperate.

On Lap 155, Earnhardt passed Elliott for the lead and quickly extended his advantage to more than two seconds before Jamie Dick's wreck on the backstretch caused the fifth caution on Lap 169.

Harvick, who had regained the fourth position during the 43-lap run after the restart, took advantage of a 12.4-second pit stop to retake the lead on pit road under the yellow. Coming to the green flag for a restart on Lap 178, Harvick led Elliott, Earnhardt, Larson and Busch, in that order, but that changed in a flash, as Busch dived to the inside in Turn 1, outdueled Larson for third and charged after Harvick for the second spot.