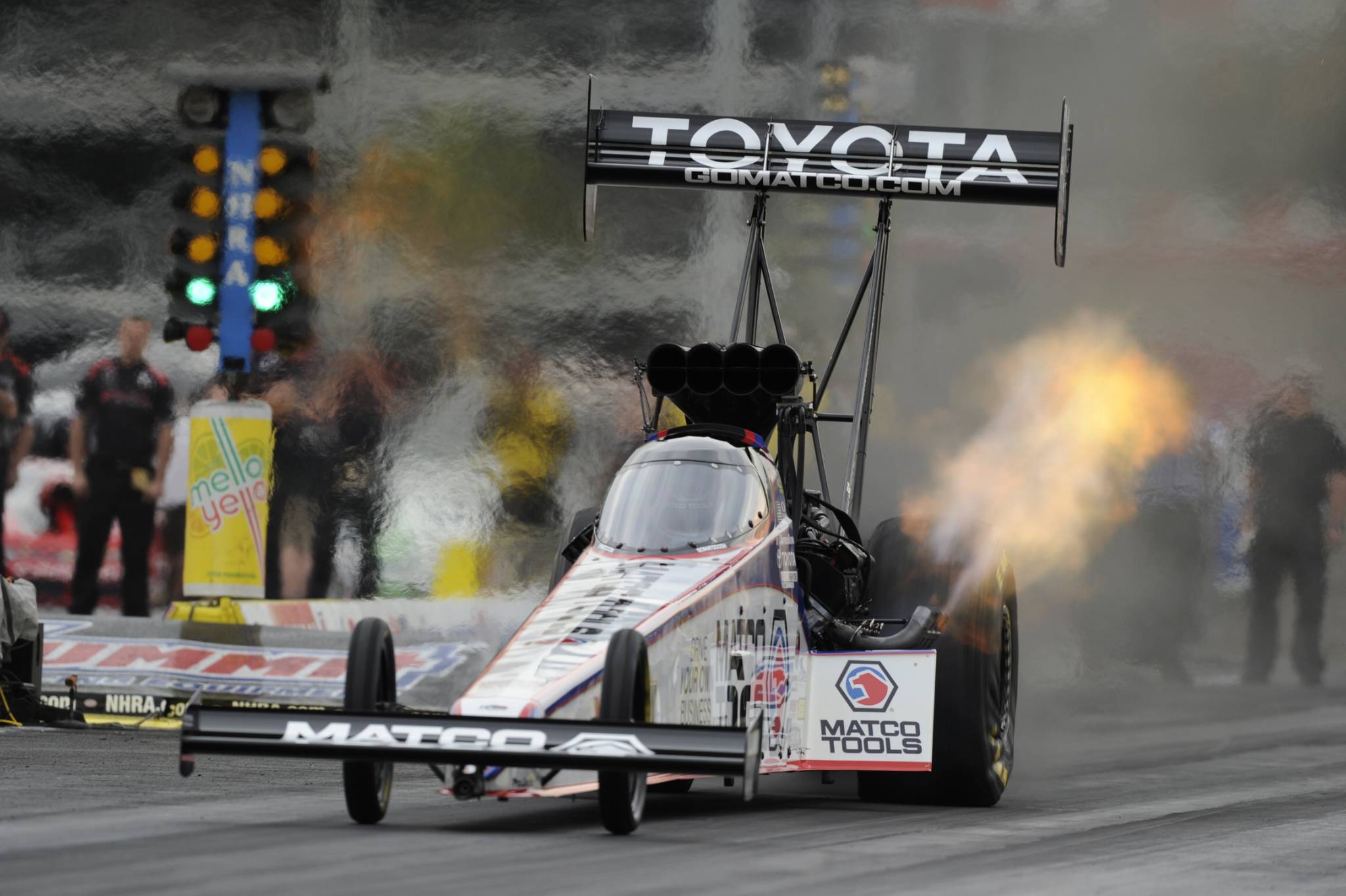 Brown secured his first No. 1 qualifying position of the season and 35th of his career with his 3.768 at 325.14 in his Matco Tools dragster. Brown’s 3.7-second run was one of five 3.7s during the final qualifying session and the Don Schumacher Racing driver snatched the top position from series points leader Doug Kalitta on the last pass of the final session.

“You could see as the track got tighter the crew chiefs were getting it together and we saw some phenomenal runs," Brown said. “Doug put that 3.77 on the board right in front of us, so I knew it was time to get to work. We had just been picking at it, but I saw my boys go into the box and make some adjustments I just said, 'Uh oh, here we go. This is where it gets good,' and it just went A to B."

Brown will face Mike Strasburg in the first round of eliminations. The 2012 world champ has two wins at Las Vegas including last season’s fall event and will be going for his second straight win at the track.

Kalitta, who won the Amalie Motor Oil Gatornationals two weeks ago, qualified second with a 3.775 pass at 321.88 in his Mac Tools dragster. The Ypsilanti, Mich. native held the No. 1 qualifying position for one pass before Brown’s top run. Kalitta will face Steve Faria in the first round.

Steven Chrisman failed to qualify for the event, while Scott Palmer made the field but was disqualified following his third oil-down of the weekend when he engine blew up during his final pass in Saturday’s second session.

In Funny Car, Force set track records in both elapsed time and speed with her performance of 4.006 at 325.37 in her Traxxas Ford Mustang Funny Car. Force’s top speed was also the fastest speed for both nitro classes.

"I was waiting for dad [John Force] or Matt Hagan to take it from me," Force said. "When I got out of the car, I didn't realize the speed was 325 mph. It's pretty [amazing to see] the 325 mph run was not only the best in Funny Car, but Top Fuel, as well."

Force has struggled to open the season but feels that her team may have turned a corner following a semifinal showing in Gainesville and the No. 1 qualifier here.

“We struggled a little bit at the beginning of the season," said Force, who was runner-up at both Las Vegas events last season. “Coming out here, it felt good to have a consistent race car back and be at a track that we've had some good luck at in the past."

The 2012 Automobile of Southern California Road to the Future Award winner secured her first No. 1 qualifier of the season and fourth of her career. She earned a matchup with Jon Capps on Sunday.

Force’s 16-time world champion father John qualified No. 2 with his 4.017 run at 317.87. The Castrol GTX High Mileage Ford Mustang driver will face Paul Lee in the first round of eliminations.

In Pro Stock, Coughlin topped the leaderboard after the first day of qualifying with a 6.625 at 208.78 in his JEGS.com/Mopar Dodge Dart and the run held up through Saturday’s two sessions, giving him his 20th career No. 1 qualifying position and first of the season.

“I'm really proud to hold onto the No. 1 position," Coughlin said. “I think it really shows quite a bit from our team. We've been hustling the last month-and-a-half getting these new cars ready."

The defending world champ will meet No. 16 seed Mark Wolfe in the first round. Chris McGaha, who secured his first career No. 1 qualifier at Phoenix, was close to a second top spot but will settle for the No. 2 seed in his Harlow Sammons of Odessa Chevy Camaro. The Odessa, Texas native ran 6.625 at 208.07 and will open eliminations against Rodger Brogdon.