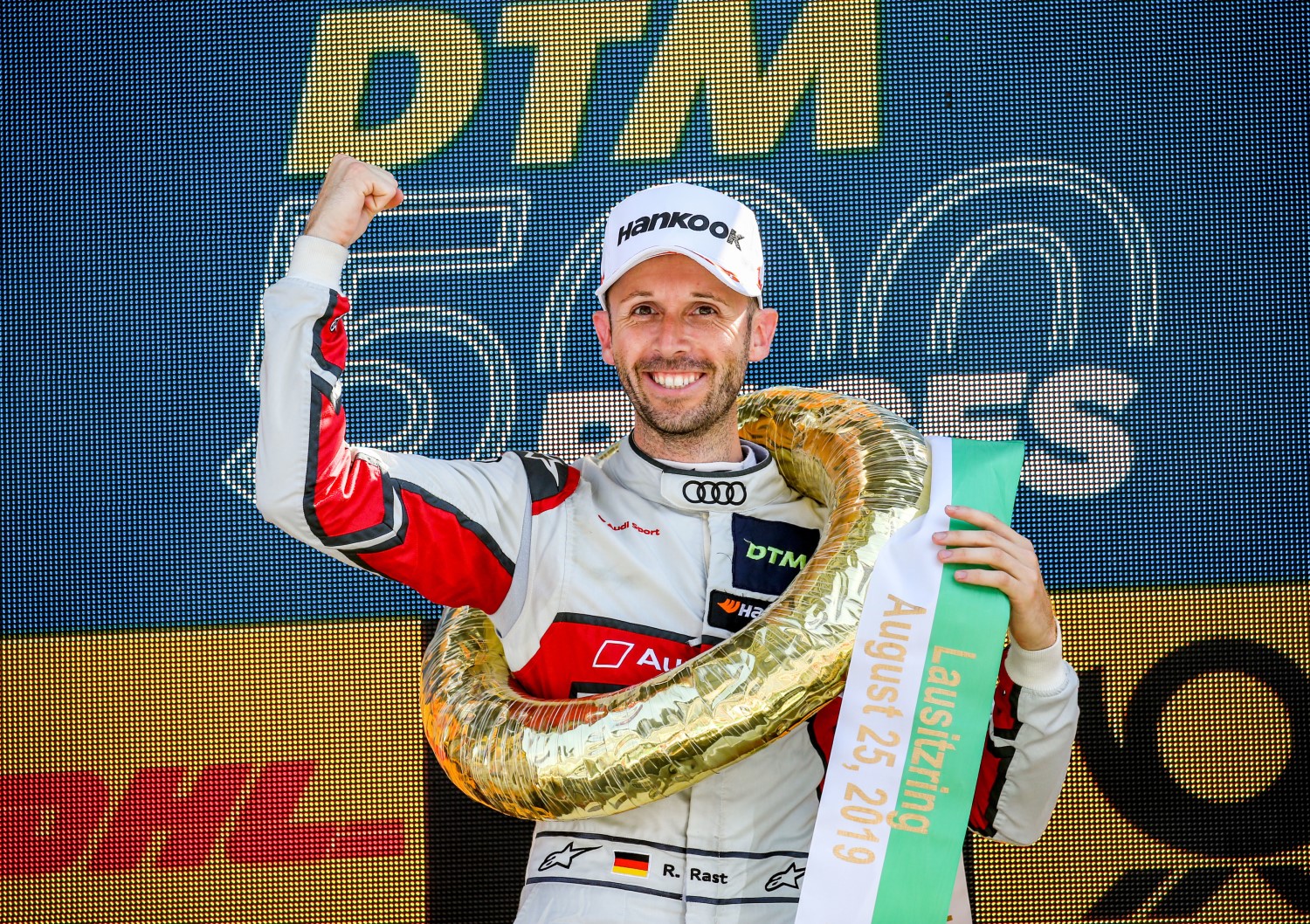 Rene Rast became the winner of the 500th DTM race, after Audi dominated the weekend at the Lausitzring.

Just a day after his retirement from Saturday’s opening race, the Audi driver struck back in today’s celebratory event to claw back points against his chief title rival fellow Audi driver Nico Muller (SUI).

Rast (GER) won from Muller, who had taken full advantage of Rast’s mishap on Saturday to win the weekend’s first race.

Now, with four races remaining – two apiece at the Nurburgring and Hockenheim – the duel for the title looks most likely to boil down to a thrilling duel between the two Audi drivers.

Rast (234 points) ceded some of his advantage at the Lausitzring, and is now a slender 20 points ahead of Muller (214). With BMW drivers Marco Wittmann (GER/167) and Philipp Eng (AUT/140), as well as Audi’s Mike Rockenfeller (GER/138), there are five contenders still mathematically capable of winning the title.

Another title, meanwhile, has already been sealed. With a clean sweep of the top five positions – behind Rast and Muller, Rockenfeller rounded out the podium, as he had on Saturday – Audi were the early victors of the 2019 manufacturers’ title.

In front of an impressive crowd, and at temperatures hovering around the 30-degree mark, Rast laid the foundation for his victory at the start. The 2017 champion immediately moved up into second place from fourth on the grid, but Muller suffered a horrible getaway due to a clutch issue, and finished the opening lap down in a lowly 10th place.

After four laps, Rast overtook his team-mate Jamie Green (GBR), who gave the German the position, and Rast consolidated his lead for the remainder of the race. It was Muller who was made to work for his result, working his way back through the order and making the undercut work with an early pit-stop. Benefiting from light tire wear, he was able to establish himself in second place to the checkered flag.

Uniquely, Muller has scored points in all 14 races so far this season. And for the third time, Rast won on a Sunday following a retirement on the Saturday.

Qualifying: Muller and Rast together on the second grid row, pole position for Green

In qualifying, the duel between Rast against Muller entered its next round. With third place on the grid against Rast’s fourth position, Muller just had the upper hand and scored an additional point. Green, already a three-time race winner at Lausitzring, claimed pole position, but missed out on a podium finish after losing time during his pit-stop. BMW again had difficulties against Audi’s current dominance. With Wittmann, once again the best-placed driver for the brand from Munich, and Eng in sixth and 10th places respectively, the only BMW drivers to score points. Ex-Formula 1 driver Timo Glock had to retire early.

Again, the privateer Audi team WRT deserved the greatest acknowledgement. In qualifying, South African Jonathan Aberdein caused a major surprise with the second-fastest time and a slot on the front row of the grid. In the race, Aberdein worked hard and finished sixth while his Brazilian teammate Pietro Fittipaldi again scored points by finishing ninth following his seventh place from the previous day. Aston Martin, meanwhile, remained empty-handed. Daniel Juncadella (ESP) briefly led the field during the pit stop phase, but didn’t score any points by finishing twelfth.

Rene Rast “That was a really perfect race, fitting for the DTM’s historic 500th race. I reckon that the start was the key to our success. My pace was just massive: I was directly behind Jamie (Green) and I knew that something good was in store for us today. After the pit-stop, I established a decent margin, but you can never be too sure. Nevertheless, the car was faultless – my mechanics were working on it all night, and did a perfect job."

Nico Muller “That wasn’t too bad in the end. We’d been having an issue with the clutch during the weekend – but I still felt certain that I’d be able to manage the start. Sadly, that was my mistake. After the early stop, my tyres were pretty worn towards the end, so I knew it was going to be difficult. I was able to slightly close up on Rene, but perhaps I’d saved the tyres too much. There are still four races remaining, and everything is still to play for. The pace is definitely there: we’re still in the game."

Mike Rockenfeller “Of course, I’m very happy. I started from 10th place and was on the podium again for the second time this weekend. That’s very good. My car felt overwhelmingly positive. This is a big day for Audi: three Audi drivers on the podium once again, and we secured the manufacturers’ title. What more do we want?"