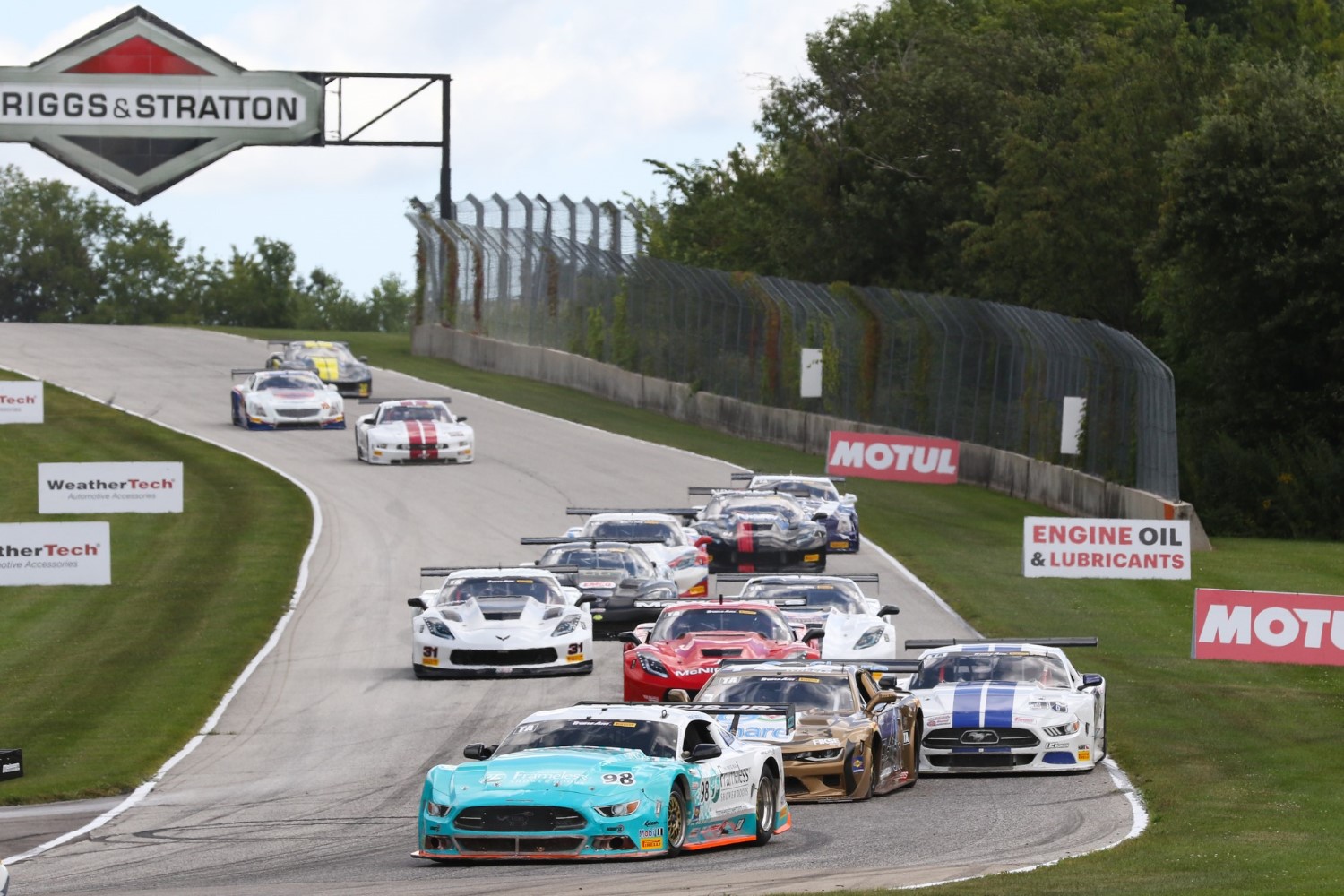 The 2019 Trans Am Series presented by Pirelli championship took a dramatic turn in the series’ 47th visit to Road America in Saturday’s Ryan Companies 100.

Ernie Francis Jr. scored his third victory of the season and captured the TA class championship lead in the No. 98 Breathless Racing Frameless Shower Doors Ford Mustang. Boris Said came home second, while Cliff Ebben completed the podium, with the Wisconsin driver of the No. 36 Stumpf Ford/Machavern Group/Lamers Racing Ford Mustang prevailing in a spirited late-race battle with Amy Ruman in the No. 23 McNichols Co. Chevrolet Corvette.

Francis run to victory followed a torrid early battle with pole sitter Chris Dyson in the No. 20 Plaid Ford Mustang.

The two cars were running within a half-second of each other before Dyson spun in his race-leading Mustang on the 10th lap in Turn 5 of the 4-mile circuit. The spin gave the lead to Francis, who was closely followed by popular veteran Boris Said in the No. 3 Elavon/Burtin Racing Chevrolet Camaro. Francis gradually built his advantage, winning over Said by 35.842 seconds.

“It was a real good race between Chris and I," said Francis, who made it two-in-a-row after winning at Mid-Ohio. “We were going back and forth with the fastest lap. Then lapped traffic began to play a factor, and I was able to close in a little bit and put on the pressure. Then, coming into the brake zone for Turn 5, he got a little too much wheel hop into it, and I was able to go around.

“After that, I was able to pull out a gap and maintain a decent pace to take it home for the finish," continued Francis. “I was keeping an eye on Boris. It was really great for points this weekend, and I couldn’t be prouder of the guys at Breathless Racing preparing the Frameless Shower Doors Mustang. The car was awesome all weekend. These are the kind of results we need at the end of the season, trying to pull out a championship."

Dyson entered Round 7 with a five-point lead over Francis in the standings. However, the New Yorker began experiencing problems early in the race.

“Unfortunately, we had a brake problem that was developing early on," Dyson explained. “It’s a shame, but around this place you’ve got to have your brakes working right. We had speed today. We were quick, even with the brakes not quite right. I’m frustrated with myself, and I’m frustrated for the team, but you can’t drive this place if the car’s not stopping right."

Dyson picked up a puncture on the early 10 spin and pitted. He worked his way back to eighth but spun again in Turn 5 on Lap 18, sustaining terminal right-front damage.

“We put a new left-rear on and went back out," Dyson said. “The brakes seemed to have come back, but then they rapidly, rapidly faded, and I was braking earlier and earlier. Then I got down to Turn 5, hit the brakes, and I had nothing. Rather than take out Cindi Lux in the car in front of us, I just ditched and grazed the wall, trying to minimize the damage."

Said was only three seconds behind the leaders when Dyson had his initial spin, but he also had mechanical problems down the stretch.

“I thought I had something for Ernie, but then we had a gearbox issue," Said explained. “In the end, I only had fifth gear and was nursing it to the finish."

Tim Kezman made a winning SGT debut in the No. 64 Fall-Line Motorsports Lemons of Love Audi R8 LMS.

“We jumped out front and had a pretty good run," Kezman said. “I had some pressure early on, but I stayed the course. The car was great. My first time in this car was in practice on Friday, and the Audi is a fun car to drive. Fall-Line does an amazing job preparing the car. We had some issues with traffic, but we managed to keep it clean and bring it home in one piece."

Kezeman won at Indianapolis in a Fall-Line Porsche, and finished third in that car at Mid-Ohio.

“I’ll be at the next race at Watkins Glen," Kezman said. “I’ll probably be back in the Audi, because I think it will be a great car for The Glen."

Jeff Courtney, the lone entrant in the GT class, finished 22nd overall to score his second victory of the season in the 99 Matrix/RecStuff.com/Kendra Maserati GT4.