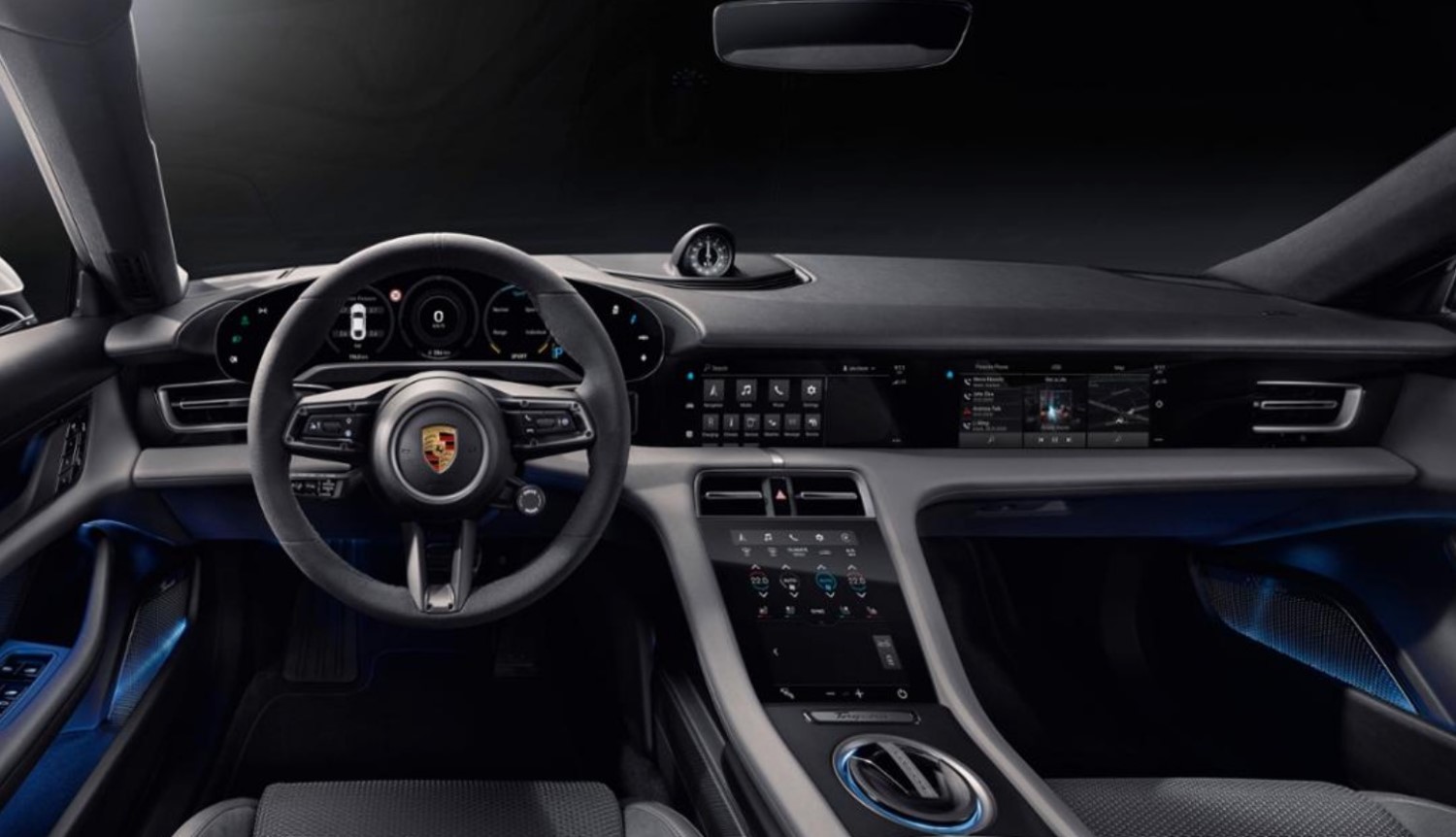 Porsche has unveiled the front seat interior of the Taycan electric car ahead of the vehicle’s unveiling planned for September 4th.

With the announcement that Porsche partnered with Apple to offer Apple Music streaming directly inside the electric car earlier this week, the German automaker released the first official picture of the interior of the Taycan.

If felt like a teaser ahead of the unveiling of the production version of the Taycan on September 4, but now Porsche is going a step further and almost releasing the entire interior of the car.

“Porsche is entering a new era with the new Taycan and the brand’s first all-electric sports car is setting standards in interior design."

It looks similar to the original Mission E interior with the screen extending to the passenger part of the car and the center console screen.

However, the passenger screen is optional. If you don’t order it, you only get the 10.9-inch center dashboard display.

The center console screen is a 8.4-inch touch panel with haptic feedback and it’s where you can access the climate controls and the seat settings.

Porsche also released a bunch of other details about the interior.

Digital, clear, sustainable: the interior of the new Porsche Taycan
08/23/2019

Porsche is entering a new era with the new Taycan and the brand’s first all-electric sports car is setting standards in interior design.

Classic design features have been reinterpreted and brought into the digital age. “Less is more applies here too," explains Ivo van Hulten, Director Interior Design Style Porsche at Porsche AG. “The Taycan interior combines design elements typical for the brand with a new type of user experience, and impresses with its simple elegance." Porsche will present the Taycan to a worldwide audience in September 2019.

Typical Porsche: a dashboard designed for drivers and a sporty seating position
The original 911’s cleanly styled dashboard from 1963 was the inspiration. The stated goal was to bring it into the present day. The cockpit signals the start of a new era with its clear structure and a completely new construction. It is clearly driver-focused. The instrument panel has a clean, minimalist and ultra-modern design, and operating the controls is quick and free from distractions. The free-standing, curved instrument cluster forms the highest point on the dashboard. It is clearly focused towards the driver and ensures that everything that’s needed for driving is in view.

The innovative instrument cluster consists of a curved 16.8-inch screen with the rounded look that’s typical of Porsche. A cowl has been omitted, which ensures a slim and modern appearance in the style of high-quality smartphones and tablets. Real glass and a vapor-deposited, polarizing filter give anti-reflective properties.

Drivers can choose between four display modes for the instrument cluster:

Classic mode (power meter) evokes the rounded instruments typical of Porsche. This display delivers information that’s clearly arranged information, allowing for fast readability. A power meter replaces the rev counter in the middle instrument.
Map mode replaces the central power meter with a map layout.
Full Map mode intentionally omits the round instruments in favor of a navigation map displayed across the full display.
The Pure mode displays only essential driving information such as speed, traffic signs and navigation using a minimalist arrow.
There are also small, touch-control fields at the edges of the screen for operating the light and chassis functions. The instrument cluster is therefore wider than the steering wheel and reminiscent of the iconic original 911.

The steering wheel has a light appearance, with two models to choose from. In addition to the basic version, which can be customized with coloured inserts as part of the accent package, Porsche also offers a GT sports steering wheel option. It has a distinctive design with visible screw heads and features a typical Porsche round mode switch which can be used to select the various driving modes.

The upper and lower sections of the dashboard stretch across the entire width of the vehicle in the shape of a wing. A central 10.9-inch infotainment display and an optional passenger display are combined to form an integrated glass band in a black-panel look, thereby blending in visually with the interior.

All user interfaces have been completely re-designed for the Taycan. The number of traditional hardware controls, such as switches and buttons, have been greatly reduced. Instead, control is intelligent and intuitive – via touch operation or a voice control function that responds to the command “Hey Porsche".

All vehicle configurations for the Taycan, such as Porsche Active Stability Management (PASM), can easily be set up on the central screen via direct access. The driver can quickly access all apps via a clearly structured and customizable home screen. Apps include navigation, telephone, media, comfort and Porsche Connect. With optimized voice control, drivers can access the required function even faster. For the first time, front passengers in the Taycan have the option of their own touch display, allowing them to easily alter settings without distracting the driver. – for example, using this second screen, the passenger will be able to perform functions locked off to the driver (typing destination addresses into the nav system, for example) while the vehicle is underway.

The elevated center console intensifies the feeling of a low seating position, as you would expect from a Porsche. It features a large 8.4-inch touch panel with haptic feedback. This allows the air-conditioning settings to be altered directly. Integrated handwriting recognition also allows quick address inputs.

Every detail has been reduced to the essentials. Like the Porsche 918, the Taycan has a compact direction selector switch in the instrument panel instead of the classic selector lever. This gives the center console a tidy look and creates storage space. A reduction to the essentials and a clear approach are also evident for the air vents. These have been fully modernized and can be operated intuitively. Traditional, mechanically-operated louvers belong to the past, as airflows are now controlled both digitally and fully automatically (“Virtual Airflow Control"). By clicking the Climate menu, it is possible to switch between “Focused" for fast, directional cooling and “Diffused" for draught-free air conditioning. If the optional four-zone automatic climate control system (“Advanced Climate Control") has been ordered, an additional 5.9-inch touch control panel with haptic feedback allows the system to be operated from the rear seats.

A wide range of personalization options and innovative material concepts
The Taycan’s color and material design allows for individualized equipment, from traditional through to sustainable and modern. There is also the option of classic leather as well as the sustainably tanned Club Leather “OLEA", which uses olive leaves in the tanning process. The natural quality of the leather is accentuated by means of a special cloud print. A new feature is the fully leather-free interior with state-of-the-art surface textures. “Race-Tex" material is used, a high-quality microfiber material partially consisting of recycled polyester fibers. Its production has 80 percent less CO2 than traditional materials. The floor covering uses the recycled fiber “EconylÂ®", which is made from, among other things, recycled fishing nets.

The Taycan is available with a wide range of interior and exterior configurations, in both traditional and modern styles. Interior accents and trims underline the attention to detail, while meeting the highest quality standards typical of Porsche in terms of material characteristics and workmanship. Interior colors Black-Lime Beige, Blackberry, Atacama Beige and Meranti Brown are exclusively available for the Taycan. The optional interior accent package also gives customers a choice of special contrasting color schemes in black matt, dark silver or neodyme, an elegant champagne tone. The doors and center consoles can be wood trim, matt carbon, embossed aluminum or fabric.

In addition to the host of innovations, there is another detail that no Porsche should be without. Similar to the ignition lock on conventional Porsche models, the power button is located on the left behind the steering wheel.