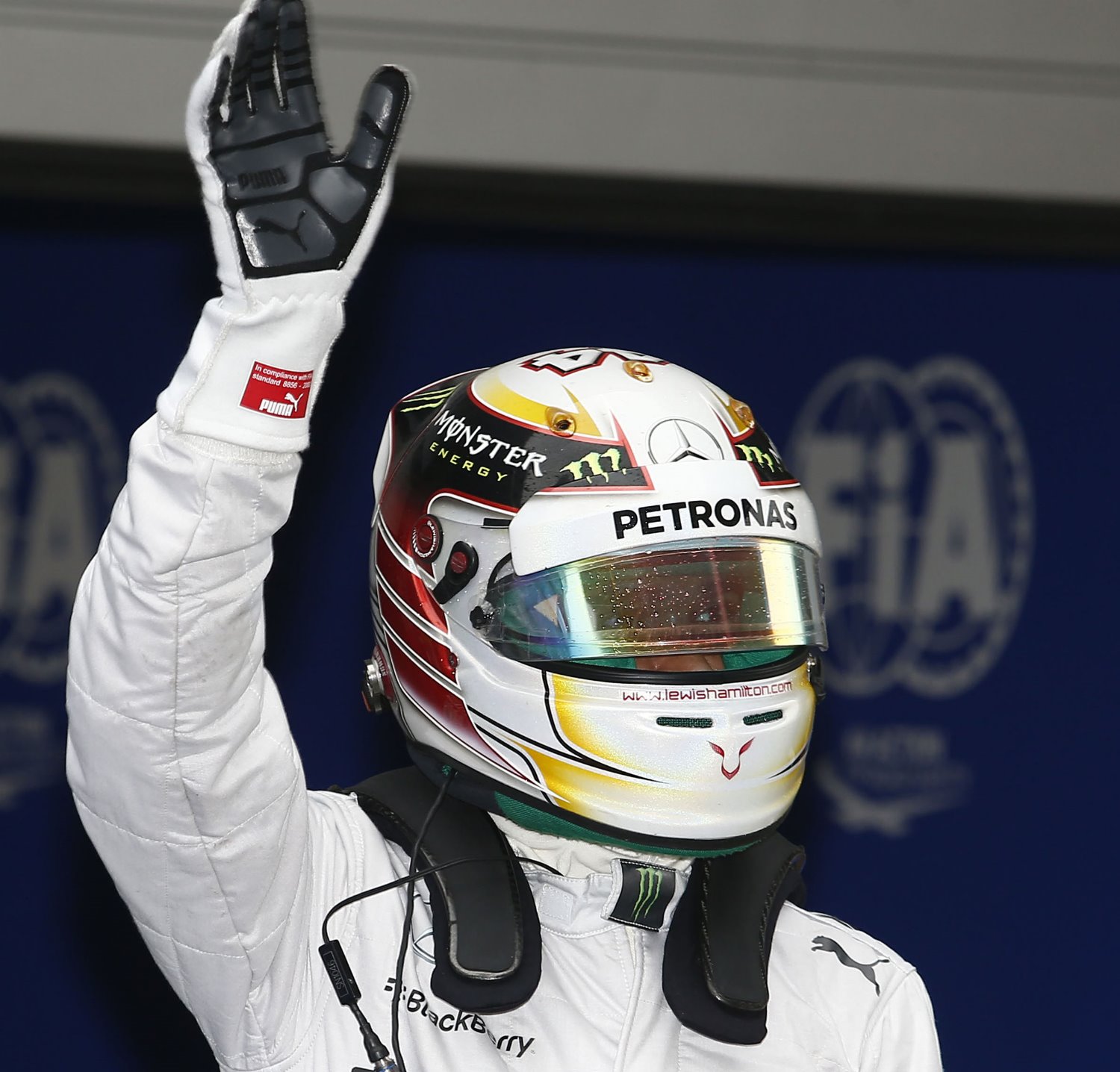 Mercedes' Lewis Hamilton claimed his third pole position of the 2014 Formula 1 season at the Chinese Grand Prix on a wet Shanghai track.

With the track wet, Hamilton went fastest on his first run in Q3 then improved by almost half a second on his second run to ensure pole.

He outqualified teammate Sebastian Vettel for the third time this season, as it's looking more and more like Vettel is resting on his laurels and has lost his edge. To say that Ricciardo is destroying him is an understatement.

Vettel will start third ahead of the second Mercedes of Nico Rosberg.

Rosberg had a chance for pole, but he blew it. Twice. On his 2nd run he carried too much speed into the hairpin, running wide and preventing him from improving.

A spin at the final corner on his final attempt meant that Rosberg could do no better than fourth.

Lewis Hamilton
It was a tough session today, but I really enjoyed it. It's definitely the most satisfying feeling to come away with pole position in these wet conditions because the track is so slippery and you need to find the grip to put the lap together. The car felt great and the team have done a fantastic job this weekend. Our rivals look closer in the wet conditions, so we'll be hoping it's a dry race to take advantage of the position we're in. We go into the race with a little bit of an unknown because after I struggled in practice on Friday. We made a lot of changes to the car and I haven't yet had a chance to try them in the dry. It felt pretty good in the wet, though, so I'm hopeful that we can convert our pole position into a strong race performance tomorrow.

DANIEL RICCIARDO
“I couldn’t have got anything extra out of the car on that last lap, I got everything I could out of it; for that I’m pleased and I got rewarded with a front row place for tomorrow. It took a while to get going in the session today, I didn’t have the comfort or pace that I was aiming for, but I got it at the end. I feel like I’m ready to get a good result, I know it’s never going to be easy but I’m prepared for the fight tomorrow and I’ll embrace it. I couldn’t have settled into the team any better to be honest, they made me feel at home very quickly and it’s helping me. I’m really enjoying the driving and it seems to be showing with the results. I’m really pleased. The team is closing the gap to the front and we’re getting better each race."

SEBASTIAN VETTEL
“In wet conditions, we have a bit more of a chance against Mercedes than in the dry. I think the conditions for tomorrow are forecast to be dry, but for sure we will try and do what we can. I think we are in the best position to try and give them a hard time in the race, so let’s see. We made some improvements with the car this weekend and I think the test in Bahrain helped, but we still have some work to do. I would like to be first of course, but I have a good position to start the race. Well done to Daniel today, he’s doing very well I have to say."

Nico Rosberg
I had two main problems today. I wasn't totally happy with the feeling on the brakes, which resulted in me locking up and going off on my fast lap on the second to last lap. Then on my final timed lap, I was half a second quicker going into the last corner – but my time delta on my steering wheel display said that I was two tenths slower. So I just took a big risk and spun because I mistakenly thought I had nothing to lose anyway. However, fourth place is not a disaster. I was quick on Friday doing the race preparation so I am still confident that there is everything to play for tomorrow.