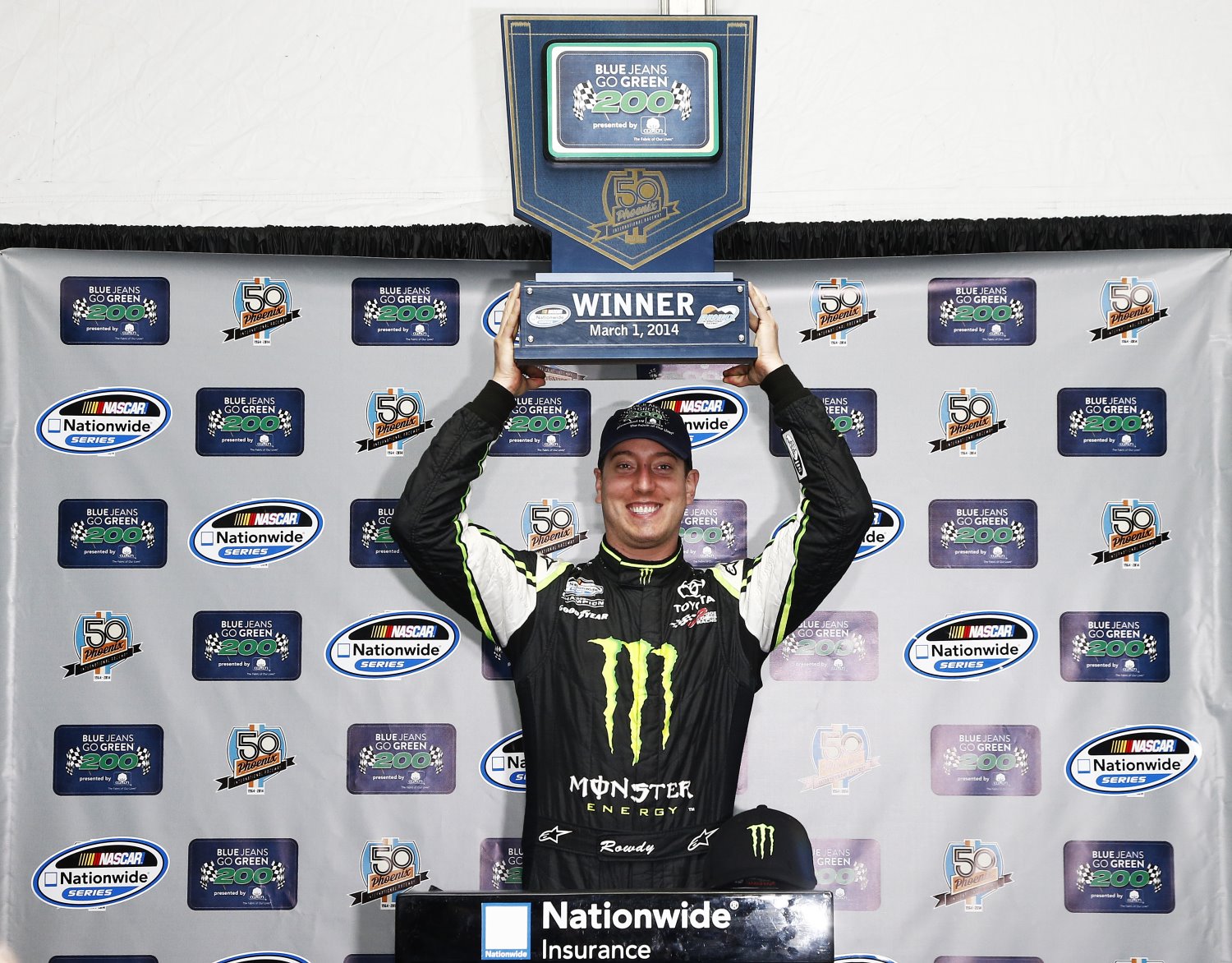 You can change the cars.

You can change the qualifying format.

You can change the weather from cloudy to sunny to rainy—multiple times.

But, no matter what you do, you can’t keep Kyle Busch out of Victory Lane at Phoenix International Raceway, at least not where the NASCAR Nationwide Series is concerned.

Busch’s first victory of the 2014 was his 64th overall, extending his own series record, and it was his first in a rain-shortened race in any of NASCAR’s top three series. Despite repeated efforts to dry the track, NASCAR ultimately called the event 32 laps short of its scheduled distance.

With a hard rain falling, NASCAR brought the cars to pit road and halted the race after Busch crossed the finish line to complete Lap 168, under caution for Ryan Reed’s crash into the wall that guards the inside of the backstretch dogleg.

"I think just the pure dominance we’ve shown here the last few times that we’ve come here and the amount of laps we’ve led with how fast our cars are is pretty phenomenal," Busch said after a rain-soaked celebration. "All the credit goes to Adam Stevens (crew chief) and everybody back at the shop.

"It’s fun to win them anyway. This is my first time winning a rain-shortened one. Welcome to the tent. I don’t know that it really made a whole lot of difference. We were really good. I would have loved to gone back out there after, but the weather wasn’t on our side today."

The driver of the No. 54 Joe Gibbs Racing Toyota had taken the point for the first time with a pass of polesitter Brad Keselowski on Lap 6. From that point on, he toyed with the rest of the field, extending his advantage to more than four seconds at its widest.

Kevin Harvick was second when rain halted the race, having passed Keselowski on Lap 160. Keselowski recovered from an accident on Lap 20 to run third. A tap from the pole winner sent Daryl Harr spinning into the outside wall off Turn 2 in a collision that also damaged the nose of Keselowski’s car.

The 2010 NNS champion restarted 27th on Lap 29 after pitting but worked his way forward and took advantage of his earlier pit stop to retake the lead, since most of the cars behind him had made green-flag stops for tires and fuel before the second caution slowed the race on Lap 90.

Harvick led briefly for the restart on Lap 97, but Busch regained the top spot on the restart lap and never relinquished it.

In his first run in the No. 88 JR Motorsports Chevrolet, Harvick was loose on restarts and soon fell approximately two seconds behind Busch.

"From there, we were just able to maintain," Harvick said. "But a good effort for the first time out. … Kyle had the best car today. We probably finished where we should have."

During three breaks in the rain, NASCAR put its Air Titan track-drying system to work, but three more intermittent downpours foiled the efforts to restart the race.

Is this a strong statement by your crew chief Adam Stevens to win four straight Phoenix NNS races?

“I think just the pure dominance we’ve shown here the last few times that we’ve come here and the amount of laps we’ve led with how fast our cars are is pretty phenomenal. All the credit goes to Adam Stevens (crew chief) and everybody back at the shop, all the guys at Joe Gibbs Racing, Joe Gibbs Racing Engines, Monster Energy Drink, Toyota and the Toyota Camry we drove here today. It’s fun to win them anyway. This is my first time winning a rain-shortened one. Welcome to the tent. I don’t know that it really made a whole lot of difference. We were really good. I would have loved to gone back out there after, but the weather wasn’t on our side today."

Are you glad to be in victory lane after the rain delay?

“It certainly has been a true testament to this team — Adam Stevens (crew chief) and these guys. We’ve been very dominant here in the past years and led a lot of laps today. I felt like we could have won it whether it was rain-shortened or whether we went the whole distance. It certainly was a great Monster Energy Camry and a great race for us. We battled hard with a couple guys and had a green flag stop today. All in all, it was meant to be for us I felt like, we just had to be able to put ourselves in the right position."

What did it feel like to wait two hours during the red flag for the race to be called?

“It made it harder because we were like, ‘Alright, come on, just call it, just be done with it.’ NASCAR did everything they could to get us back out there. We appreciate the fans being out here today. Unfortunately they didn’t get to see a full race, but we tried with what we could and Mother Nature just wasn’t on our side. I can’t say enough to be in victory lane today."